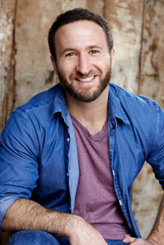 Why is it that adults love to go to animated movies? There was a time when they were seen as being exclusively for children, yet today, theaters are full of 18+ year-olds who are seeing G-rated films (and no, they’re not bringing their little brother or kids along). Ben Stranahan, an actor and executive producer for Tip-Top Productions, believes it’s because of two things: animated movies have improved in quality over the years, and every adult secretly has the heart of a kid. It’s why Ben has had such a good time being a part of The Inventor, the animated film that explores the life and inventions of Leonardo da Vinci. He has the spirit of a child, and he can’t wait to show audiences of all ages a world of wonder, exotic flying machines, and hope.

“The Inventor combines the best of Hollywood into one film,” Ben says. “It’s got the whimsy of animation, of course, and some really strong actors, including Daisy Ridley (Star Wars, The Bubble), Marion Cotillard (La Vie en Rose), Matt Berry (What We Do in the Shadows), and Stephen Fry (The Picture of Dorian Gray). More than that, though, it’s about one man who is famous all over the world but is actually much more relatable than you might think.”

Da Vinci, of course, was insatiably curious and constantly studied the world, trying to answer the questions that were ever-present in his mind. Incredibly enough, though he lived in the 15th and 16th centuries, he conceptually invented the parachute, the helicopter, and other marvels far beyond his time.

“Let’s not forget his artwork, including the Mona Lisa,” says Ben. “Yet, as brilliant as da Vinci was, he was only human. He had the same questions that we all struggle with, such as the meaning of life. That’s part of what the film explores: da Vinci’s desire to understand life on a much deeper level.”

Ben says that he has had a great time acting in and executive producing The Inventor and that showing up for work each day has been pure pleasure. The cast and crew have developed a strong bond with each other, with a lot of good-natured pranks pulled behind the scenes.

“The movie itself has some great comedic dialogue. More than once I have had to do a scene again because I couldn’t keep it together and started laughing due to the brilliance of the script,” he reveals. “That’s just one of the hazards of the job, I guess.”

The Inventor represents one of Ben’s more comical movies. Since taking courses in piano at Boston’s Berklee College of Music and graduating from the American Academy of Dramatic Arts in Los Angeles, he has built an extensive resume in Hollywood. Ben’s 2016 thriller Mean Dreams, starring Bill Paxton, Sophie Nélisse, Josh Wiggins, and Colm Feore, premiered at the Directors’ Fortnight at Cannes and as a Special Presentation at TIFF. Mean Dreams was sold in over fifty countries and released theatrically in over ten countries.

His mystery-thriller Population Zero was equally praised, but it was Ben’s Netflix thriller Calibre that catapulted him into the inner circles of Hollywood. Calibre was nominated for four BAFTAs and won for Best Actor for Jack Lowden. Ben is equally respected in television, as he is the producer of The Midnight Anthology, starring Clancy Brown. Its pilot premiered at the New York Television Festival in 2015 and won the Artistic Achievement and Best Director awards.

2022 saw the release of Monstrous, with Christina Ricci, into theaters, and Ben is completing production of The Naked Umbrella, Nandor Fodor and the Talking Mongoose, and Better Than Yourself. And yes, The Inventor. In 2023, he plans to release The King Tide, a thriller that he will act in with Clayne Crawford (The Integrity of Joseph Chambers) and Francis Fisher (Awake, Grace and Grit) and produce.

Ben will miss the fantastic world of Leonardo da Vinci. “I use the word ‘fun’ a lot when I talk about the movie, but it’s true,” he says. “I’ve gotten to dive into a world with castles and forests and spend my days with princesses while wearing breeches and waistcoats. All while exploring a man who saw mystery and beauty in everything around him. I think audiences, including adults, will love it every bit as much as we have.”

Storytelling | Advantages and secrets of the art of storytelling