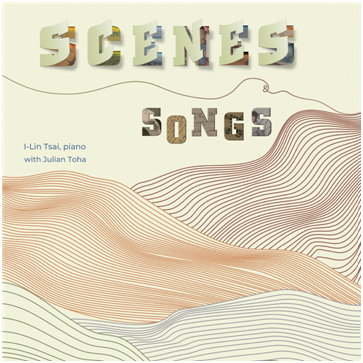 Scrolling through the classical and new age piano music genre of Apple Music usually ends up with a lot of standard recordings by competition pianists or crossover artists. Every now and then you get lucky and find someone who’s doing something different. Today I was lucky.

I-Lin Tsai launched her debut album called Scenes & Songs. It’s short and sweet, but packing a fresh punch to a genre that really needed it.

The most notable thing about this album is her arrangement of the JJ Lin Suite for Piano Duet that she performs with Julian Toha. This dream-like piece takes the listener from  high to low and back. Emotionally it’s very engaging and I found the arch created by the two pianists to be natural, yet clearly planned. Structural pianism has been out of style for most of the 1970’s, but legendary pianists like Glenn Gould and Van Cliburn built their careers around this type of playing.

Both I-Lin and Julian built the recording around this type of structural playing. Dynamics in the earliest part of the suite were constantly rising, yet they were clearly in proportion to the dynamics at the peak of the second movement and still relative to the overall climax in the final movement. The articulation of the performance was fitted to the hall and although it was obvious that they had only a few days to prepare, the pedaling between them was mostly fluid. The live recording element, for me, elevates the value of this recording substantially since it shows the impurities of live performance – a misguided transition, minor ensemble issues and a note being played incorrectly. But looking beyond the surface level impurities, what is absolutely clear is that this voyage into Chinese Pop Music is intriguing.

Chinese Pop Music or C-Pop aligns with all other pop music in its harmonic structure, song form and song topics (love, social settings, etc). This one song clearly elevates the album as a whole and I can see why I-Lin Tsai made this the centerpiece of her 2022 West Coast Concert Tour. I expect to see a lot more of this type of arrangement from her in the coming years as she continues to establish herself as a top pianist.

The rest of the album was well defined and prepared and felt mostly as though it was there to serve the Suite for Piano Duet by juxtaposition of late impressionistic and early to mid contemporary music. Although the tone of the album is contemporary, all music on this debut is tonal.

The Bartok Sonatina had an angular approach that seemed to always disrupt her own playing. Again, the shapes and the shift in style were unexpected, but had a clear purpose in the album as a whole. Those same angular shapes seemed to melt away in the lush texture of the Rachmaninov. The two played this as a duet again and the programmatic strategy became very clear at this point toward the end. The final performance was set to be overly improvised and maximally angular – almost like she set the scene for a final part of a movie. And that’s exactly what we got: chaotic highs and lows which is a spikey and spunky interpretation of this lesser known piece by Nikolai Kapustin. It was the overall thought and attitude that she brought to the program that I appreciated the most.

For more information on I-Lin Tsai and her tour dates, videos or to hear her on Apple Music and Spotify, visit her website at www.ilintsai.com