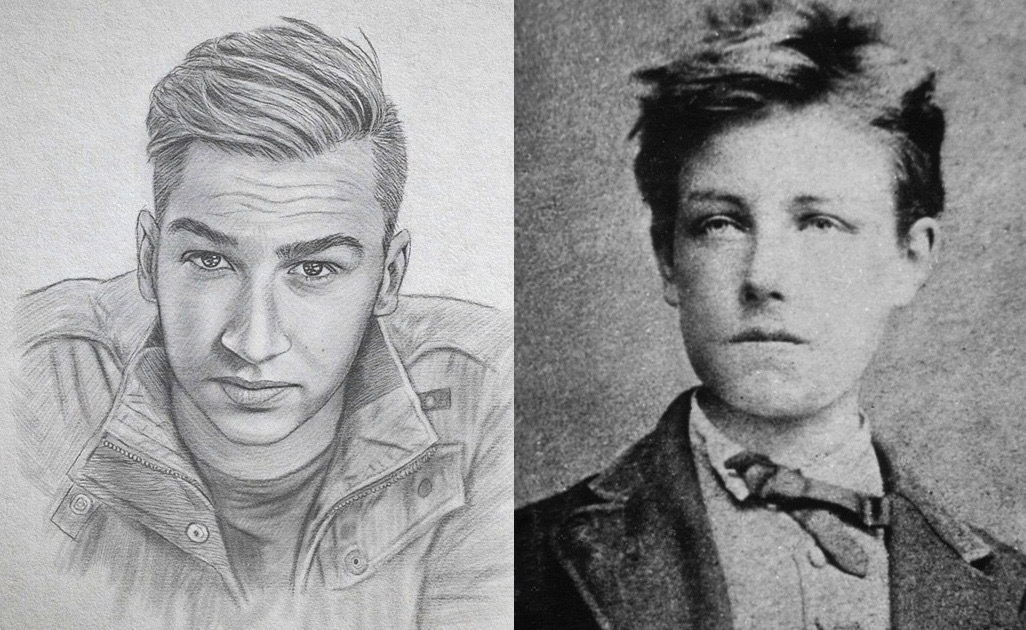 We all know the brilliant image of the french author Arthur Rimbaud as one bohemian artist of poetry. This eternal and young image can often be misunderstood, we can find it today with small differences in contrast, in Romania, where Claudiu Dumitrache (21 yrs) does everything possible to give his abundant creation of sensitivity, realism, surrealism, spirituality, romance , depth or prophecy as a young author.

Romanian  Dumitrache Mihai Claudiu is not at all like other young people his age, but he looks a lot like Rimbaud for several reasons that could make us believe that reincarnation exists. When we imagine a writer, we are reminded of the portrait of a man who has reached maturity, possibly going through a few trials of life, which can give birth to a well-informed literary work. Which does not mean that this rule is generally valid. There are literary phenomenal, the so-called “prodigy” in English, who wrote, finished and even published their first titles at an early age.After realising in 2018 his first book of poetry and philosophy “Boemia unui mort (A dead man bohemia)”, Claudiu Dumitrache dared in 2019 to publish “20”. He dared because it is a biographical book and because it seems a little absurd to have so much lived experience at the age of 20 that it is worth sharing in a book.

Although Rimbaud gave up writing poems after adolescence and then traveling to three continents to see the beauty of the world, cultures and places, Claudiu is not about to stop here . He also traveled in 7 months on three continents, in over 20 states and continues to roam the Earth singing, composing, writing only lyrics and performing unusual, bizarre activities, typical of a poetic and artistic genius.Claudiu’s creations are not too magnetizing for the general public, instead he is a favorite of artists, literary critics, writers, academics and anthropologists. Ștefan Lucian Mureșanu, professor, writer, philologist-anthropologist and ethnographer of the Romanian Academy, reviewed the volume “A dead man bohemia” in the form of a “Treatise in the absolute self”. He emphasizes that in Claudiu’s work there is “a chromatic meant to produce a maximum of ecstasy and to massify the smallest feelings, down to the apocalyptic.” Referring to the poem “Chemare (Call)”, Prof. Mureșanu states that “the verses of the call from on high to the sea of earthly life demonstrate the poet’s belonging to the world of the worlds”.

Valentina Vasile, Historical and writer, reviewed the volume “A dead man bohemia” through the work “Alternative of the present time”, in which she identifies Claudiu with great poets: “Life is for Claudiu the color purple. Here, we can identify him with the poetry of George Bacovia, who cried in purple, just as Macedonski had cried in purple before. ”
“Claudiu Dumitrache is a poet of the stars and the infinite, reminding us of Eminescu. Eminescu crossed the spaces of Luceafăr, Claudiu crossed the spaces of another demiurge, on Saturn’s ring. In the poem “Dansează-mă pe inelul lui Saturn (Dance me on the ring of Saturn)”, we can easily identify national and universal values, coordinates of Romanian and philosophical permanence, and all these are found in the entire volume of poems Bohemia of a Dead who is a life, a living and a faith.”
“Claudiu Dumitrache is a neosymbolist of the present time. His entire work is full of symbols.

Passionate about history and mythology, Claudiu, as a writer, introduced several mythological influences in his most controversial poem – “Slujitorii lui Apollo (Servants of Apollo)”, which he himself considers a frustrated poem, but critics are still trying to decipher ” enigma ”of the author and put a label on the innovative way of expression.
In 2020, Claudiu received the merit award for the volume “A dead man Bohemia” from Solitudinea Magazine – Literary Youth Magazine.

As for Claudiu’s life and education, he finished high school and he attended private singing classes, is a student of the School of Popular Arts “Octav Enigărescu” in Targoviște and graduated in Journalism and Personal Development at the British Academy of Business and Communication in Iasi, following courses accredited by the London School of Business and Communications .
He became a member of several artistic groups and New Age movements and was the co-founder of the Order of Light, continuing to educate himself, stealing experiences and secrets from people such as: Adi Gliga, Gabry Fortuna, Radu Groza, Vlad Sauciuc, Florin Apostol, Ioan V. Maftei-Buhaiesti, Ion Machidon, Marian Munteanu, Ozana Barabancea (from whom he “learned to breathe”) or various political leaders or cenacle writers.

His musical career has taken him so far on big stages, being part of the program with the band Alphaville, Faydee, Rona Hartner, Raoul (with whom he also released a Christmas song), Ace of Base Delia and the list goes on with many commas.

He relased several covers in Romanian for songs from other languages and enjoyed admirers such as: Dida Dragan, Romanita Iovan, Eb Davis, Michael Airington, Michaela Rose, Narcisa Suciu, What’s Up or Sheryl Schuman. In 2016 he released his first single entitled “Lumea Mea (My World)”, composed by him on the lyrics of a poem written by his mother .
He has won over 10 awards for excellence in music and the special award “Music AwardsTv”.
In his private life, Claudiu likes to read scientific research, to travel on the shores of oceans and seas enjoying rose wine, he loves to listen to classical music and to reproduce “Carmina Burana” sending smoke to the sky.

One of the burning desires of the young Claudiu Dumitrache, is to get to travel and stay for a year at the South Pole and the North Pole before the age of 30. Until then, when we consider Claudiu to be “bipolar”, he remains “a young man whose ingenuity far exceeds the barriers of the normal. His creativity is a visceral path between the artist and the lovers of beauty. Claudiu Dumitrache is part of that category of brilliant young people, eager and at the same time ready to make the most of the qualities he was endowed with in this world in which he was given the chance to resist. “- Dragoș Popa, Radio Romania.

Daily devourer of culture and art, passionate about journalism. I am here to express my opinions and to promote interesting topics from Romania.