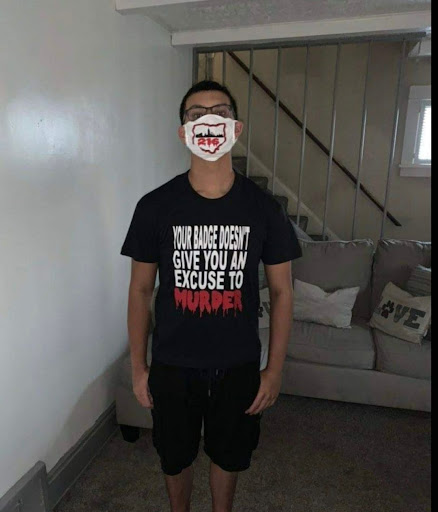 A shirt is a clothing item that can convey a message, but many don’t even notice unless someone compliments them in public. Some people wear them to make a statement, others wear them because that’s the first piece of clothing they see

Alonzo Knight is a ohio business owner. Cleveland’s Finest 216 is his shirt brand. Knight has been making shirts for over two years now and his business has been growing every day. From social media posts made by him to social media posts made by famous players, actors, and rappers like gucci mane, EC Marv Rick ross Tim hardaway sr. Tyrone facebook comedian Mr. Knight has created his own empire. His instagram account has over 30,000 followers ( @Clevelands_ finest216)

Mr. Knight. Created a shirt with a message against police brutality without spreading violence or hatred itself. Even though the shirt is peaceful and does not share any violence towards any group of people, Mr. Knight says that it has been a source of stress and concern due to all the Back the Blue members around the city of Cleveland. When asked, he said, “it has me concerned a little when it’s being worn, and I come into contact with law enforcement. Nowadays, they can shoot, beat, and harass you over anything so you never know what can happen”

Mr. Knight’s stated that his shirts/mask were wore at a homedepot blue lives matter rally and employees were told to take it off employees were sent home and some even fired over this shirt

“Everyone has a right to express their selfs regardless of how people might feel about my shirts it’s a fourm of protest having a badge isn’t a excuse to murder people cops that abuse their power need to be held as the same standard as us. -Mr knight”

CHECK OUT HIS brand /video game

How To Properly Safekeep Your Data using DropBox

David Martinez brings the coffee of the moment