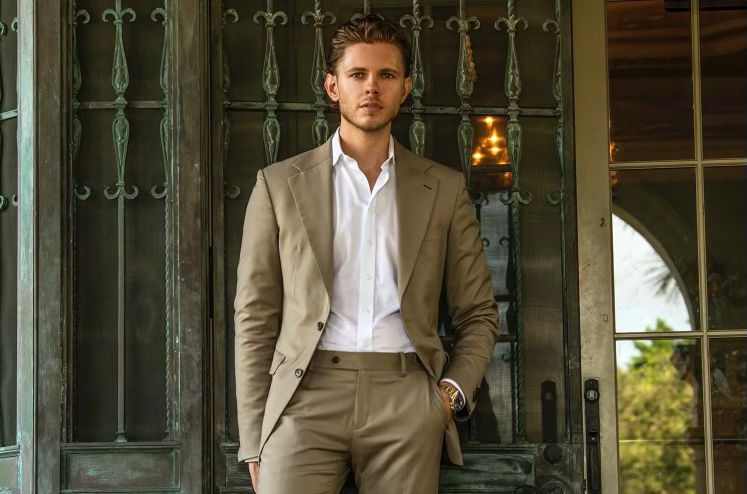 Two years before Adnan Dedic was born, his family was forced to flee their home in Bosnia in efforts to escape the ongoing oppression of the Yugoslav wars. After tirelessly fighting for their survival in Bosnia, Dedic’s parents were eventually able to reach safety in Koblenz, Germany. Six years after reunification, Dedic’s parents were presented with the opportunity to emigrate to the United States, where they could facilitate a safer and more stable life for their children.

“Before I was born, my mother, my sister, and aunt had to go into hiding in Bosnia after my father was captured by war authorities. They eventually managed to escape to Germany, and soon after my father was able to escape and reunite with them. Once my family was all back together, we packed one backpack full of clothes for my parents, myself, and my sister to share. These were the only possessions we had the means to bring into our new home,”- said Dedic.

Dedic and his family then took their single backpack and traveled to Utica, New York, where they settled in a Refugee Camp. During their time in Utica, Dedic’s parents worked about three jobs each, taking any work they could find to make sure they could feed him and his older sister. Though Dedic was young and knew zero English, he recalls vivid memories of the hard work he watched his parents endure, and how it would inadvertently predestine his own future.

“I remember my parents only getting three hours of sleep a night because of how many different jobs they were working just to keep our family afloat. Their struggles showed me the difference between living and surviving, and I promised myself that I would create a future that would be better for all of us one day,”- said Dedic.

The lessons Dedic learned through a childhood of adversity inspired him to fulfill the promises he made for himself, and it didn’t take long until he reached milestones beyond those he’d initially imagined.

“Growing up, I witnessed Adnan overcome physical injury, rejection, financial hardship, and countless people who told him he “could not,” yet he always persevered. Adnan proved repeatedly just how capable he was of achieving his goals, no matter the obstacle,”- said Spencer Scozback.

After his family reached a point of stability in Sarasota, Florida, Dedic went on to attend Florida Gulf Coast University to achieve his bachelor’s degree in Pre-Medical Health. However, an unexpected experience during his time at the University would end up becoming a catalyst for a new career direction.

As fate would have it, Dedic received an opportunity to pitch a business idea for a social media/fitness application to Kevin Harrington, a judge from the well renowned reality TV show, Shark Tank. Adnan’s presentation won him the title of “Young Entrepreneur of the Year” in the

Sarasota Buzzprize Expo Competition. This exposure caught the attention of an entrepreneur who saw Dedic’s potential and opted to take the young college student under his wing.

With the guidance of his new mentor, Dedic changed his career direction to entrepreneurship and real estate, where he knew with strong conviction that he would thrive. The humble beginnings Dedic once knew rapidly transitioned into a life of unlimited success shortly after he became a licensed real estate agent.

Today, he works for the top real estate company in the world, Compass. During his time with Compass, Dedic has doubled his transactions over the short course of six years, making over $50 million in sales in the year 2021.

Soon afterward, Adnan Dedic established his place as one of the top realtors in the nation as he consistently led in sales around Southwest Florida. According to the Real Trends Publication, he now stands among the top one percent of the 1.7 million licensed real estate agents in the United States. Additionally, he holds the title for a “5 Star Best” real estate agent on the well-renowned marketplace, Zillow, where his impeccable skill and efficiency are praised on a consistent basis.

“Adnan shows the most consistent hard work and dedication to his real estate business. Real estate is not a 9-5 job where you clock in and out, and Adnan really embraces that by always being communicative with his clients. He leans into being available and ready and moving quickly, which is critical with a market like the one we’ve dealt with over the past few years. He goes beyond just facilitating the process of buying or selling a home, and truly partners with his clients to help them understand the market so they can make the smartest investments for whatever they are  trying to achieve. That kind of work ethic is like a diamond in this industry,”- said Wesley Grainger.

To bystanders on the outside who do not know his story, it may seem that Dedic is primarily known for the work ethic he demonstrates in the present. However, for Dedic, his impeccable success will always be partially attributed to the very adversity he struggled through as a child.

“I think that growing up with a chip on my shoulder and experiencing what it was like to live through oppression and poverty primed me in a way that others who were more privileged couldn’t have been. It all comes back to my parents. I knew that if they could manage to create a comfortable life for my family after all they had struggled through, I could do anything I set my mind to. I will always be thankful for the importance of hard work that they showed me,”- said Dedic.

Dedic was undoubtedly able to demonstrate what his family’s struggles had taught him-that there were no excuses when it came to any obstacle that could hinder his success. His humble beginnings taught him self-sufficiency, resourcefulness, and impeccable resilience no matter the situation. For Dedic, if there was a will, he would always find a way.

“I lived with Adnan for a year when he first started in real estate. In the beginning, he did not have the resources, network, or experience that many of his peers had. What really set Adnan apart was his work ethic and resourcefulness. Adnan is always asking questions like how can we do this differently, or better than it has traditionally been done. Without people like Adnan who have the courage to challenge tradition in search of improvement, there would be no innovation,”- said Spencer Scozback.

Coupled with the resilience and strength of a rare, adverse childhood, Dedic is acknowledged for an abundance of traits that not only make him one of the most sought-after realtors in the country but one of the most inspirational. Through his many impressive accomplishments, he has become a mentor and valuable source of wisdom for those with dreams similar to his own.

“Adnan is not just a realtor, he’s a motivator. His story shows that it’s possible for someone to achieve what he has, on their own, no matter where they start out. His grit and determination to continue building a business in real estate takes serious mental toughness. Deals fall through, people change their minds, and it can happen after lots of work has been put forth. This can be especially frustrating, but Adnan always shows perseverance. His success and ability to overcome challenges in the industry speaks to his belief in himself and his fire to always find a way. He is the person I know I can go to when I need help working through any type of issue,”- said Alex Gunderson.

Dedic’s high-caliber transparency is frequently saluted in his mass of testimonials from both clients and friends. As a mentor, Dedic advocates for the trial-and-error method, regularly preaching to his peers about the importance of knowing it’s okay to fail, so long as you stand back up again and re-route your direction.

“Adnan is living proof of how dedication and fearless pursuit pays off, and that everything is a journey. He didn’t start in real estate and list a million-dollar property on his first day, it has been a progression of figuring out what works and what doesn’t. When things were challenging, he didn’t shy away. He dug in and stuck with it, and in this generation that is a hard quality to find.”- said Austin Kent.

As those who know him project, he is destined for greatness – those who don’t, can find solace in learning what humble beginnings like those of Adnan Dedic can produce. No matter where they stand in life, Dedic will serve as a source of motivation for people of all demographics as he builds his empire like the rose that grew from concrete.

In the future, Dedic plans to use his last name to create a multi-platform business, inspired by a play on words that uses his own surname, dedication. With DedicationX, Dedic will continue to work as a real estate agent that provides ideal service for his clients, while simultaneously expanding his efforts to mentorship, philanthropy and motivational speaking. Those who seek to create a life like Dedic’s may only look to the man himself for the dedication he intends to help our world in times to come.

To learn more and inquire about working with Adnan Dedic, visit the link. Adnandedic.com

How to Build your Brand on Amazon : A Guide for Startups

From Leading The Offense On The Field To Tackling Tech, Web3, And NFTs, A Founder’s Story with DeShone Kizer