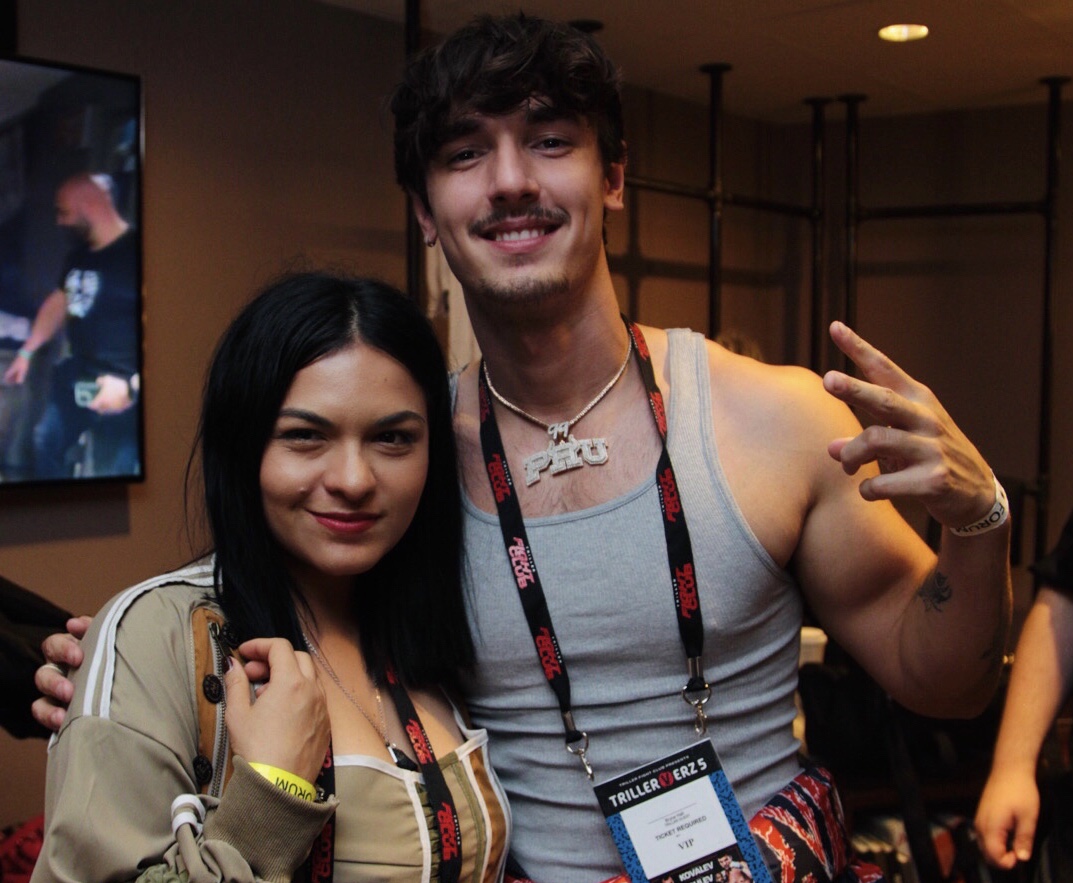 Bryce Hall told the Vargas Family he would give his $50K PAU chain to the brother with the fastest knockout.  Fernando Vargas Jr had the fastest so Bryce presented it to him in the ring. In true Vargas style, Jr gave it to the younger  brother Emiliano Vargas, whose knockout took only a few seconds longer. Brenda Valdovinos a.k.a Brendash V was supporting them at the ring.

Is currently working on her new Music label: Brendash Weddings, music based on healing sound techniques for wedding filmmakers that is totally different from her latest album “Kin” on Amazon Music, also there’s rumors about she will launch soon a new brand in the Metaverse this 2023, also we saw her during the night having a talk with Fernando Cavazos  2x Grammy Award Winner, 6x nominee Music Producer, Owner of Pig Sound Sound Studios, It looks like she is working a lot… and we can’t wait to see what’s coming up next.

There has been a lot of talk surrounding the three sons of retired world champion “Ferocious” Fernando Vargas. The boys — Fernando Jr. (25), Amado (21) and Emiliano (18) – all have high expectations and Triller decided to sign the boys to a multi-fight deal and give them a reality show. All they had to prove that signing them was the right decision. All three were featured at TrillerVerz and left with wins. Fernando Jr. needed only a round to stop Terrance Jarmon and Amado went the distance but was dominant against Anel Dudo. But it was Emiliano who has been praised by the family as the best of the bunch and he proved both his skill and star power as he annihilated Mark Salgado in the first round. He entered the ring to a massive ovation and didn’t disappoint as he pummelled Salgado. He earned, by far, the loudest pop of the night and it looks like we have a potential superstar on our hands.

Great Combination of Music and Boxing

Triller having Onyx vs. Cypress Hill was a great choice for a fight card headlined by Sergey Kovalev and Kubrat Pulev. The crowds liked the show and was very excited to see boxing, they really appreciate two legendary Hip Hop groups playing hits from the 1990s.

Jose Manuel de la Cruz is currently living in Las Vegas Nevada and now is one of the 2 Managers of the Vargas brothers. He is the owner of the company Grand Enterprises and been working in the industry for more than 15 years.

Music Artist Brenda Valdovinos a.k.a Brendash V is Getting Back In Action