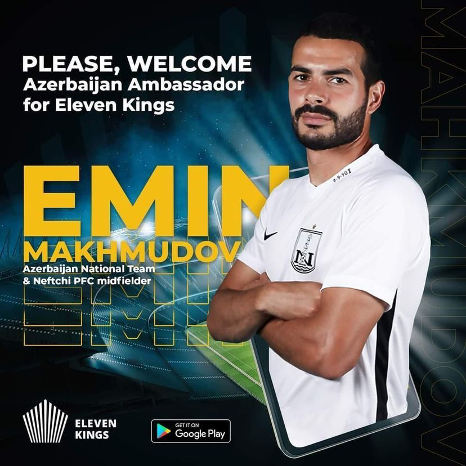 Eleven Kings is a successful gaming startup born out of the unquenchable passion that Orkhan Rzayev harbored within himself for gaming and entrepreneurship. It was founded in 2017 in Baku, Azerbaijan, and incorporated in March 2020 in Lausanne, Switzerland.

As the platform continues to get recognition worldwide, professional footballer Ronaldinho has signed up to represent the brand. The founders have also appointed Emin Mahmudov, a football midfielder from their home country, to become the brand ambassador of Eleven Kings in Azerbaijan.

The initial launch of Eleven Kings as a mobile game was not an easy road. Coming from a country like Azerbaijan where startups are rare, giving one’s life savings in order to realize one’s passion for a virtual gaming business is a huge move. However, despite the risks involved, it all paid off when the game became a global success.

While working for Eleven Kings, Mr. Rzayev says how it took all his fearlessness and determination to reach to the top. “The digital world has been a huge asset in helping me grow as a small upcoming business,” says he. Rzayev hopes to leverage the benefits that social media can offer in order to achieve his milestones.

The power of internet combined with collaborations with amazing social media influencers have helped the founder of Eleven Kings expand his horizons, increase brand awareness and widen the scope of the possibilities of his game for the future. In addition to that social media marketing and online brand reputation management have been a cherry on top of Mr. Rzayev’s efforts.

The founder of Eleven Kings says, “with the ample range of opportunities offered on the web, folks shouldn’t have any excuse for not having the ability to accomplish their dreams.” He believes that success comes to you easily when you stop worrying about the results and rather focus on working towards your goal.

In 2017, when he decided to launch a mobile game, he knew it would take a lot of sleepless nights and tirelessly working to make things happen. Mr. Rzayev says that he never compromised on the efforts that his dreams demanded of him and it is what allowed him to finally achieve what he aspired for.

With relentless perseverance and motivation as Mr. Rzayev continues to give his best to Eleven Kings, the gaming platform is gaining the attention it deserves and is already on its way to becoming one of the top games that will be known in the gaming world.