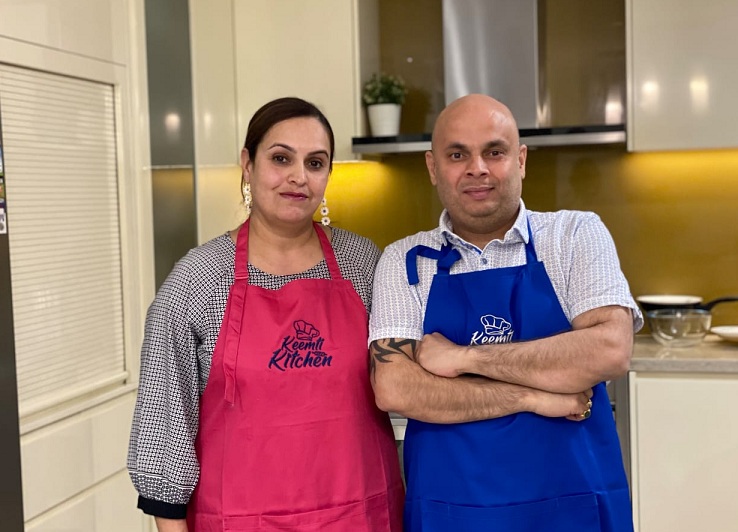 The smell of freshly prepared food is one thing that will never be out of trend. After the pandemic lockdown, this statement is much truer in our homes. Cooking recordings on YouTube were a boon for the people who were longing for delicious food while staying away from home.

One of YouTube’s Fastest-Growing Cooking Channels

In October 2020, Mrs. Keemti launched her own YouTube channel. “Jahan lagta hai pyar ka tadka vhi aata hai swad me mazza,” the motto reads. Her videos have over 6 million views and 38k plus subscribers in just about an year. Her popularity urged requests for online cooking classes for delightful Indian dishes from her fans. Last year, she taught several online classes with luscious curated recipes for students, particularly Indian students who live alone and are unable to travel for food.

Mrs. Keemti is one such home chef who has made her mark in the hearts of people and on the food plates, as the old saying, “The way to heart goes through the stomach”. Her beautiful plated dishes are a visual treat that everyone looks forward to. An accountant by profession and a home chef by passion, Keemti’s Kitchen or popularly known as KK has become extremely famous in a very short span of time. Keemti’s homely style of teaching and sharing her love for cooking along with her brilliant personality has attracted many cooks to her Youtube channel. For those who want to learn simple but delicious cooking, Keemti is becoming a legend to be with.

Keemti was born in India and grew up seeing her mother and aunts prepare special meals that she and her cousins licked their fingers over. She learned the value of spices from the time she was old enough to reach the cooking stove, coming from a Marwadi household where food was always given special care. She says that the scent of fresh dal-baati takes her back to her Indian roots even now (she is an Indo-Australian)

Mrs. Keemti also has connections in Bollywood and Hollywood; Kapil Sharma and other well-known celebrities have been familiar with her. Chefs such as Mr. Sanjeev Kapoor, Master-chef of Australia, and others are in contact with her. Her friendships include well-known cricketers also.

Today the number of her followers is increasing day by day and her unique way of narrating the recipe details has become her USP statement. Her passion for cooking has only increased in recent years. Keemti says she still has a lot to learn and is soon going to include nutrition-based specific recipes in her online classes. Her loving husband acts as a master taster, critic and her biggest fan. Her family and friends in Australia and India are often the first ones to give their honest reviews to her, which helped her to achieve excellence in cooking. Moving forward she aims to promote the simple art of vegetarian cooking in Australian cuisine(at her stay place). Keemti aspires to achieve her aim by making her recipes very simple and easy to follow so that everybody can learn and cook.

An exclusive Interview with a fisher of leaders from the crowd, Okanda Eugine, Founder of Unlock Young Leaders Summit

Coin Collecting: Should It Be A Hobby Or Investment?