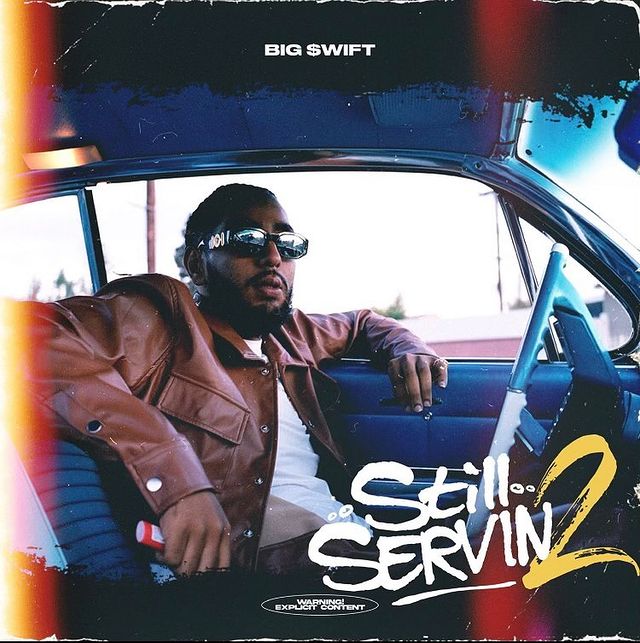 The production and assistance from these artists recall some of $wift’s more mischievous material. Still Servin 2 is a muscular introduction to the growth in the artist’s sound in the last two years.

The album’s roll-out accounts back to the first quarter when $wift took over the local scene with his infectious single “Jiggy” featuring Inland Empire’s Thirty2 and Too Jiggy. The Crook and Benny Ave production illuminated the artist’s ability to create captivating hooks even when accompanied by harmonious equivalents. “Jiggy is the banger of the project. That’s what took things to a new level for me this year. Shout out to Thirty2 and Big Ocho”. Said $wift.

The most recent visual offering, “I Don’t Like Y’all,”  directed by Cokeuh captures the southeast P roaming the streets of Little Italy. The name drops on the track require a close eye on the west coast music scene and the artist’s team, as the track was written on an ‘if you know, you know’ basis.

What makes part 2 different from the first offering, “Still Servin”?

“I think it’s just a better project. I tried to keep the same elements to a certain degree of how bold the first record is and having the yearly wrap-up from the homie at the end. But definitely feel like any time I do a Still Servin project, it’s a good compilation of my sound and lane at the time. I feel like I touch most bases on this project, so I can be more specific with other projects like Southeast P.”

Do you experiment with different producers when it’s time to put a new collection of songs out or keep a few familiar names in mind?

“I’m always down to work with new producers. Like on any level, as long as you have slaps. For Still Servin 2, I got a mix of some of my favorite people from the city. I always have to have my brother Saltreze on production, but I definitely have a group of homies I can call on, like Matt Bricks, BeatBoy, Mixed by Crook, Benny Ave, Villian –list goes on. But definitely want to shout out Meez and Louie for producing the “Nobody” record. That sh*t is so hard!”

What is your favorite song from the project?

Who is your favorite feature?

“Fasho gotta be the Rosecrans Vic ‘Blue Check’ song. If you wanna know what’s good with me, just listen to that.”

How do you go about choosing features for a project?

“I’m always real picky when it comes to features. I like finding artists or people I actually f*ck with. Like a n*gga can smoke a wood with you, and it ain’t awkward, or you ain’t no thirsty wierd n*gga . But Rosecrans Vic A&R’d the whole thing. Damn near executively produced it, to the point of connecting the dots for the features and canceling certain songs or convincing me to keep certain songs on there. Like, I don’t pay for features, so whoever you see on the album I fasho was in the lab with.”

Do you have tracks tucked away for the new year?

“Man, we got 2-3 projects in the cut recorded. (*laughs*) Crook and I got a collab tape. Me, Sal, and Z are working on Southeast pt. 2, BeatBoy and I are supposed to have something done soon,  and finally, I have a whole rap album with no autotune dropping at the top of the year.”

What are your plans for the new year?

“More ice, more money, more whips. The same sh*t traveling, but foreal just to flood the city with music. I’ve never done that in my career. I’m really all over the place when releasing. If I’m in a good head space, you might get two projects out of me a year, but I never stop recording. So I think just letting the clip go on sh*t I’d usually hold back on.”

Listen to “Still Servin 2” below.

Related Topics:AlbumHip HopLos Angeles
Up Next