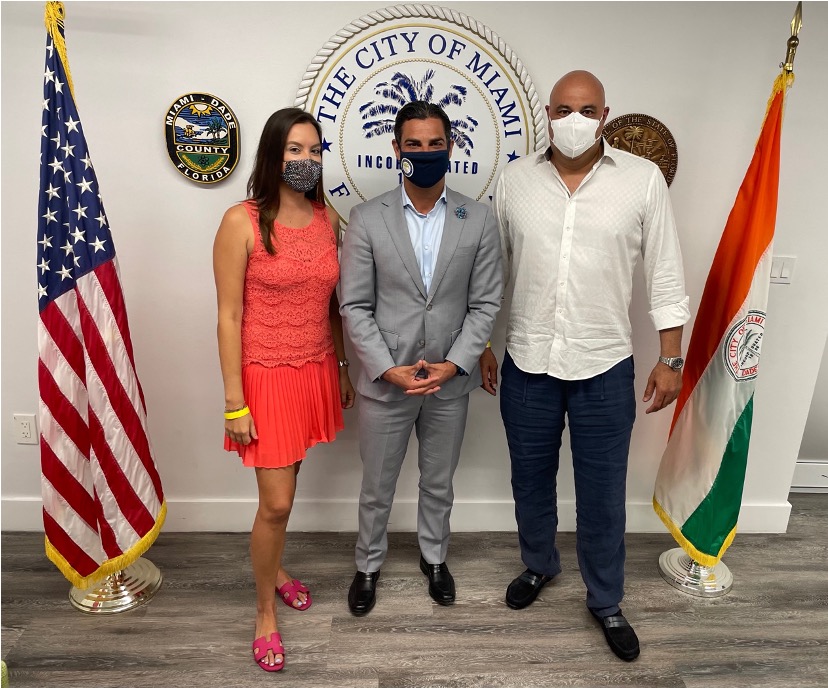 With the City of Miami hoping to attract more tech and finance firms and ultimately become a capital for cryptocurrency, Bitcoin of America CEO Sonny Meraban is working closely with Mayor Francis Suarez to expand the business throughout South Florida.

Miami Mayor Francis Suarez has big dreams of his city someday becoming the world’s cryptocurrency capital, and Bitcoin of America is doing everything in its power to help turn those dreams into a reality.

In the wake of Mayor Suarez boldly stating in recent weeks that the City of Miami is positioning itself to become a major hub as a cryptocurrency capital, Bitcoin of America CEO and founder Sonny Meraban met with the South Florida leader this week to assist in the efforts.

Meraban, who recently celebrated his company surpassing the 1,000-location plateau across the county, announced plans to further Bitcoin of America’s expansion in Miami. Also, Suarez and Meraban held lengthy discussions about Mayor’s stated wishes of the City of Miami someday paying municipal workers in cryptocurrency and accepting tax payments in Bitcoin.

Bitcoin of America, the nation’s fourth-largest Bitcoin operator worldwide, is planning to add 184 more investing and trading ATM and tablet-format locations in the City of Miami by 2022. That expansion will take the company’s investment in Miami to approximately 200 locations throughout the sun-splashed South Florida city.

Bitcoin of America’s expansion in South Florida falls right in line with what is being called the “mass techxodus” of high-profile financial firms, tech companies and hedge funds leaving New York, San Francisco and Boston for Miami’s business-friendly climate. In part because of tax credits, low-interest loans or other economic incentives being offered, Miami has been able to recently land companies such as Blackstone, Citadel and Goldman Sachs, Elliott Management, Icahn Enterprises and the Japanese group, SoftBank. Also, numerous other startup companies from San Francisco’s Bay Area and nearby Silicon Valley have moved jobs and investments to sunny South Florida.

Mayor Suarez has said the recent relocation of thousands of Americans to South Florida and the growing acceptance rates of Bitcoin as a legitimate currency is interconnected. Thus, his push to help Miami attempt to become the world’s cryptocurrency capital.

Bitcoin of America, which has locations in 31 U.S. states and the District of Columbia, has certainly done its part to target Miami as an area for tremendous growth. With ATMs already established in landmark areas such as Wynwood Business District, Miami Shores and the Miami Design District and various Sunoco, Valero, Mobil and Marathon gas stations, Bitcoin of America already has 16 locations in Miami. That number, of course, is about to skyrocket as the company looks to get to 200 ATM locations by the end of 2022.

Registered as a money services business with the United States Department of Treasury, (FinCEN) Bitcoin of America offers Bitcoin ATMs, Bitcoin Tablets and an online exchange. Their hosting service proved to be a boon for small-to-medium-sized local businesses severely impacted by the COVID-19 pandemic and the subsequent downturn of the nation’s economy. Bitcoin of America’s host program helped to bring new revenue streams and growth opportunities to businesses that needed every bit of financial assistance they could get during the pandemic-related downturn.

If all goes well in the days, weeks and months ahead, Bitcoin of America hopes to work hand-in-hand with Mayor Suarez to help make Miami the cryptocurrency capital of the world.

How Alex Kleyner is Helping Households Who Are Counting On Store2Door.com For Essential Supplies