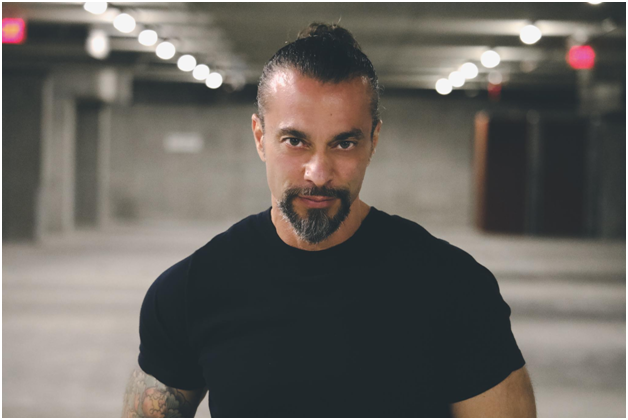 When people speak of doses, the first thing that comes to mind is usually drugs, medicine, or some sort of treatment. It’s not necessarily a term that one would associate with positive experiences or mindfulness. However, Mike Diamond puts a new spin on the word, with his podcast called A Dose of Positivity and his upcoming book by the same name.

Mike’s whole life revolves around educating, inspiring, and motivating people, whether they’re struggling with drugs and alcohol, or mental health issues, and helping them become the best version of themselves by leveraging the power of positive thinking. And he does that not by repeating motivational adages that we all know, but by passing on lessons he’s learned the hard way from his own personal experiences.

As someone who has come from a life of battling substance abuse and has managed to rise above his problems to ultimately become the strong and successful person he is today, there’s no one better suited than Mike to guide people on the road to recovery and give them the tools and strategies they need to overcome their challenges.

Mike Diamond is devoted to his mission of bringing value to people and helping them find their inner strength. For him, that’s what providing a dose of positivity is all about, and that’s what he does with every new project he takes on. And fortunately, Mike has great plans for the future and a bunch of exciting projects in the pipeline, as you’re about to see.

On the other side of the limelight

Mike came to public attention after moving from Australia to the United States and starting a career in the entertainment industry. Not long after his arrival on American soil, while living in South Beach Mike got a role in the CBS sitcom, The Grapevine, and then made the move to NYC where he got involved in various projects, including the popular shows Miami Ink and NY Ink. But as his career was reaching new heights, his mental and physical health continued to decline. Underneath the successful image that everybody saw there was a high-functioning addict who lacked purpose and was spiritually deprived. On top of that, Mike was also dealing with several health issues that he could no longer ignore.

Eventually, Mike realized that he had to do something to turn his life around until it wasn’t too late. Alcohol and drug abuse are difficult beasts to tame, but Mike wasn’t going to let substance abuse get the best of him. It’s then that Mike really started to live life consciously and began his path towards healing and real success. The journey was paved with many obstacles, but the strategies Mike employed paid off: he started attending AA meetings regularly, talking and learning from people with similar issues who managed to overcome them, reading self-help books, and getting the support and guidance he needed so much.

With patience and determination, Mike ultimately overcame his drug and alcohol addiction and healed himself from the health issues that were plaguing him. He even ran 30 half marathons in 30 days which landed him in the Guinness Book Record. From that point on, everything happened naturally. Mike started to use his knowledge and the strategies that worked for him to empower people and help them achieve their full potential. That launched Mike’s career as a motivational speaker and life coach and led to the materialization of several successful projects, including his book, 7 Steps to an Unbreakable Mindset, his podcast, A Dose of Positivity, and a supplement brand called Diamond Life Fuel.

New projects on the horizon

If you’re thinking that being engaged in so many activities would stop Mike from venturing into new projects, you’d be mistaken. His restless mind and enthusiastic spirit prompted Mike to search for new venues to bring that dose of positivity into people’s lives. So, let’s take a moment to explore Mike Diamond’s current and upcoming projects that all tie in with his purpose of inspiring, motivating, and educating people.

Mike has been doing his podcast A Dose of Positivity for quite a while now, which brings together lots of interesting guests, from celebrities to entrepreneurs or former addicts. What draws people to his podcasts is the approach he uses and the topics they address. Mike invites people who have compelling stories to tell and interviews them so they can share their wisdom and strategies with a larger audience. This gives people exactly what the title of the podcast suggests – that dose of positivity and the tools they need to find a solution for their problems. As Mike himself says, it’s about hacking the system by helping people find a way to better themselves in the shortest period of time possible.

But that’s not all, Mike plans to use a similar approach for his upcoming book. The relation to the podcast and his philosophy based on doses of positivity can be seen straight from the title. A Dose of Positivity is going to come out next year, on March 14th, through Matt Holt imprint under BenBella Books, and is going to be distributed by Penguin Random House. Just like the podcast, the book is going to focus on the power of thinking positively and teaching people how to regulate their levels of dopamine, oxytocin, serotonin, and endorphin naturally, by getting an empowering dose.

Mike is a firm believer that our bodies need the right kind of fuel in the right dosage in order to heal and thrive. He experienced the power of healing naturally himself in 2017 when he was recovering after stomach surgery. Unfortunately, at the time, there were no natural alternatives that would suit his needs, so Mike decided to create a supplement that was completely natural and would support him on his healing journey, and that’s how Diamond Life Fuel was born.

These supplements contain a powerful mix of ingredients that provide numerous benefits for the mind and body: turmeric for inflammation and gut health, vitamin C to support the immune system, and a hint of caffeine with three different nootropics for a natural dopamine boost. These supplements are perfect for everyone looking to improve performance, increase energy levels and enhance their mood.

Mike also highlights the problem with popular modern diets which are basically centered on a huge amount of calories that no one actually needs, unless they’re a professional athlete or bodybuilder. But as you may have already guessed, Mike is not one to point out an issue without trying to find a solution for it.

So, he came up with the concept of a healthy dose grill, which, like the rest of his projects promotes the idea of getting the right dose in order to live a healthy and happy life. His intention is to create a place where people can get food on the go, that’s clean and organic, and come up with a menu where all the bowls provide adequate caloric intake, whether they’re vegetarian or based on meat and poultry. Mike and his partner Bobby are already looking at some food hall spaces in Atlanta where they could put this idea into practice, and they hope to have everything ready by early January.

Tv shows in the works

Being no stranger to the small screen, Mike plans to put his experience in the entertainment industry to good use. Mike is in negotiations to shoot a documentary series. The main idea of the show  is to take a person with serious problems who has hit rock bottom and put them in an environment where they have access to all sorts of resources, from doctors to nutritionists and meditation coaches, so they can get their life together and reach their full potential. It’s a type of show that may take months to shoot and involves a lot of risk-taking, but for Mike, the possibility of exposing the shortcomings in the system and helping people overcome their issues makes it all worth it.

Make sure you stay tuned for more details on Mike’s upcoming projects because we can guarantee you don’t want to miss any of them.

Automotive Mechanic turned Mortgage Agent will Get You the Mortgage that’s Best for You!