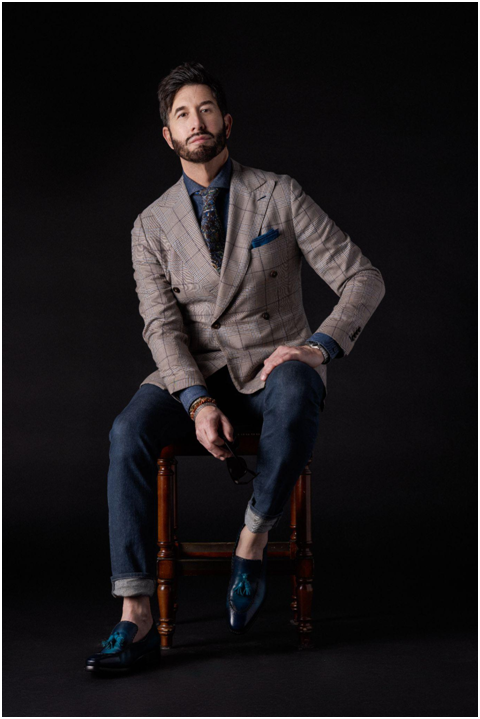 You could say that Daniel George was born to be a clothier. The creative director of the eponymous Daniel George bespoke suits brand seems to have been born with an innate sense of style and refinement. The launch of Daniel’s brand could not have been anymore organic and authentic, as he himself attests.

Daniel’s natural sense of style was only further enhanced by the influence of his own father, Richard. “When I was probably around 8 years old, my father would take me shopping twice a year for my wardrobe. My father was extremely stylish and had a very developed, extensive understanding of men’s fashion.. He just had great taste and was kind of like the playboy gentleman.”  Daniel explains what was ingrained in him early on.

To paint a clearer picture of how Daniel’s father shaped his own personal aesthetic, Daniel further emphasizes, “His taste and style were reflective of the seventies and early eighties and that really plays a big role in what I like today.”

It’s easy to say that Daniel and his father were cut from the same cloth – pun intended. In describing his father’s lifestyle, Daniel says, “He wore silk pajamas and monogrammed slippers. He smoked pipes and drove interesting cars. They’re what I like to call classics, but they were new back then. He just had really cool taste.” Clearly, Daniel’s father did not only influence his fashion aesthetic and preference for bespoke suits. After all, Daniel similarly has his very own bespoke British car collection. The suit, the car, the watch, the fragrance – Daniel grew up with the keen understanding that all these little details help make the man or at the very least, the image of the man. However, more than all that, one could say that this potent combination of nature and nurture continues to influence the very DNA of the Daniel George brand itself.

Back in his younger years, Daniel George may not have realized that his father’s style inclinations were not the norm for most men. Today, however, it’s certainly clear to him that not all men have that innate eye for style and knowledge of the finer things. “There’s just something that is not instilled in men today, even my age, but certainly not in younger men.”, as Daniel explains.

Fortunately, many men today are aware that they don’t know everything and need help, at least when it comes to their wardrobe. The smartest of those men know even better and go to Daniel George for sartorial assistance.

Daniel George, both the man and the brand, are determined that modern gentlemen carry that same sense of savoir faire from bygone eras, one bespoke suit at a time. However, Daniel clarifies that elegance is not synonymous with insipid.

Daniel knows that he is just like his clients, “I am dressing in a way that makes me feel great. It’s my personality.” That’s certainly far from uptight, boring, and passé. In Daniel’s own words, “We love providing the rules and we know them, but we help you break them, but only within your comfort zone”.

Daniel George suits are for men who not only want to look suave but also understand great value. After all, bespoke suits don’t come cheap but as the saying goes, quality is remembered long after price is forgotten. We’d even go further and say that a suit that delivers sartorial splendor is, in fact, priceless.

Cosmetic Surgery: A Blessing or Disaster in Disguise?