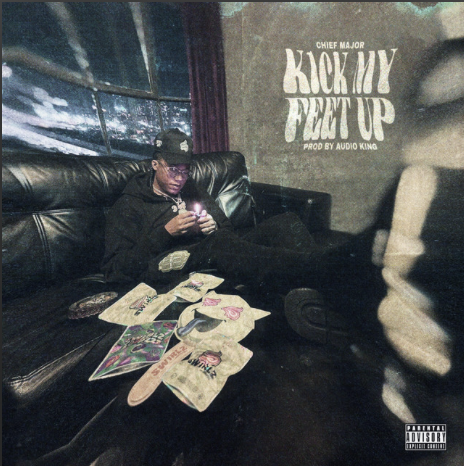 Chief Major has been putting it down for the West Coast music scene for many years. After a hiatus that included an unexpected name change (previously known as Flip Major), the Inland Empire artist Chief Major returns with a brand new single to reclaim his position beyond his hometown. “Kick My Feet Up” marks the artists first official appearance under his new stage name and under D.E.A.N Ent. The Audio King-produced track calls for all cannabis enthusiasts to kick their feet up and enjoy the vibe the artist is assembling.

Like most of his catalog, the hook on “Kick My Feet Up” is very easy going and captivating, surely one that will be stuck in your head all day.

“I kick my feet up, roll up and get high, and you know it’s a vibe.” The artist slows down the already mellow song towards the end of the track and proceeds to spark up fully setting up the vision behind the single.

The track encapsulates the artist’s laid-back personality perfectly. Chief Major is most known for how he frequently ranges from his provocative, stoner, and highly observational jabs. What nakes him so successful is that he is progressively growing through his unmatched work ethic.

The artist has remained consistent in elevating his craft since his previous album drop in 2020 with “HARDLY EVER SOBER”. The album was an all-around treat with guest appearances from Compton royalty A.D. and Azjah, as well as Hi-Tone, K.Y., Trizz, Rucci, Audio King, Steelz, BeatBoy, Dnyc3, Contraband, Nabeyin, and YeloHill. Hardly Ever Sober was a project packed with intuitive flows and well-structured lyricism where he displays the hit-making ability he built and expanded during his absence and aided him in revamping himself as a fully independent artist. The well-celebated release pandered to Major’s carefree flow and autotuned melodic raps.

With recent success outside the music industry and with his infamous cannabis brand SWIRLZ Worldwide, joining Los Angeles’ G. Perico on tour alongside Inglewood standout Rucci, Chief Major has been doing everything but kicking his feet up. Preserving his noticeably ongoing momentum, the rapper is gearing up to drop his long-awaited album under his new stage name by the close of 2022.  The project’s official name has not been promoted or announced though fans should look out for new music towards the close of the year and at the break of 2023.

Listen to “Kick My Feet Up” below.