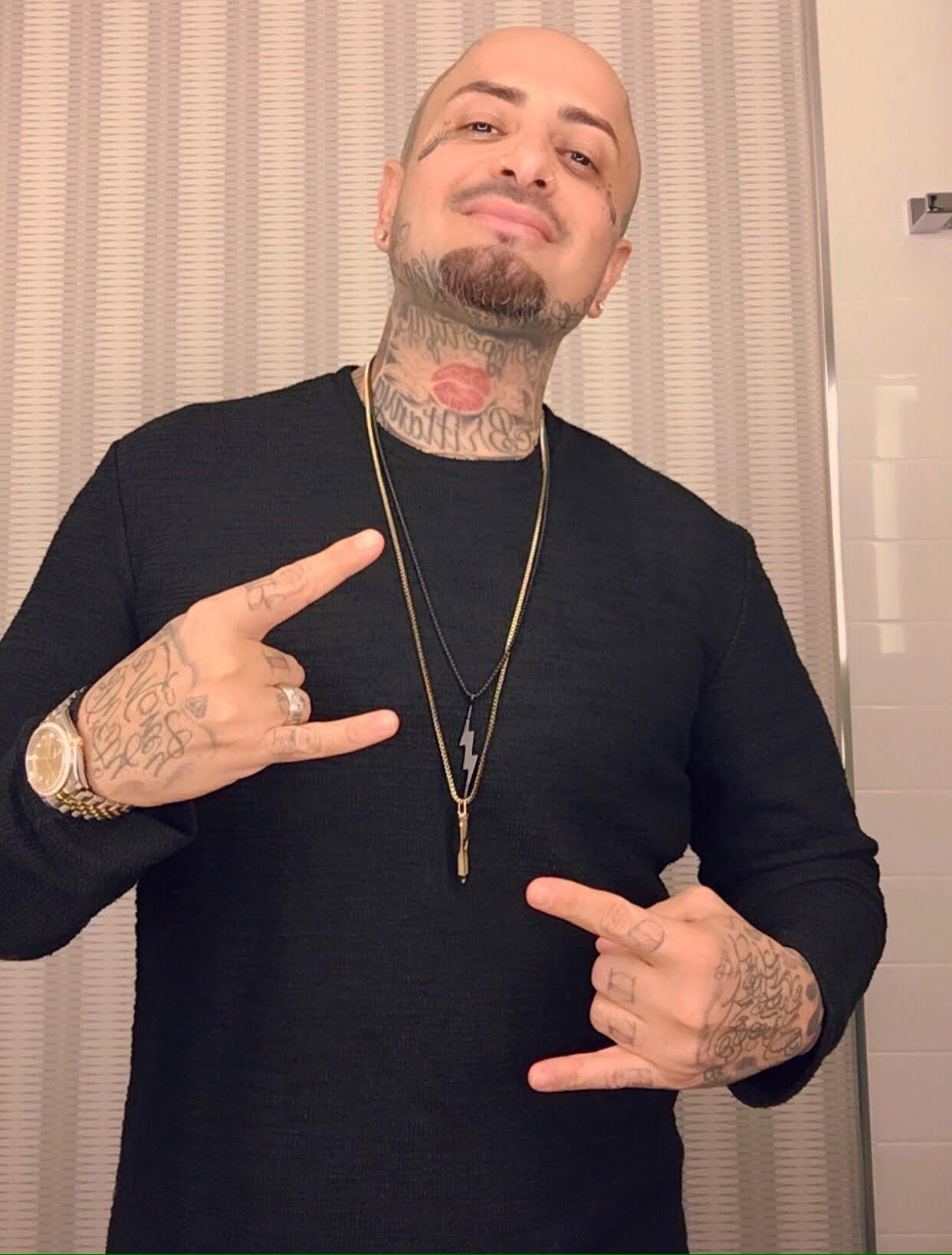 Marcello Razavi, better known as Lucky Razavi, started with a background in fashion design. Having the previous experience of owning and operating seven different brands that have all been sold worldwide since 1996, he currently runs a company that specializes in social media management and content creations.

Marcello graduated out of high school in 1993. Right out of the gate, he set up shop and opened a clothing brand called Chochie Casuals which specialized in rockabilly apparel. Regardless of his early success, he still attended college and got a degree as a backup, incase the fashion world wasn’t his ideal industry.

Over the years, Marcello started a variety of other brands such as Spanish Harlem Industries, 187 INC Clothing, Meow Gang and Avenue Streetwear. Deciding to retire from the fashion world, and taking a break from the corporate world 2014, Razavi started DG Media & Entertainment Group just four years later. To date, his company handles an array of different digital media aspects. These range from brand awareness, all the way to social media growth. DG Media & Entertainment Group also manages celebrities to help them with the digital world, outside of what they do already in the real world pertaining to their celebrity status.

During his senior year of high school, Marcello attended a house party and ended up kissing a girl who was his best friend. The following day, his best friend officially stated the two were a couple. Macello responded, “DUI Baby”. She looked confused and he re-explained, “Dating Under the Influence”. Immediately, this excuse went viral around his campus, even though the term ‘viral’ didn’t really exist since it was pre social media.

As the local exposure of his quote continued to grow, Marcello capitalized on the hype and immediately began printing tee shirts and hats. He started to distribute these items to all the highschools in his district, with no shortage of consumers. At the age of just 17, Marcello realized his aptitude for fashion.

After high school, he attended post-secondary school while still creating clothing and selling it to friends and co-workers on the side. Marcello ended up designing a custom woman’s dress at the time- a new style that hadn’t been created previously -and got into a large woman’s chain store called Clothes Time and Contempo. “It was ironic being in college and having two full-time jobs as a waiter, while on the other hand my clothing brand was in one of the biggest chain stores in America. I don’t like getting comfortable and always make sure that I have plan B, plan C and plan D as backup in any business direction I plan to take,” says Marcello.

Starting in the fashion industry, Marcello had to fight for his spot to become a success. He gives the following advice when beginning; “You need to believe in yourself. It sounds cliche, but you need to understand some people make it overnight and others might take 10 years before they start seeing their dreams come true. Be open to take criticism, and at the same time not to allow anyone to shatter your dreams. I remember I would go to clothing stores to get my brand into them and some buyers were so rude. They would say ‘don’t quit school’, and ‘fashion stuff isn’t for you’. I surely proved them all wrong in time,” Marcello explains. Another important factor that led to his success was to be and stay humble. There was no shortage of that when he worked two full time jobs as a waiter. He always made sure his first job paid for both his clothing companies overhead and the other college classes he attended.

Mindset is also very important to this serial entrepreneur. Patience, believing in your service or product, and not focusing on the money are some core pillars of Marcello’s accomplishments. “Start a business to satisfy your dream job. I always say make a hobby your job. Then, when you work it doesn’t feel like work and more as happiness. And don’t forget to believe in yourself either! Being a CEO isn’t an easy journey. If it was, everyone in the world would be one,” Marcello says.

Having the experience of running a multitude of businesses, Marcello reflects on how to scale a business effectively. Find the business field you want to join and make sure it’s something you are passionate about. Always have at least two streams of income coming in, one to cover your lifestyle and bills, and the second to fund your new found business.

Studying your field of business and researching your competitors is also important, as it gives you an idea on what errors they’ve made in the past and an idea on how to not repeat them again on your own company. Always spend your money wisely, make sure you are not in debt, because when you’re in debt you might make or take higher risks, which stunts your growth.

In the fashion world, there are many competitors. Marcello entered it truthfully and honestly, only creating clothing that he would wear personally and or what he would find a woman attractive wearing, never bothering with trends or styles that he didn’t find interesting.

In the social media world that Marcello currently works in, he only works with celebrities who encourage a strong work ethic. “Brittanya is a prime example of that, as she never does anything she doesn’t believe in, and when she agrees to join a project or create content it’s always with full passion. I actually look up to her a lot, she truly has the mind of a hustler and feels that at times we had 48 hours in a day versus 24 because she loves to work so much,” says Marcello.

The majority of entrepreneurs run into many challenges when running a business, and Marcello is no exception to that statistic. His worst loss was losing millions back when websites were popular. Marcello had refused to make any e-commerce website, due to focusing so hard on not stepping on retailers toes.

Always having a massive following even since the MySpace day, he would always send traffic to realtors worldwide to get his 187 Inc merch. With the creation and popularity of Instagram, Marcello finally bounced back from this mistake, and made a website. “It exploded with sales that blew my mind. We would have random 50% off Instagram sales and gross $80,000+ sales on a weekend. So that was my biggest failure coming to the party late with an e-commerce store. I’ve always had that nitch of connecting with my followers for my clothing brands, always playing the middleman and sending them to retailers instead,” says Marcello. Keeping up to date with trends and always looking for something new is important to not only the success of a business, but also the long-term survival.

With these explosive numbers, Instagram changed Marcello’s life. “I started noticing how close of a connection I was building with my followers for my clothing brand,” says Marcello, “Then I realized- why don’t we just create a company that specializes in all fields of social media instead. From management, to content creation, to branding of people, services, and products”. And that led to the creation of DG Media & Entertainment Group.

Fully utilizing the power of social media, he’s currently in the process of creating a podcast, opening up a vegan restaurant and bakery, and lastly, making a vegan clothing brand. “It’s 2020; The future is vegan,” explains Marcello with a laugh.

Legacy is something that Marcello plans to leave behind with his journey. Not only as a business mogul, but also as a loving father and companion. He also intends to break the societal ‘norm’ of people’s first-glance judgements. “I’m referring to the old saying, ‘don’t judge a book by its cover’,”  says Marcello. “I understand the way I look and I know people will judge me for that. ‘All authors are responsible for his/her own book cover’. I want to live by example versus just being all talk. So far I feel like I’ve been doing a great job.”

If there’s anything to learn from Marcello’s story, it’s to understand that owning and maintaining your own business isn’t easy. “You have employees- now family members -that depend on you. I say family members is because your employees are also a major part of your success and you need to take care of them. Having your own business is very stressful, you need to be mentally prepared to sacrifice holidays and other fun things until your business is fully functioning,” says Marcello. “Lastly, in my early years of having my business I would fantasize about working for someone and just coming into work and going out. Going home and being present in the moment. Unfortunately when you are self made that isn’t the case. You think of work 24/7, even in your dreams. So be ready to fully get yourself involved in whatever career path you decide to take and just get started.”

Related Topics:BusinessFashionmarketingSocial Media
Up Next