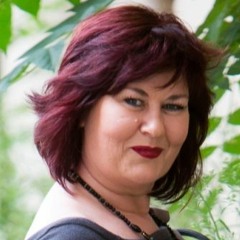 Anet Janik was born into the GDR, before the Berlin Wall was pulled down. Growing up in socialism, with surveillance and a constant reminder to put the collective before the individual. Never being encouraged to be unique, to advance herself, or to reach for the stars. She was merely encouraged to do her work, keep her head down, and not rock the boat.

Anet shared that her single mother did what she could for her family. “With a socialist, atheist upbringing, I never imagined that there was a spiritual power to this world that could help all of us break-free. I was never taught that taking risks was what was needed to change my situation – I thought I had to play it safe.”

That’s why she shared that she went to learn to be a typist at the end of the 1980s: it was the safe and responsible thing to do. Then, everything changed when the Berlin Wall fell in 1989. Although unemployed, she felt she had the ability to foray into entrepreneurism more than ever before. “But I was still playing it safe – well into 2010s, when something told me to take a risk with cryptocurrency.” She had never listened to her intuition up until that point in her life, which is why she was an unhappy person. Not living to her truths and allowing her soul to dictate what she did every day.

Listening to My Intuition

When cryptocurrency arrived on the scene over five-years ago, it intrigued Anet. “Something told me to invest money into it, even though it was highly volatile. Most people didn’t know what crypto was and had no interest in learning. I took a risk and in 2016, I invested money into Bitcoin.”

The value of Bitcoin continued to grow and grow some more. “I was working an $8.50/hour job at the time that I felt I could finally quit, while diving deep into crypto networking. In 2017, my Bitcoin value had grown so much that I felt I had the experience to promote a new crypto marketing technology company. It was the best decision of my life.” This unique company now gives hundreds of thousand people around the world the opportunity to take part of the worldwide economic market connected with the fiat-currency.

“I had achieved true financial independence, and emigrated out of Germany, finally able to take control of my destiny. By 2019, I had founded Die Kryptopreneurin, a coaching service for lucrative crypto cash flow that includes coaching.”

It Starts with Your Mindset

Today Anet shares she is officially a crypto millionaire who has been able to change her life in every aspect. But more than being an expert in the art of picking coins and investing in them, she is a mindset and spiritual advocate, intent on showing as many people as possible that no matter where they come from, they can achieve the freedom that she has obtained with cryptocurrency.

Once she allowed her deepest desires to come to fruition and started to work towards fulfilling what she wanted in her life, total abundance washed over everything she does. Although she was raised atheist, she realized there is a spirituality at play here on planet earth, and she want other people to know that there is financial freedom waiting for them, too.

The age of crypto has forced this awareness in the most beautiful way possible. We all are honored to be part of the journey and encourage everyone to join together as a collective for the ride.

Your Passion Leads You to Success, Proves, Jack Careedy