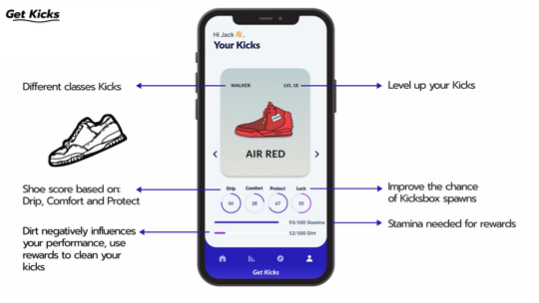 With the sudden proliferation of the digital era, sneakerheads have become more significant than ever. Instead of being a subculture, it has become a lifestyle. Sneakerheads are breaking the bank by spending thousands and thousands of dollars on getting their hands on various exclusive sneakers that they want. As a result, companies, and brands compete to migrate this community to virtual spaces. This is done by creating new and more exclusive sneakers that this community salivates over to get their hands on. But one of the most crucial aspects in this industry that sometimes is overlooked is the community.

GetKicks is the first application dedicated to bringing sneakerheads together. It’s a platform where they can discuss and talk about their favorite shoes in a safe, secure, and friendly environment. By joining GetKicks, you will be able to have fun playing games, earn tokens and upgrade your profile as well.

In this era of Web 3.0, people must be given opportunities to play their games while they are still able to enjoy the benefits of their hobbies. GetKicks is doing this by allowing sneakerheads to earn tokens while interacting with other sneakerheads and enjoy their favorite brands by playing games.

Players can play solo or club mode. Another feature that GetKicks allows players is the ability to challenge others individually using PvP mode. Through PvP Mode, players can stake tokens on their winnings for each game that either party creates. So it is a way for people in getting Kicks to earn a little something if they win a bet against another player.

Another feature that GetKicks takes pride in presenting is the Marathon tournament, where people can compete to climb up the leader board. This will be a place where members can fight for Kicks and Tokens against other players in the community. They will also be able to form teams and compete against other teams to win rewards like KickBoxes, Accessories, and more.

The most exciting part of this project is the NFT. GetKicks is striving to create an excellent platform for its token holders and the entire sneakerhead community. The NFT will be used to enhance the game itself. GetKicks plans to integrate the NFT into its platform so that players can be rewarded for their loyalty and contribution to the game itself. In addition, players can upgrade their kicks and add accessories to help improve the stats of their kicks. This is a feature that is unheard of because it will enhance not only the playing experience of players but also the efficiency and ease of gameplay for the players themselves.

Rising Entrepreneur and Marketing Guru Chastity Heyward and Her Mission