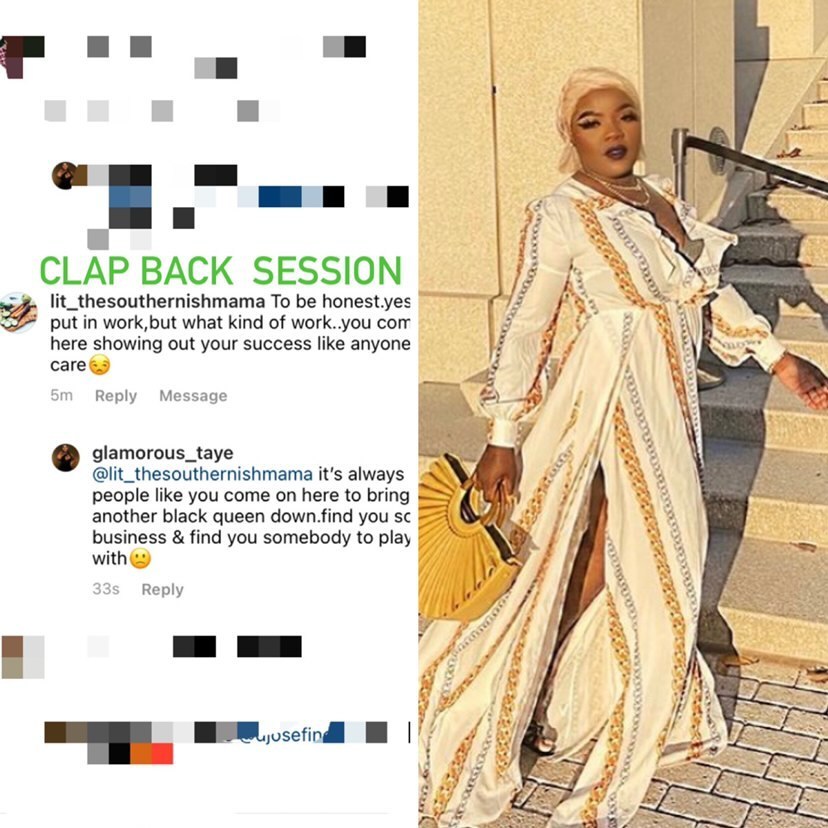 Criticisms, crazy fans, and hate comments are a part of life for a person who embraces growth and success. You are bound to face people who are ready to put you down and when it comes to being influential, the chances of that happening just blows up. We have seen many fans who get disappointed with their idols and start spreading hatred under their social media accounts to influence other people to follow the same. Idols keep quiet and let them make the noise but sometimes, they give them back what they are asking for!

The tale of a crazy Glamorous Taye fan:

Glamorous Taye is a person who has experienced all of this first hand. The concept of being black and being a social stigma to segregate people is something Glamorous Taye wants to break. Every post of Glamorous Taye focuses on making sure that her fans understand that being black or of any other race is as same being a white person. She feels that one of the top reasons for her to become an influencer is to make people understand that it is never ok to put down a person because of their skin or the race that they belong to.

The reply that made the difference:

Glamorous Taye has been gathering fans ever since she started out and sometimes her fans can get quite crazy. Recently Taye had experienced a clash with one of her fans. The comment of the fan was derogating the way Glamorous Taye works and also directly mentioned that she wasn’t inspirational at all. But Glamorous Taye decided to give back a fitting reply that the fan will never forget in their life.

Glamorous Taye went onto point out the fact that it was those kinds of people who bring down people who want to do something with their lives just because they are black. She also added that she would find the fan a platform for them to vent out theiremotions so that they find peace.

Glamorous Taye is a woman of clarity in thought and that is the number one reason why she was able to build up a unique fashion influencer brand. Glamorous Taye says that sometimes you need to stand up for yourself when someone tries to bring you down. She also adds that it is not arrogance rather it is courage and confidence in oneself and gives a clear indication that they are someone who cannot be played around with. This clash with a fan has made one thing clear, Glamorous Taye loves her fans and at the same time wants her fans to learn what is right and wrong. She believes that when more than 1000’s looks up to you as an inspiration, high standards must become a part of you.

Future of the Glamorous Taye Brand:

Glamorous Taye is all set to release her two e-books followed by a pop-up show event on April 17th. Taye also is pretty upfront with updating her fans about her plans and lifestyle to get them inspired. You can find the influencer on Instagram as Instagram: @glamorous_taye,Tik-Tok: @glameduptaye, YouTube: glamorous taye, and Website: www.glamoroustaye.com

Glamorous Taye also has her very own Luxury Furs and Beauty boutique, which is set to release by the year-end. With all these plans in place, Taye is soon to reach the millionaire mark and pave way for more inspiration for all of her fans.

Meet Yetsi: The Young Musician Who Brings Together A Fusion Of Latin Pop, R&B And Reggaeton Rhythms