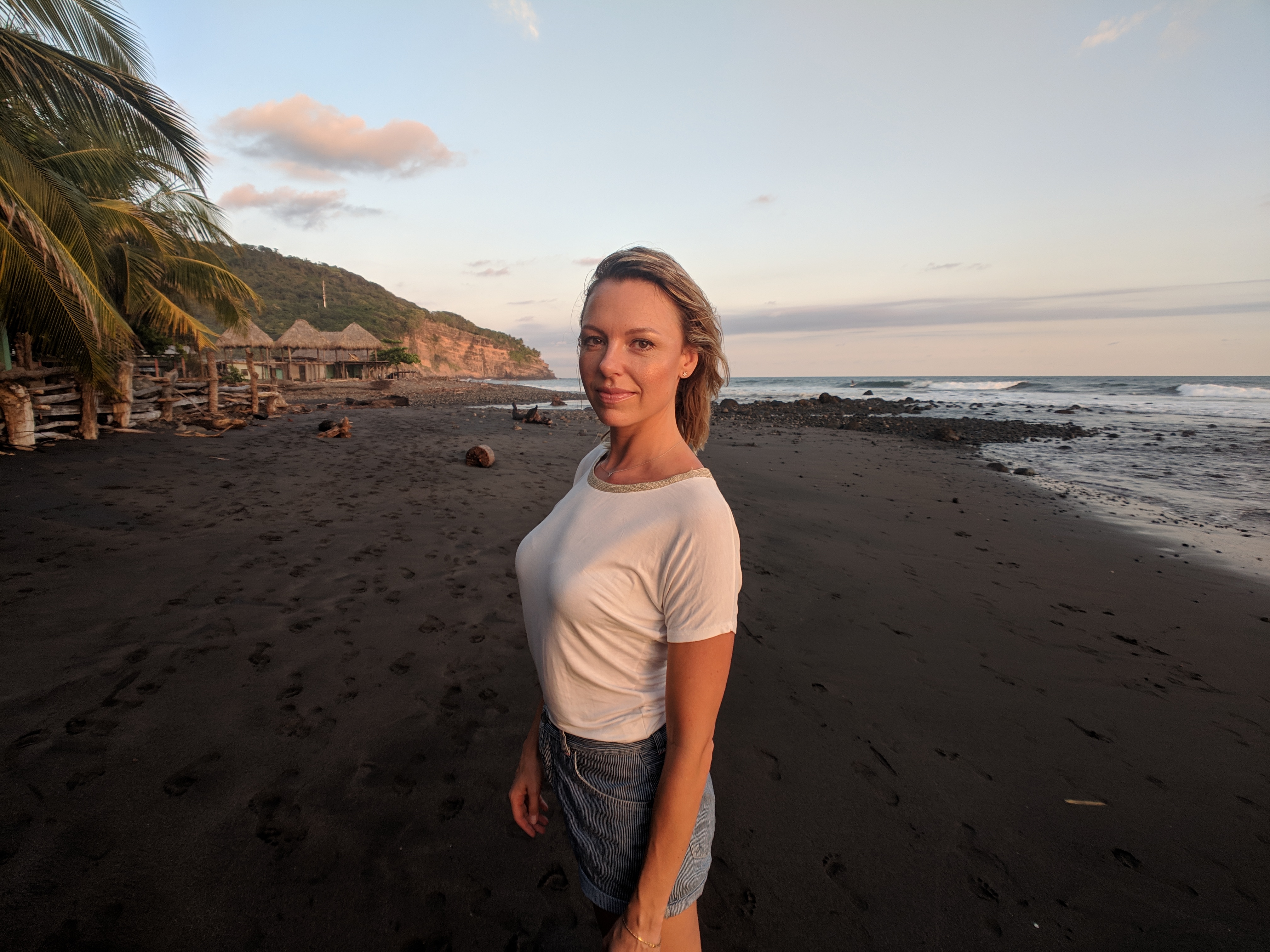 These experts are disrupting leadership and challenging the status quo to build a business and life with deep integrity and an awakened soul.

Amidst a world scrambling for control, these 4 rising heart-centered entrepreneurs, are shattering traditional paradigms of leadership, that have kept women out of their bodies and disconnected from their intuition.

On the new frontier, learning and leaning on one another is at the core of Feminine Leadership. The new standard paves the way for women to move beyond competing with one another, and to support each other instead.

LIFE IS CYCLIC, OWN IT!

Meet Emellita Da Silva. Her radiance exudes the magnetism of an embodied woman.

Showing up with discernment, and with her body as her guide, Emellita leads her clients to finding hidden self expression and lovingly heal past trauma.

Recently, she stepped back from a huge business commitment while navigating the end of a personal long term relationship. Amidst the turmoil, she was pulled to embrace the natural cycle of death and re-birth, as the catalyst to deep transformation.

Through her embodiment work, Emellita is able to help other women find their way back to trusting themselves again.

She found a brave new way to lead through exploring the truth in herself and trusting the cyclic nature of being a woman in leadership.

‘I feel like I am constantly breaking free of who I once was. A part of this has been a massive acceptance of the process. I am not available to be stuck in suffering anymore. I have experienced many leadership styles and methodologies, but through self exploration I realised these were not aligned with my values. I’ve embraced my own style, on my own terms, with what feels good to me, while letting go of the restraints of past beliefs!’

Glennon Doyle, says ‘You are a goddam Cheetah!’

This is the essence of feminine Leadership, where women are coming home to themselves and their tribe. They are confidently letting themselves out of the cage within which they were once held captive!

Freeing yourself is not without pain. It requires a shedding that involves letting people, places and things go.

Stepping into Leadership requires honesty, vulnerability and above all else, truth. Truth about who we are, what we want, why we want it and the greater impact it will have on every human we touch with our voice.

Shannon Santangelo is just one of those cheetahs, letting herself run freely again.

‘When at the end of my life, I can close my eyes, knowing I lived and led with goodness. Constantly checking in on what am I doing, how does it feel and how is it impacting people’

After losing thousands of dollars, weeks of shedding and the most difficult time in her entrepreneurial journey to date, Shannon walked away from something that had initially given her wings.

What she realised, was that her voice had become someone else’s. With her power outsourced, her self-leadership had faulted.

But when her inner voice spoke, she listened.

The moment she walked away and moved through her shame, she rose with a newfound fervour to lead. Shannon is now driving a movement of conscious women, unafraid of questioning the status quo, and rediscovering themselves in the process.

ON DOING LIFE, BEYOND THE CAGE

Shannon Rose is simply doing life differently. Having packed up their little family, while 5 months pregnant with their 2nd child, Shannon and her husband bought a one way ticket to Europe.

Their decision caused an eruption of disapproval from family and friends, questioning their ‘lack of a plan’.

In the 5 years abroad, Shannon not only found herself, but discovered that the truth to living the sweet life, lay in doing so on her own terms.

A decade of coaching Strength & Conditioning, coupled with the skills she acquired through building a 6 figure Brick’n’Mortar business in Australia with her Husband,  culminated in the creation of a Heart-led Life & Business Coaching Practice, that generated over $330k in its first 2 years!

Two of the fundamental pillars of Feminine Leadership she says, is ‘the ability to slow down and trust the pace with which life is leading you.

‘By learning to stop forcing your way through life, you’ll discover the difference between thinking with your mind, and feeling with your intuition. It can feel unsafe, especially for those who have been hustling and following the rigid strategy of the outdated paradigms of traditional leadership. It’s a recurrent theme that I’ve heard time and time again from my mentors.

Being a Leader can be a lonely road, we think and speak differently and that can trigger others. That is why consciously curating your circle of support, and having good mentors can mean the difference between staying in the gap of the conversation or swaying back into what is comfortable and safe. No Leader ever prevailed from playing it safe.

ON THE ART OF DETACHMENT

Angelica Pascone is a Medium, a new Mom and multi-dimensional healer.

She recently moved through a challenging experience within a mentoring group she had invested in. Her saving grace throughout the experience, was her ability to stay rooted in her values of Feminine Leadership: “always lead with your heart. Even when things get messy, even when things don’t seem logical, move anyway.”

Practicing fierce emotional detachment, allowed her to initiate the hard conversations required for her continued growth, both personally and professionally.

”When we are in a space of being led, we can lose connection to our inner authority, and this is something that we can no longer do as Women in Leadership roles.”

Angelica is striving to change the conversation in the Online Coaching Industry to amplify all voices and call forward a deeper integrity. By opening up a safe space for female coaches to be heard, she’s disrupting the widely accepted mentality of ‘following the leader’

It is time to detach from the fear of rocking the boat, and to start dancing on the boat!

BRINGING IT ALL TOGETHER

Her new mission is to help young teens move away from the toxic algorithms stopping them from making real connections.

“Feminine Leadership is not what we have learnt from patriarchy, but about embracing the parts of us that more often than not, we have pushed down.

When we own those parts, we can connect with others on a deeper more transformative level.”

Her journey has taken her from hosting Wellness Retreats, to the world of TechStars and high-rolling investors. It’s a change that has demanded a new level of confidence, grounded in integrity and certainty in her own identity.

The transformation has allowed her to bring a new level of wisdom to the world of Feminine Leadership.

From going it alone and operating from the constructs of the patriarchy, to self trust, honesty and moving forward toward impact and a consciously curated Community, Heart-Centered Leadership is taking front and centre for a good reason.

According to Brené Brown, Leadership is having “The courage to be vulnerable is not about winning or losing, it’s about the courage to show up when you can’t predict or control the outcome.”

These women are doing exactly that.

In a world of sin, rescuing the values ​​of couples and families is a disruptive mission for Karinna Berrospi

Shannon Rose is a Freelance Journalist, Copywriter and Holistic Life Coach. Shannon has been featured in and writes for many global publications via her personal columns - please do pitch me on any of the below topics. Her work can be viewed in USA Today, Forbes, INC, Entrepreneur, Elephant Journal, MamaM!A, HER Forward, Disrupt and INSPIRE UK Magazine, USA Today, Influencive, Brainz Magazine, GRIT Daily, Disrupt, Splash, Vocal Media and Hollywood Digest . Shannon covers online business, unplugging from toxic hyper-masculinity and 'boss-mom' culture, holistic health and wellness, relationships I am particularly interested in marriage and parenting. I enjoy covering Leadership, Tech, Social and Wealth trends. Join her Community over on Telegram and tune in to her Podcast which trends in the Top 100 in Italy on iTunes, RICH Conversations to experience her potent words, energy and wisdom.