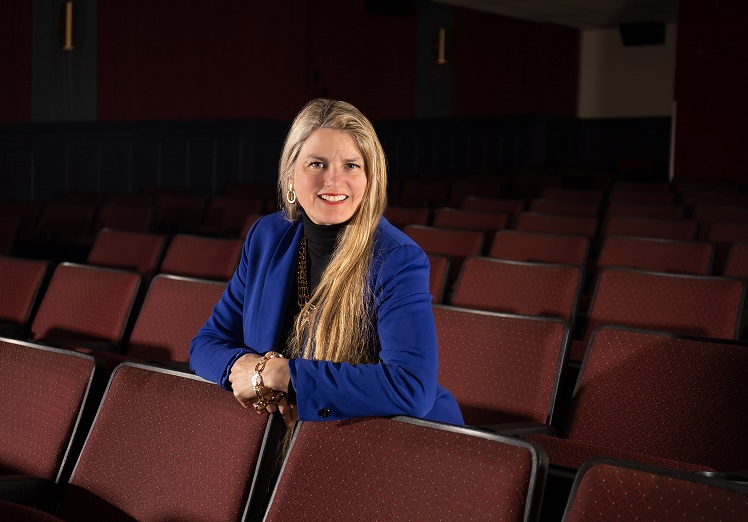 Bonnie Comley is a three-time Tony Award-winning and Olivier Award-winning theater producer. In 2015, she founded BroadwayHD, a streaming platform for theater fans. The mission of BroadwayHD was to make Broadway shows accessible to people who couldn’t get to the theater. Filmed or videotaped theater has previously had a controversial past, considered by many as disruptive to the traditional Broadway business model of ticket-buying patrons filling the theater seats in a brick and mortar building. But the value of steaming theater into homes was never more apparent than in the pandemic, and this practice is now being incorporated into many productions going forward.

In March 2020, Broadway, a multi-billion-dollar industry hailed as the pinnacle of live entertainment, was shut down overnight, leaving 100,000 workers unemployed and collateral damage that will continue for years to come. BroadwayHD’s motto is “If you can’t get to Broadway, get to BroadwayHD,” but who could have predicted that the entire world would be unable to get to the theater? BroadwayHD’s deep catalog of over 300 full-length pre-recorded shows and robust social media helped to create a global online community of theater fans.

The BroadwayHD platform provides streaming content for subscribers and social engagement forums to support the live theater industry. Watching digital versions of stage plays and musicals encourages audiences to buy tickets to live stage productions. The best way to learn about theater is to see as much as possible, and BroadwayHD’s on-demand lineup of high-quality stage productions combined with the convenience of streaming is ensuring the next generation of theater fans.

Through BroadwayHD, Bonnie has been instrumental in the evolution of the stage to digital movement. BroadwayHD’s catalog of pre-COVID-19 recordings will be the inspiration on the path back to recovery for the industry. The streaming service has made theater accessible to the masses, expanding the reach of theater to those who cannot experience it or those who want to keep experiencing it over and over again.

It’s an honor to speak with you today. Why don’t you give us some details about you and your story? How did you get to where you are today?

My theater, TV, and tech background has put me at the intersection of Broadway and technology. I am the founder and CEO of BroadwayHD, a streaming platform for theater fans. BroadwayHD is serving full-length Broadway productions to a global online audience and keeping them connected through social media platforms to share favorite shows, songs, up-and-coming actors, playwrights; all the things that expand an art-form’s fan base.

I’m sure your success has not come easily. What challenges have you had to overcome along the way?

I am the CEO and Founder of BroadwayHD, a media technology company. Yet, less than 25% of media-tech companies have female CEOs, and there are even fewer female founders, so I find time to mentor the next generation of female tech entrepreneurs. At BroadwayHD, Comley has ensured that the company has a 50:50 gender split. Safeguarding her gender-diverse workforce at BroadwayHD allows the company to serve an increasingly diverse customer base.

Through my many years of experience, I have gained a deep knowledge of the technology and expertise in marketing and producing filmed Broadway shows, a specialized content.

Let’s talk about the work you do. What do you specialize in, and why should someone work with you over the competition?

As a three-time Tony Award-winning Broadway and an Olivier Award-winning West End theater producer for the live stage shows, I was able to successfully negotiate agreements for BroadwayHD with all 17 unions, guilds, and associations responsible for the live streaming and filmed TV capture of Broadway’s unionized shows. Together with my BroadwayHD team, we have also been able to develop crucial relationships with leading theater companies across the world to showcase their productions, including Roundabout Theater Company, The Public Theater, Manhattan Theater Company, The Geffen Playhouse, Lincoln Center for the Performing Arts, Broadway Worldwide’s Direct From Broadway® catalog, BBC Worldwide North America, WNET/New York, the Royal Shakespeare Company, Royal Ballet, Royal Opera House, Donmar Warehouse, and Digital Theatre + in the UK, as well as partnerships with leading independent producers.

Through these unique partnerships, BroadwayHD has provided these global theater organizations with a platform to showcase their productions. As a result, BroadwayHD features a vast library of theatrical content, including some of the past 20 years’ best works spanning numerous genres and eras. The BroadwayHD platform aims not to replace live performances but to utilize these vital relationships and agreements to use their new media form, stream, promote, and expand the reach of live theater productions, ultimately preserving it for the next generation well inspiring future theatergoers.

In a ground-breaking first for the Broadway industry, on June 30, 2016, the BroadwayHD team, in partnership with the Roundabout Theater Company, achieved the Guinness World Record for the first Broadway show to be live-streamed. The historical performance of She Loves Me was viewed live in real-time by audiences in over 84 countries across the world. On that day, BroadwayHD and She Loves Me were trending on both Facebook and Twitter, while media and customer testimonials praised and lauded the live-streamed production.

What’s your best piece of advice for readers who desire to find success in their life?

Success in your life is harder to define than success in your career. Career success is measured with financial metrics or by degrees, honors or awards achieved. Career success is the outer part of your life that others will judge with job title, salary level, and the lifestyle it affords you. Life success is more fluid and tied to feeling fulfilled and having a purpose. Life success is your desire to go to work. If you make lots of money, have a great office and position in your company, but you can’t wait until 5 pm, it will feel empty. Follow your interests and know that no job has to be forever. Changing careers doesn’t have the same stigma it once had. If you enjoy getting up and going to work, you are a success.

What’s next for you?

I dream of a theater-going culture in the United States. I want families to treat Broadway like they treat the sports. I want families to watch the Tony Awards, which is the Broadway version of the Tony Awards. I want families to know the actors like they do in Hollywood movies. Communities with solid arts institutions have more excellent success rates in schools; students are more likely to achieve higher literacy levels, score better in math, and are more likely to volunteer, graduate and vote. Cities with strong arts programs find residents more likely to contribute to community cohesion, reduce social exclusion and isolation, and make communities feel safer. But no one is coming to bail out the arts because of all the social good and because art makes them feel all the feels. According to the latest data from the National Endowment for the Arts and the Bureau of Economic Analysis, they will come to the rescue because the arts and culture sector added over 800 billion dollars to the National GDP in 2016 (Click here for the full report from NEA). The contribution of the arts has instrumental and intrinsic value, AND it can and has been quantified in dollars. And if you can’t get to the theater, start by watching digital versions of Broadway shows online. We have over 350 shows at www.BroadwayHD.com

Bilal Junaid does not come from luxury but has created an empire that is inspiring the youth.