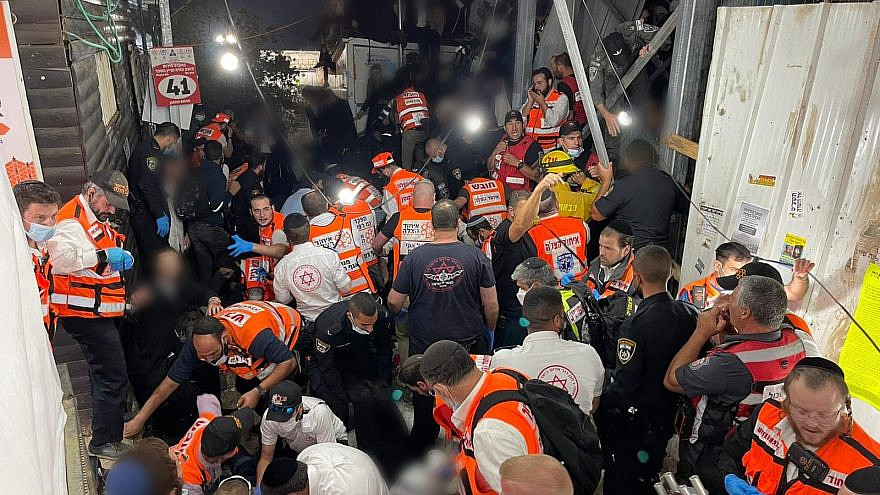 JERUSALEM – On Friday, Israel experienced one of the country’s deadliest civilian disasters to date, after a stampede at a religious festival killed at least 45 people and injured about 150. The stampede began near the bonfire of the Toldot Aharon hassidic sect, based in Jerusalem.

As reported by The Jewish Journal, victims were crushed under streaming crowds as emergency workers struggled to reach the scene.

Today’s festival was celebrating Lag Ba’Omer, a Jewish religious holiday which attracts tens of thousands of people to come out and honor Rabbi Shimon Bar Yochai, a 2nd century sage and mystic who is believed to be buried in Mount Meron, located in northern Israel. Traditional activities include playing with bows and arrows, bonfires, parades, and other joyous events.

The festival attracted a crowd of about 100,000 people, according to media reports, including tens of thousands of ultra-Orthodox Jews, when large numbers of people “thronged”, as described by The Jerusalem Post, a narrow tunnel-like passage during the event. Witnesses who took video footage said that people began falling on top of each other near the end of the walkway, as they descended slippery metal stairs.

Disrupt Magazine obtained and watched video footage, which depicted large numbers of people, most of whom were black-clad ultra-Orthodox men, squeezing into this tunnel.

The Lag Ba’Omer festival served as the first mass religious gathering which was to be held legally since Israel lifted nearly all its COVID-19 restrictions. The country has seen a large decrease in cases since launching one of the world’s most successful vaccination COVID-19 campaigns late last year.

“This was one of the worst disasters that has befallen the state of Israel,” Netanyahu said. The Prime Minister had briefly visited Mount Meron around midday Friday, offering condolences to the families of those lives who were suddenly taken by the horrific tragedy.

U.S. President Joe Biden said he had already spoken with Israel Prime Minister Benjamin Netanyahu on Friday to offer his condolences. “The loss of life among worshipers practicing their faith is heartbreaking,” President Biden said. “I have instructed my team to offer our assistance to the government and people of Israel as they respond to the disaster and care for the wounded.”

United Hatzalah CEO Eli Pollack said that the stampede occurred when large crowds of people streamed into a closed-in complex, leading to dozens of people being crushed against fences. While all the physically injured people have since been evacuated from the scene, many people requiring psychological aid, including medical volunteers, are still at the scene and are receiving help.

Vice President of Operation Dov Maisel speaks about the tragic incident at Meron and the work of the UH team there. pic.twitter.com/Xk7PesL6zS

According to the Israeli Health Ministry, with at least 45 people killed, four people remain in critical condition. In a race against the clock, a number of funerals were expected to be held before sundown Friday, the start of the Jewish Sabbath when burials do not traditionally take place.

“We just finished treating one of Israel’s worst disasters. A terrible disaster of people who came to celebrate Lag B’Omer and were unfortunately crushed to death,” said United Hatzalah vice president of operations Dov Maisel.

In memory of the 45 people who lost their lives in the Har Meron disaster.
May their memories be a blessing.
יהי זכרם ברוך

“This was a very difficult site—sites that we have not seen here in Israel since the worst days of the terrorist wave back during the early 2000s,” he said, referring to a 2010 forest fire that struck the country.

[We] are fighting for the lives of dozens wounded, and will not give up until the last victim is evacuated,” a statement said by The Magen David Adom, Israel’s national emergency medical, disaster, ambulance and blood bank service. MDA means “Red Shield of David,”

The Justice Ministry said the police’s internal investigations department was launching a probe into the possible criminal misconduct by officers.

“Rabbi Shimon used to say that he could absolve the world… If he didn’t manage to cancel this edict on the very day of his exaltation, then we need to do real soul-searching,” one eyewitness told Channel 12 TV.

This is a developing news story, which will be updated as accurate, verified information is provided.

Fully Vaccinated? You Still Need to Wear Masks on Airplanes, According to Extended TSA Requirements

Know It First From Mohit Patel’s MP Media And PR Agency: The Answer To All Your Digital Marketing Needs

Andrew Rossow is the Legal Editor and Strategy Operations Advisor at Disrupt Magazine. He is a practicing attorney and the CEO and President of AR Media Consulting. He serves as a co-founder of The Guardian Project, alongside TV actor, Mark Pellegrino (13 Reasons Why, Supernatural, Lost, Dexter). Rossow has appeared regularly on CHEDDAR TV, ABC, FOX, CBS, and NBC affiliate networks throughout the U.S. He has been recognized by Entrepreneur and Fast Company for his journalistic integrity in helping build out and grow media outlets, formerly Grit Daily News.