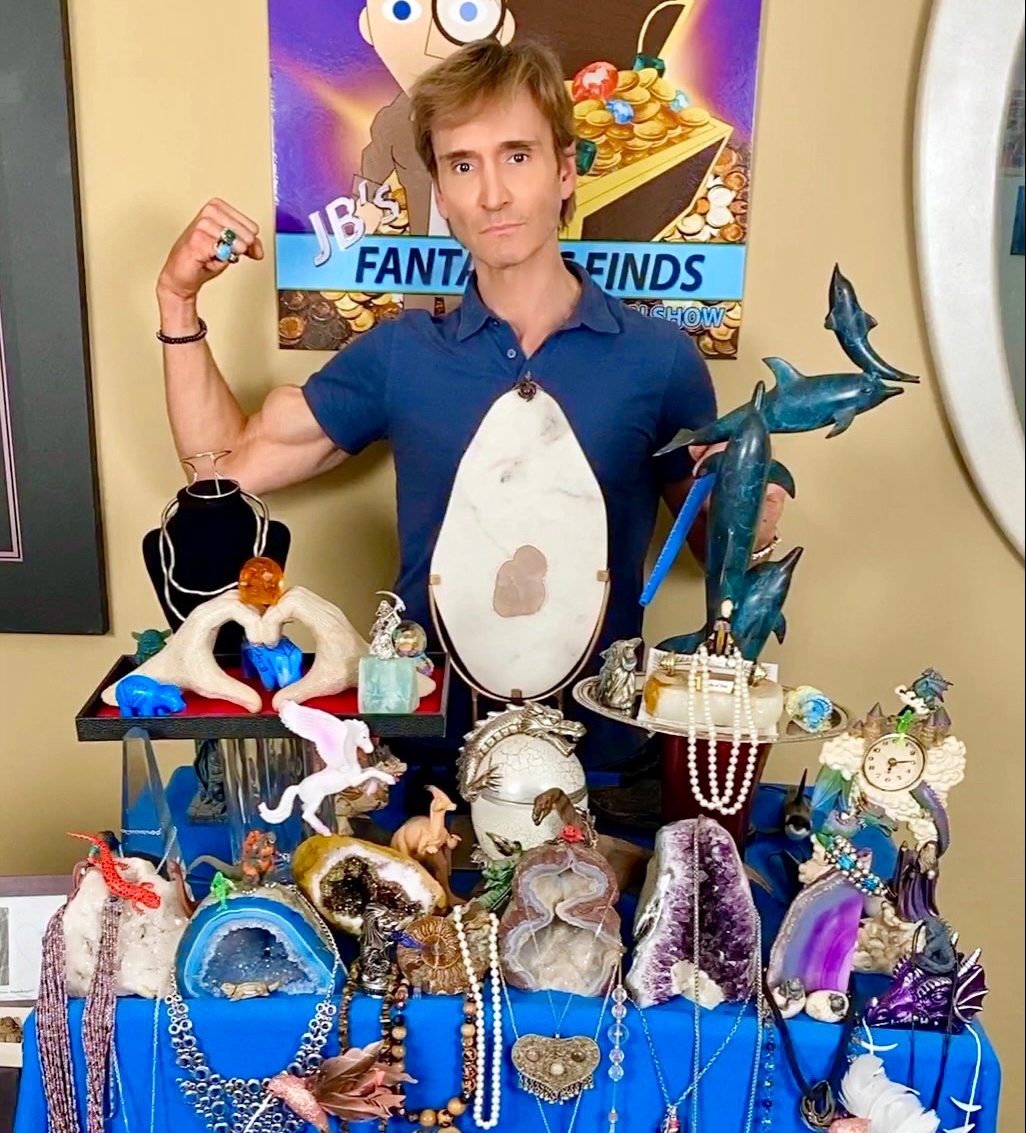 Since he first appeared on TV sets nationwide with Fitness Made Simple, John Basedow has gone on to show the world that when it comes to his success as an entrepreneur, the accomplishments are limitless.

Following his introduction to pop culture consciousness with Fitness Made Simple, Basedow created the entertainment series New Media Stew on YouTube, did hundreds of news reports for major platforms such as AOL, Hollywood Life and MSN, motivated the interweb with his Wake-Up Words videos, and appeared as a keynote speaker at various events.

His abundant accomplishments eventually led him to his latest endeavor, JB’s Fantastic Finds. JB’s Fantastic Finds is often described as a rare mix of talk show, stand-up comedy and home shopping that combines the worlds of myth and fantasy with tangible treasure. However, for many of its viewers, JBFF has become a life-changing experience that they show Basedow the utmost gratitude for bringing it into their lives.

While Basedow’s goals as an entrepreneur may seem somewhat dramatically diverse, even diametrically opposed, one consistent theme you may find with all of them is his perpetual emphasis on positivity and motivation that encourages others to achieve their goals and do what makes them happy.

As the famous entrepreneur, who the Urban Dictionary says ‘never aged past 23,’ always says: “If you believe in yourself, you can accomplish anything.” – John Basedow

JB’s Fantastic Finds showcases treasures from all over the world that viewers are given the opportunity to bid on. Show participants can find a wide range of jewelry items from vintage to contemporary, plus mystical statues, stones and crystals, with prices ranging from a few dollars to several hundred. JBFF Members appreciate that the show has something for everyone, whether they’re treasure hunting or just enjoying the experience. When questioned about what makes her so infatuated with the program, Fantastic Finds’ ‘Most Winning Star Of The Show,’ Gaye Koutrelakos, said the following:

“I’ve known John for three years and I was there in the beginning of JB’s Fantastic Finds when I’d just started out as a buyer, and I haven’t missed an episode since. The jewelry is all gorgeous, the pieces are amazing and the prices are affordable. But I think that what really makes the show stand out is John’s incredible ability to make all of the viewers feel so special. He will remember small details about every member like ring sizes, where they’re from and what kind of jewels they’ll like. Between John and the jewels, this show genuinely has EVERYTHING.”

Show watchers can’t stop raving about the destination ‘must see TV’ experience Basedow has created with JB’s Fantastic Finds. Basedow’s impeccable charisma, charm and knowledge, paired with a lighthearted environment where positivity and humor reign, make it far more than your typical auction. For many, it’s an educational experience where John frequently offers fun facts and ‘gem lore’ about pieces, leading show regulars to call him ‘Nat Geo John.’ JBFF Members see their fellow bidders as friends they can joke with, while many go as far as to call them family.

“The funny part about all of it is that it’s like we’re family but it’s actually an auction, and we can be bidding on the same thing and joking at the same time. There are never hard feelings. You can be upset you didn’t win but still happy because you adore the person that wins and feel happy for them. It’s a safe zone where you never feel judged, you can joke with others, and create real friendships on top of the beautiful artifacts. We’re a tight knit family that welcomes all members with the same kind embrace John has shown us,” said viewer Sonia Engle Murphy.

In order to tune into JB’s Fantastic Find’s, viewers must join a Facebook Group on which they can show off treasures won at the show and interact with other members as well as the handsome host. JB’s Fantastic Finds is broadcast every Tuesday and Saturday starting around 8:30 PM EST. Most viewers describe the show as the highlight of their week.

“I’ve met the most amazing friends from watching the show and I actually spend a lot of my free time talking to them as well. John is an exceptional human who knows how to create a fun environment where everyone can interact and have good time, plus he’s easy on the eyes! Overall it’s just brought so much good into my life. I’ve come to love it so much that when my friends ask me to go out on Saturday night, I’ll go out of my way to switch it to a Friday so I don’t miss an episode of JB. They know the drill by now.” said viewer Janice Marek.

From its humble beginnings at a mere 400 members in August 2021, JB’s Fantastic Finds has grown exponentially to a rapidly increasing number of 25,000 members. With all the success and impact he’s already made with JB’s Fantastic Finds, Basedow has once more proven his unprecedented pioneering ability to succeed with concepts outside the typical norm.

“Your first career success shouldn’t define the rest of your life. Don’t ever let other folk pigeonhole you or limit your future opportunities and goals. Think outside the box, choose your own path, work hard and make magic happen.” said Basedow.

John made quite the unconventional move when he chose to promote JB’s Fantastic Finds, a new media online show, via traditional media. “TV has always been my passion and it did everything for Fitness Made Simple. I saw potential in the new television landscape opening a similar door for JBFF,” Basedow stated. The JB’s Fantastic Finds TV commercial features multiple actual JBFF Show winners highlighting their baubles with an ‘I found my treasure’ theme and has infectious catchphrases, like ‘Sold Sold Sold,’ being uttered both on the show and in the streets. This bold method of marketing not only brought John his largest increase in viewers, but it opened doors for innovation in Facebook Media for both viewers and creators. Fellow Facebook entrepreneur Andrea Lee, who also boasts she’s never missed an episode of JBFF since she started watching over a year ago, expressed how John’s trailblazer ideas have never ceased to impress her.

“He’s the only one that came up with TV commercials as a form of marketing for a show that wasn’t aired on TV. When they aired, the show really exploded after that. His innovation brought Facebook Auctions to a new level of exposure. Most people didn’t really know about them before and the Facebook world has John to thank for that. John’s knowledge has always been impeccable, and that is apparent on the show as well. He possesses such great knowledge that he is able to make objects like jewelry come to life, always expanding fun facts about their powers and metaphysical properties.” – Andrea Lee

Despite there being a vast amount of similar shows that others could choose to watch, members of JB’s Fantastic Finds are certain they need look no further than the show they have already fallen in love with.

“There are a lot of shows on Facebook, but I choose John’s because as a host, he is simply irreplaceable. It doesn’t hurt that he’s easy on the eyes! JBFF is truly like therapy. It can turn a bad day around and make you forget it even happened as soon as you tune in and hear John’s welcoming and delightful voice. You get the shopping, the laughs, the friendships and the fun. I have yet to come across another show that could bring me what JBFF has, and I highly doubt that I ever will,” said Sonia Engle Murphy.

To become a member of JB’s Fantastic Finds, CLICK HERE to request to join the JBFF Family.