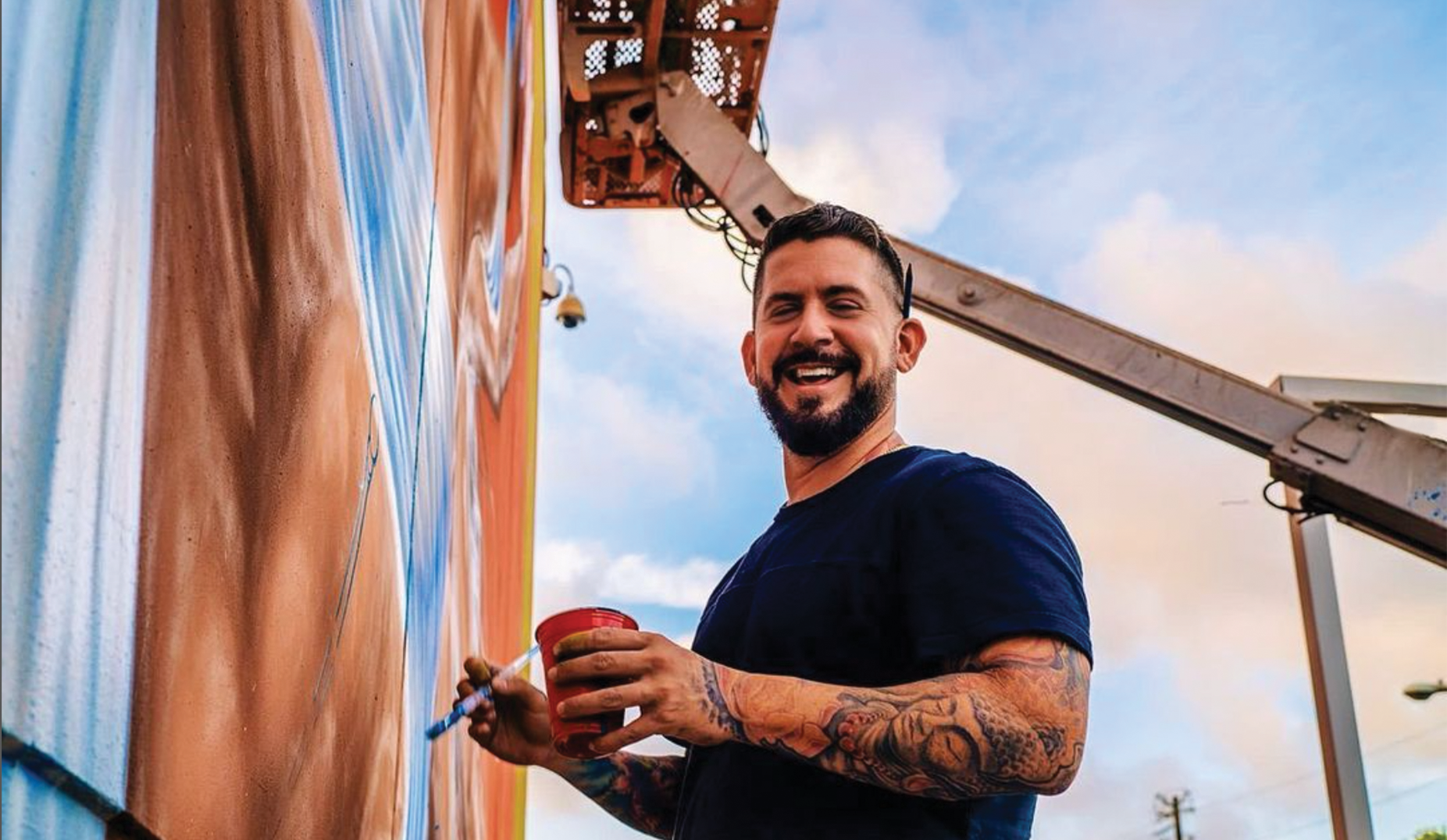 The NFT space is still in its infancy. While there is a lot of hype and money flowing through the cryptocurrency market, especially in the NFT space, there are still many untapped possibilities. NFTs aren’t as popular as they could have been because of the lack of inclusion in the metaverse. We still don’t see many Latinos in the NFT space.

One of the leaders in disrupting the NFT space and opening doors for Latinos to join the community is Juan Salgado, a highly sought-after tattoo artist. He started the Tattoo Skullz Society recently, and it’s already creating ripples in the space. Let’s take a look at his journey and how his life as an artist became a beacon of hope for his fellow Puerto Rican artists.

Juan’s Journey as an Artist

Juan has always been an artist since he could use reason. A shy kid from a humble background, art has become his way of coping in the real world. It was both his escape and his passion. When he realized he had the talent, he decided to learn and get better at it.

He decided that art was what he want to do for a living.

Juan went on to study art in college. During the process, he started diving deeper into painting and immersed himself in the art scene.

His transition into becoming a tattoo artist began with his love for punk rock and metal in high school. Since he had an interest in art, seeing his idols covered in ink got him interested in tattoos.

Back then, it was hard to enter the tattoo industry, and you can’t buy the equipment unless you work for a tattoo shop. Licensed tattoo artists back then didn’t give away opportunities for aspiring tattoo artists that easily.

Juan didn’t let that hinder him. In order to learn how to tattoo, he started by getting one. He learned by watching the artist as he got his first tattoo. He befriended the local artists and asked them questions.

He had the opportunity to do his first ink work when he was in his 20s. His friend had the equipment, and his other metalhead friends wanted free tattoos. Juan saw this as an opportunity to practice the craft. He built a small studio at his home and started building his portfolio.

When word started getting out about his work, Juan was offered a full-time job in a shop in Bayamón.

He started from scratch, doing his first 15-piece portfolio for free, and worked his way up.

Eight months into tattooing, he received his first award, and since then, he’s earned more than 150 international awards.

Juan decided to travel to compete. At the first convention he went to, he was denied a booth because you need to be famous to get in. One of his friends working in a shop in New York was invited, and he got in through that friend. At that convention, he won two awards: the Best Tattoo of the Convention, and one for Large Color.

These two awards had the biggest prestige, and Juan was in magazines after that.

“It made me feel like I’ve proven myself that I’m good enough to beat the best from the US and other countries,” Juan says. “I think it was also a good lesson [for Puerto Ricans], that it really doesn’t matter where you come from. What matters is the hunger you have.”

Don’t be a Starving Artist

That hunger to prove himself, plus a bit of business savviness, has led to Juan’s success. But in reality, not all artists have a flair for business the way Juan has. He gives advice on how to transform one’s creativity and talents into business for the “starving artists” out there.

“Being good [at your craft] is just like 10% of it. You also need to build good relations with the scene you want to get into,” he says. “You need to provide value, and you need to climb the ladder. It doesn’t pay if you’re good, but nobody knows about you.”

Juan Salgado emphasizes the importance of marketing yourself. He uses social media to get his work and his story out there. When he was starting, he saw how hard it was, as a Latino, to get into different platforms. That’s why he built his client base and made a platform of his own.

Right now he has over a quarter-million followers on Instagram, Facebook, and Twitter. Before the age of social media, he also hustled his way into newspapers and tattoo magazines. His hard work paid off when he got published in the top three tattoo magazines in the world at the same time.

“First get great on your craft, then work on your marketing. Don’t promote a product that’s not ready. And compete. You need street cred. How can you say you are the best if you haven’t competed with the best and beat them?” Juan says.

Juan Salgado also worked recently on a campaign for Bad Bunny’s album release. He got the idea when he saw on Instagram that Bunny and his crew got a tattoo of their album cover.

They pitched the idea of giving free tattoos of the album art to 150 people, and Bad Bunny endorsed their idea.

It was a bit of a crunch-time project, but they managed to pull it off. Bad Bunny did the same thing in Miami, and that’s 300 free tattoos to market the album.

“The ripple effect was so big, I have friends that are teachers in school and they told me students are doing the tattoo with markers in school,” Juan shares.

That is “real” influence, and it was Juan that planted the seed and watched it grow.

Juan Salgado shares how he got introduced to NFTs. He was by no means a cryptocurrency trader. But, some of his clients in the tattoo shop are expert traders in cryptocurrency. During the long hours of tattooing, they would tell him about the market, and it piqued his interest, especially when they introduced him to the concept of NFTs.

“It blew my mind that a lot of people are paying a lot of money for these animations or jpegs. I started learning about the blockchain and all of that,” Juan says.

He wanted to make a big collection, but it is still a far-away dream. One needs a big team to pull that off.

Juan started with a one of one work. He was the creative director and he hired an animation company to make the animation for his art concept. The project cost him around $7,000 but he was happy with the output.

“It was super nerve-wracking when I put it for sale. I made it an auction that ran for five days,” Juan shares.

In the last 45 minutes of the auction, a video game company bought his NFT for 7.5 eths.

“I knew I had a lot of weight on my back because a lot of NFT projects are waiting for me to have success so they can enter the market as well. So, for me, it was a celebration when I sold it,” Juan shares.

Juan gave some hope to artists on the island. It’s bigger than just selling his NFT. It was like the first hopeful project in Puerto Rico [in the NFT market].

Paving the way for Latinos to join the NFT space

His first one-of-one NFT was more than just a $7,000-dollar investment that gave a $32,000 ROI. It was proof that successful NFTs can be launched from the island.

One of the local controversies regarding the NFT space is a lot of ex-pats trading cryptocurrency move to the island for its tax incentives. There is a lot of animosity from locals who think their opportunities are being taken by foreigners.

When asked what his feelings are on the issue, Juan admits it is a gray area.

He wishes there is more collaboration, but since NFT is a new concept, there’s still a lot of division. Juan hopes he is helping bridge that divide.

In his opinion, the forums need to be fixed, so that more avenues to collaborate and more incentives for the local artists of the island can be the norm. There are still a lot of NFT forums out there with no Latino artists.

“If we don’t fix the forum problem, NFTs are not gonna be a popular concept. We need to all work together and make the concept work, so we can create an economy out of it,” Juan says.

That’s why Juan put his name on the line for his NFT project Tattoo Skullz Society. He wants more people to see credible NFT projects so that they can understand the value of this concept.

Another recent controversy regarding NFT is the lack of representation and cultural appropriation. Some women, blacks, and Latinos feel alienated in the current NFT space. That is why Juan believes forums should all work together to bridge that gap and push for more inclusion and proper representation in NFT.

Tattoo Skullz is a collection of 5,000 unique NFTs, and owning one is a membership to the community.

He created this project with “creating an artist community” in mind. Each NFT is at 0.08 eth, and all who purchased become founders of the community. They get access to utilities such as tickets for raffles and giveaways, VIP sessions, tattoos, and original artworks from Juan Salgado. They also enjoy a 15% discount for tattoo bookings in Juan’s shop which has a 2-year waitlist normally.

In the future, they are gearing up for in-real-life events, and founders get VIP access to these events, parties, art exhibits, and sessions.

Juan also plans to collaborate with other projects and make hybrid utilities.

What “Disrupt” Means for Juan Salgado

“Disrupt” for Juan Salgado is to interrupt old mindsets and create new waves that can open doors for new opportunities and pave the way for Latino artists to join the NFT space.

Or you can visit his studio, Color Conspiracy Tattoo Gallery.

Josh Dobson – Looking Forward to Reaching for More in the Future

Peter Salib is a Tech Columnist at Disrupt, Grit Daily, and many more notable publications. Based in New Jersey, he is an avid participant of events nationwide who's attended CES in Las Vegas consecutively since 2013. Peter is the host and producer of Show & Tell, a product showcase YouTube channel in partnership with Bold TV. Peter also works at Gadget Flow, a leading product discovery platform reaching 31M consumers every month. Peter frequently works with web3 and consumer product startups on media, content writing, events, and sales. His dog, Scruffy, was a guest product model on the Today Show with Kathy Lee & Hoda in 2018 and was dubbed "Scruffy the Wonder Dog.”