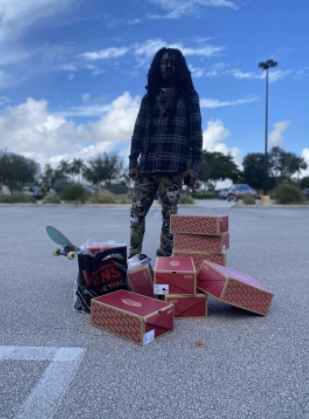 Hip Hop artist Kaboom Holy was born Antarrios Flythe in North Carolina. He realized his dream of becoming a successful artist after he started down a different path that didn’t include music in the mix. After overcoming consistent trails and errors, he has gotten to a place where he can pass down some knowledge to aspiring artists and entrepreneurs.

Kaboom has always had a creative mind. He wanted to be a graphic novelist and professional skateboarder for many years. But sometimes after you assess your options you realize that your passion is somewhere you haven’t explored. This is what happened to Kaboom Holy. As soon as his friend introduced him to music production, he was amazed by the process. Not only did he like it, but he was great at it. He practices on perfecting his craft and eventually monetizing it.

“After being introduced to music, I started producing and selling beats” he stated.

By the age of fifteen, Holy Kaboom invested in himself. He produced his first original song “No Man’s Land” which he also uploaded into his youtube channel. However, his life took a complete 360 between the ages of 17-24.

“I found myself arrested for violent crimes that resulted in a federal indictment. This started my battle with mental illness, which caused me to straighten up my act for good ” he said.

Dealing with mental illness is an intense battle that means something different to each person. So much so that it put his back against the wall, to the point where he had two options. He could either keep going down the same, unbeneficial path he was on, or he could better himself.  From then on, his focus was on improving his behavior, maintaining a healthy life, and a trouble-free future. This decision has treated him well, as Holy is now a multi-faceted artist and entrepreneur that owns multiple businesses with a strong social media influence.

Now, Holy has maintained a successful run in his music career and since has launched a record label in 2018 called, “XXVI-CMX The Label” which means “Twenty-Six-Nine-Ten” in roman numeral format. The label is known for its gritty, high-energy music and content. XXVI-CMX The label’s roster consists of Holy and label-mate, Money 2x. Records such as  “Bullet Holes and O’s” and “Smack Em” have hit a solid 100k+ views. Getting a start with early mixtapes like “Indastreets Ready”, Holy and Money 2X have made an impact in the Eastern Carolina region and have also earned fans in the United Kingdom respectively.

For more information on Kaboom Holy, visit his Instagram.

Related Topics:Kaboom Holy
Up Next

The Multi-Talented Ahsan Shoishob Is One of the Most Versatile Digital Marketers, Musicians, and Entrepreneurs in Bangladesh