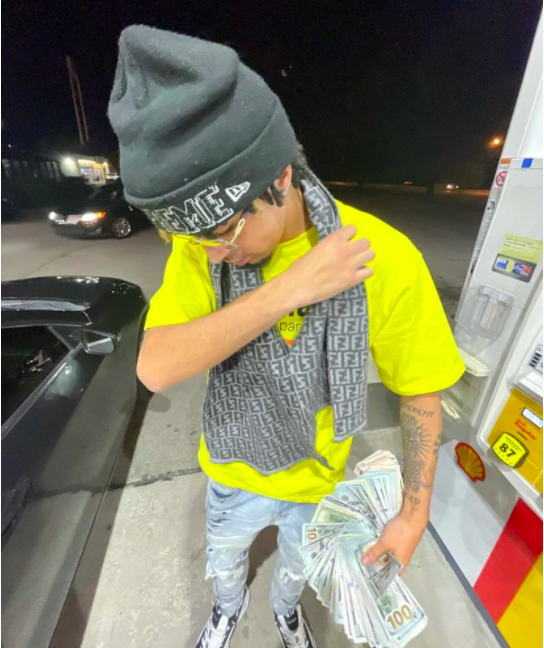 Punchmade Dev is one of the biggest rap phenomenon’s coming out of Kentucky this past year. With viral hits and thousands of views, the young musician has hits in the stash. Check out our interview with the rapper below!

Being from Kentucky, what was the household like growing up? Who were you bumping as a child up until your teenage years?

I come from a single mom household. Growing up I always got most of what I wanted: shoes, clothes, video game consoles, anything. Seeing my momma take care of me and all my brothers is why I hustle so hard today. She made things happen when failing wasn’t an option, no excuses. I keep that same mindset today. When I was younger I listened to legends like 2Pac, Biggie, and Lil Wayne. In middle school, my favorite artists were Chief Keef, Soulja Boy, and the whole Chiraq music scene as a whole.

When did you realize music could be a career?

I always had a love for music and dreamed about being a rapper but thought it was impossible. I remember making my first song on my phone using apple headphones and garage band. After coming across Lil Mouse’s music videos seeing the moves he was making a 13 inspired me to become a rapper myself. From there me and my friend Baby Jraco started making diss tracks about other kids that went to our school and posted them on Soundcloud. I wasn’t taking it seriously at the time.

Eventually, I quit and took my talents to youtube. Within only my first year on Youtube, I gained over 100,000 subscribers posting gaming videos. Around 2017 I started losing interest in video games as I got older knowing that I didn’t want to do youtube much longer. I always thought that becoming a successful rapper was too difficult until I saw YBN Nahmir blow up with his song Rubbin Off The Paint. Seeing him to come from a gaming background made me realize that the music industry has changed. It’s now easier than ever with the help of the internet. From that day on I completely quit Youtube and started to pursue music. From the start, I was able to buy my own studio equipment with the help of Youtube. I wrote my first ever 3 songs until I tried freestyling for the first time. I work way more efficiently punching in bar for bar and have been recording this way my entire career.

You put out a good bit of music just in the past year. How long does it take you to write a song and where do you get inspiration from?

Any song I ever put out was engineered by me. I produce the majority of my songs  because I like to have full control over my sound. If I had to describe my music in one word I wouldn’t have an answer for you.

How would you define the music you make? What makes it distinctive?

I choose to rap about my accomplishments and the wins I take. Hopefully listening to my music motivates you. The background I come from is what makes my music distinctive.

Do you know in your head what songs are going to hit? Are you strategic with this?

Every song I put out is a good song to my ears or I would have never released it. There’s no secret strategy to what I do. I produce, record, direct and edit my music videos then put them out.

How do you pick your collabs? I know you don’t mess with just any rapper.

As of right now, I don’t charge for features. I’ll only put a feature on somebody’s song if I genuinely like the music and fw whoever’s song I’m hopping on. I don’t kick it with too many people so you won’t see me with too many features. In the future, I plan to make songs with my favorite artist.

Fashion and clothing are a big part of your image. How would you describe your drip?

Aside from music I love fashion. In school, I was always best dressed and picking out my outfit the day before. I wear whatever looks good to me designer brand or not it’s all about how you put it together. Starting my own clothing brand is definitely on my list of things to do.

Where do you see yourself going musically in 2021 and beyond? Any plans to drop a project soon?

I see myself ending off 2021 way better than how I started. For the past month, I’ve been taking the time out of my day to really work on bettering my sound. The music I have stashed in the vault is way better than what I have out now. I plan to drop my first album on October 16th, 14 songs.

From College Drop to Becoming the Youngest millionaire – Karan Gadhvi