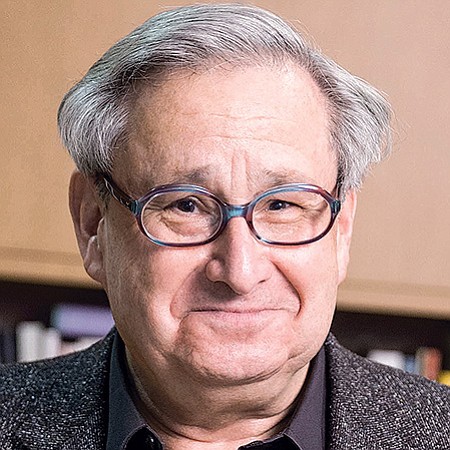 Yes, Joern Jacob Rohwer, a German writer known for his profiles of prominent cultural figures, has written a book about me entitled Steven D Lavine—Failure is What It’s All About—a life dedicated to leadership in the arts. The occasion is my stepping down in 2017 after 29 years as president of the California Institute of the Arts (CalArts), one of the most influential colleges of the arts in the world. The book goes back as far as my grandparents who immigrated from Eastern Europe to explain the shaping of my values, which led to a passionate commitment to equal opportunity and to CalArts becoming one of the most ethnically diverse art centers in the United States.

M.R.: It’s clear from the book that you come from humble beginnings, and you’ve been able to live the American Dream, but you said the door on that dream is closing or closed to others. Can you explain that?

I have been very fortunate. My grandfather delivered grain from a horse-drawn cart. His five children helped one another make their way in the world until my father was able to go to medical school. My father, in turn, made it possible for me to go to Stanford and Harvard and eventually become a university professor, then a foundation officer, and finally the President of CalArts.

My father’s generation had opportunities in significant measure because of the many governmental programs Roosevelt put in place to defeat the Depression, and I benefited from the rebuilt economy and the expansion of higher education. At least since Reagan and the subsequent Republican presidents, the federal government has backed away from investing in its citizens, reduced taxes on the wealthy, undermined the unions that used to help guarantee decent wages, and mostly ignored the impoverishment of far too many Americans. None of the earlier social programs did away with the need of individuals to work hard to make their way in the world, but they did help expand opportunity. I hope and believe that under President Biden that sense of opportunity will be restored.

M.R.: What tips would you give to an artist who wants to be successful now?

First, don’t wait for opportunity but create it for yourself. For example, we urge the acting students at CalArts to not just wait in line for someone to cast them in a play or movie, but instead to create a show themselves and then invite people who might help them.

Second, very few artists make it alone. You need to help others and they need to help you. For example, young visual artists today don’t just wait for a gallery to pick them up and promote their art. They create exhibitions of friends they admire in whatever space is available, often their own apartments. They help one another. In my experience, generosity is almost always rewarded.

Third, keep your eyes open. Look around; think about who might share the concerns that drive your art; where might what you care about fit in the world. Then seek out those people and places.

Fourth, relatively few artists today are able to completely support themselves through their artmaking. Artists need to know that the energies, skills and imagination that lead them to create something unique are equally the skills, energies and fresh thinking that other areas of work require. Think about how to describe your abilities in terms that people outside the arts can understand so that they can appreciate the range of what you are able to contribute.

Finally, most important is persistence. Often things won’t work out as you intended. You need to learn to live with failure and learn from it and persist. That’s what the title of the book Steven D. Lavine—Failure Is What It’s All About refers to.

M.R.: You are a specialist in cultivating relationships and staying in touch with people, a skill you honed being CalArts’s president for twenty-nine years. Can you give readers some tips on how to hone that skill?

The key thing is to pay attention to what other people care about and where your interests might genuinely overlap with theirs. Take the time to let yourself care about what others want and need. Then stay in touch with people. Don’t just be in contact when you need something. Behave as you would with other friends, sending congratulations, pointing them toward things that might interest them. Understand that relationships take time and are not likely to develop if you act cynically, just trying to sell them on what you need. But do find ways to tell them; don’t make them guess.

Who Is Bando Beej?