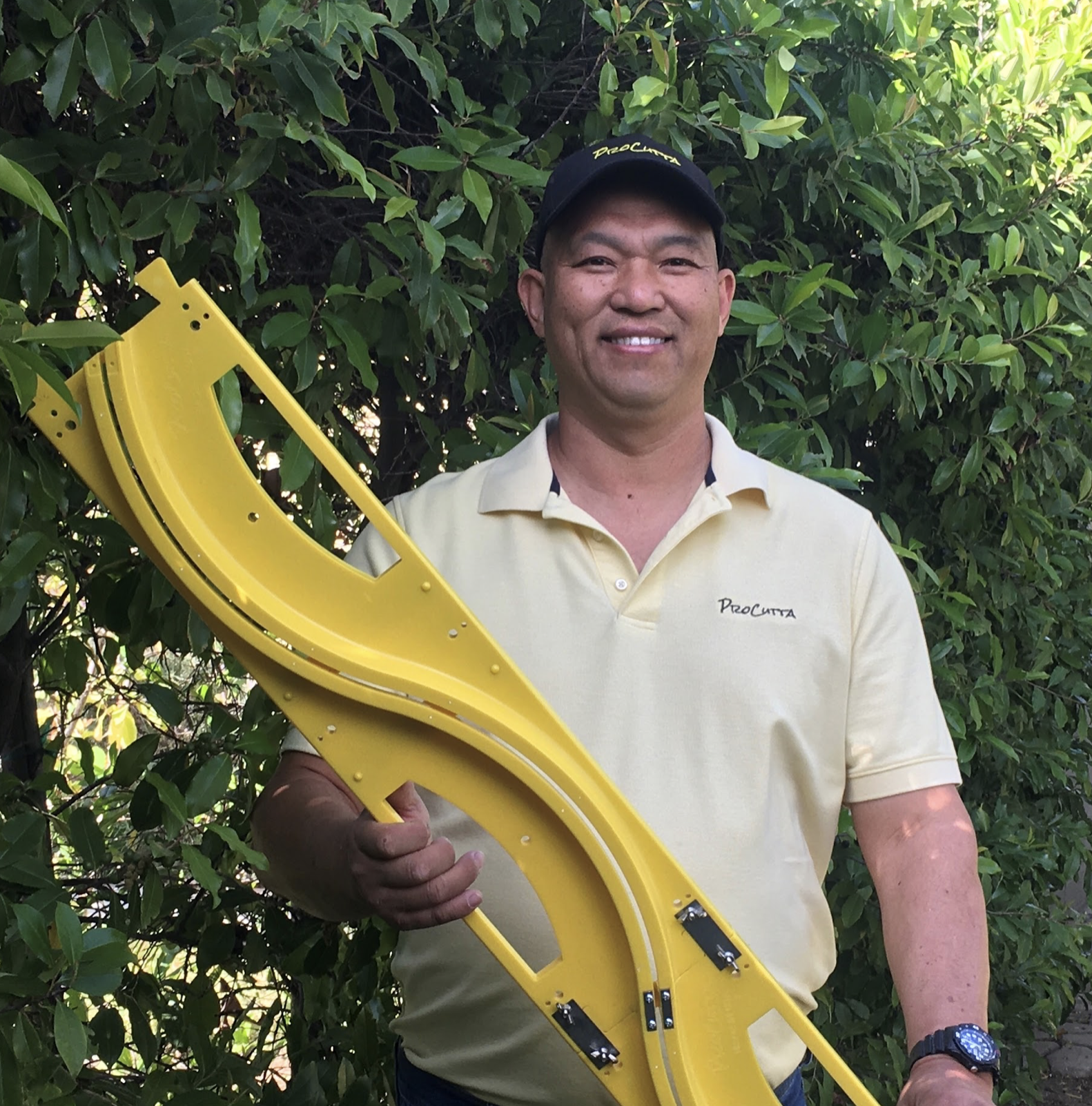 Sam Lee is a landscaper contractor who specializes in artificial turf installation. Synthetic grass has grown wildly popular over the years as homeowners have started turning away from natural grass in favor of a more practical and eco-friendly alternative.

Hi Sam. Tell us what led you to think there was a problem in the fast-growing turf industry.

The problem is that installing artificial turf is no simple job. It requires painstaking effort as you need to be physically in shape to be able to prep the yard and to bend, lift, pull, and cut the artificial turf to fit along the edge of the yard. In the middle of large spaces where two rolls of turf must be placed side by side, it’s even harder. You have to flip the turf from the grass side to the backing side to cut the seam. It requires extensive measuring, tracing lines on the back of the turf, planning for the alignment of the two pieces, and finally cutting the material from the backside without steering the knife blade off alignment.

It’s not uncommon for a turf installation to take long hours and leave you with sore, calloused fingers at the end of the day. Moreover, a turf installer usually can’t turn down a job during the sweltering summer heat. This makes fatigue and exhaustion just a part of the job.

These issues combine to make turf installation a difficult and laborious job. On top of that, if you don’t cut the seams properly, they will be visible and become an eyesore. As a turf installer, your reputation is on the line with every job, and visible seams cut deeply into that reputation. For the inexperienced DIYer attempting to do it on their own, it’s hard not to end up with a mess and lots of time and money lost.

So, I hear you have a revolutionary new tool. Tell us how using the ProCutta is different from the traditional turf installation method.

Yes, it makes the process fast, safe, and simple for both turf installers and do-it-yourselfers. The big difference is that nobody cuts artificial turf from the top side. The conventional method is cutting artificial turf from the backside or backing material. At times this involves flipping the turf over and cutting and recutting to make sure that the turf pieces are cleanly separated. Despite the constant flipping of the turf and sawing of the material, the installer must make the cut as straight as possible, so that this piece of turf can be positioned next to another piece in a way that hides the seam. There are two inevitable problems with this method: 1) the slightest deviation from a straight cut creates a gap between the seams that can be an eyesore, and 2) even the straightest cut in combination with the perfect repositioning still creates a straight line that may look good but is still detectable.

Conversely, when synthetic grass is laid on top of the ProCutta knife guide channel, the grass blades are facing up, holding the turf edges down makes the blades open and raise upward so that each grass blade becomes singular and more easily navigated… enough so the knife blade can cut through without compromising the grass blade.

The ProCutta was designed with a gentle curve instead of a straight line. This makes it easier for the installer to place any two pieces together because the curved cuts are always the same. Not only does this eliminate unsightly straight seams by replacing them with harder to detect curves, but it also allows the installer to cut and seam at any angle or position.

That’s fantastic! Tell the origin story of the ProCutta.

I had a landscape company, and I was installing turf. We were doing straight seams at the time. I remember coming back from lunch on a job and noticed that all of the straight seams were visible. It had taken the guys about two hours to do, and I thought “Wow! This took a long time and now we’re going to have to fix it somehow!” I started looking at other ways people were doing seams and I ran

into a small group of guys doing ‘S’ seams by hand, cutting from the back side. I tried that and not only did it take forever – 30 minutes for a mere 6-foot seam – it was hard to match the pieces in the end. I thought there must be a faster, better way of doing this.

That night I was in bed thinking about how to do this and this quote from the Bible came to me, “If any of you lacks wisdom, you should ask God, who gives generously to all without finding fault, and it will be given you.” So I did… and He did! I started scribbling in a notebook and with excitement I showed my wife, Michele. She assessed the scribbles and blurted, “Like a cookie cutter!?!” I went out in the yard at 10:30 that night and started building the first prototype.

Incredible! …and so the journey begins. What happens next?

I called my friend Bob Walters, who has worked as a mechanical engineer for about 40 years. I told him about the idea and he said he would help make my two-dimensional drawing professional and useable. It was time to take the next step, or in this case, go to the next dimension.

Next, we needed a CAD drawer to transform the design into a three-dimensional manufacturer’s prototype. The only problem was that CAD drawers are very expensive and can charge up to $350 per hour. I didn’t have the funds for that and thought that this might be where the journey ends.

Bob said he would put a word out. It wasn’t long after that I got a call from a friend named Ricky I hadn’t spoken to in years. We start talking and catching up and I tell him about my invention. He offered help, and I declined, explaining that I needed something very specific. He pressed and it turned out he was more than capable to help, he was a CAD engineer! He created the original CAD drawing for ProCutta at a highly discounted rate with very generous payment terms.

It was always one day at a time, with revisions and hurdles along the way – but everything fell into place. Michele and I prayed a lot and knowing that there is no such thing a coincidence – God blessed us every step of the way. Michele also had the faith in me and ProCutta to agree to empty our retirement account and max-out our home equity to get this off the ground.

That’s phenomenal. Did you find the manufacturer next?

Yes. Again, I didn’t know where to go and couldn’t find anyone locally that was in our price range. But finally, I was talking with a friend, another contractor who lives up in Sacramento. I told him about what I was trying to do, and he told me he has a new brother-in-law, Brent, who was experienced with plastic mold injection. He turned out to be the person to make the very first ProCutta, with a 3D printer. While this gave us a useable product, producing this way was infinitely cost prohibitive. We needed to have a custom mold built – talk about expensive! So I hit another wall.

Initially the only companies I could find within our budget that made large molds were out in Chicago. The project was becoming very expensive when you factor in the logistics and the freight. Friends encouraged me to manufacture it in China. But ProCutta had to be made in the USA – I felt strongly about keeping jobs in America.

At this point, I was feeling the urge to throw in the towel. But the very next day I got a new lead to help build the mold locally! I was ecstatic. There were many details left, but I had the breakthrough I needed. I still spent another year testing samples over and over, but to make a long story short, I had my solution for the mold. Again, no coincidence here – all credit goes to God.

With a lot of time spent researching I found a top-notch plastic injection mold company that specializes in aerospace. I felt blessed that they would do business with a small start-up. Their machines are top-of- the-line. They helped make the ProCutta perfectly, without a single blemish. After all it took to get here, ProCutta is a fantastic product made in America.

Can you share some of the consumer reactions to the ProCutta?

At first, I started hitting up all of the local guys here in Los Angeles that were getting into the artificial turf industry, there are so many stories about jobs that went wrong and guys doing terrible seams.

Another guy I spoke to worked at a turf distributing company and he would always hear complaints about bad seams.

So I started doing demonstrations of the product. And I would do the most ridiculous seams! Like the diagonal seams. No one had heard of a diagonal seam! I was doing cuts at crazy angles. People were blown away!

I still remember back when I was stressing out the day before a job with big seams. I used to spend hours planning out where I was going to put the seams. I’d try to avoid areas directly in front of a doorway or window or anywhere that the seam could become an eyesore if it didn’t come out right.

ProCutta builds confidence and you can sleep at night without worrying about where to put seams… because with the ProCutta the undetectable seams can be placed anywhere! I still spend hours planning seams, but now it’s not because I’m fearful, it’s just because of my perfectionist habits.

The industry is very tight-knit, and word started to spread. My guys gave the ProCutta the nickname, “The Secret Weapon.” Now every time we go do a turf job, they ask…

“Hey Sam, did you bring the Secret Weapon?” “Of course, I bring it every single time!” Thank you, Sam! This has been wonderful.

ProCutta’s precision you can easily piece remnants together to create an undetectable multi-directional seam. Less in the landfill and more in your pocket. Get creative, the possibilities are endless.

Harbor Classic Is the Disruptor Outdoor Furniture Has Been Waiting For

The Slings and Arrows of Classical Education: An Interview with Dr. Jonathan Kenigson