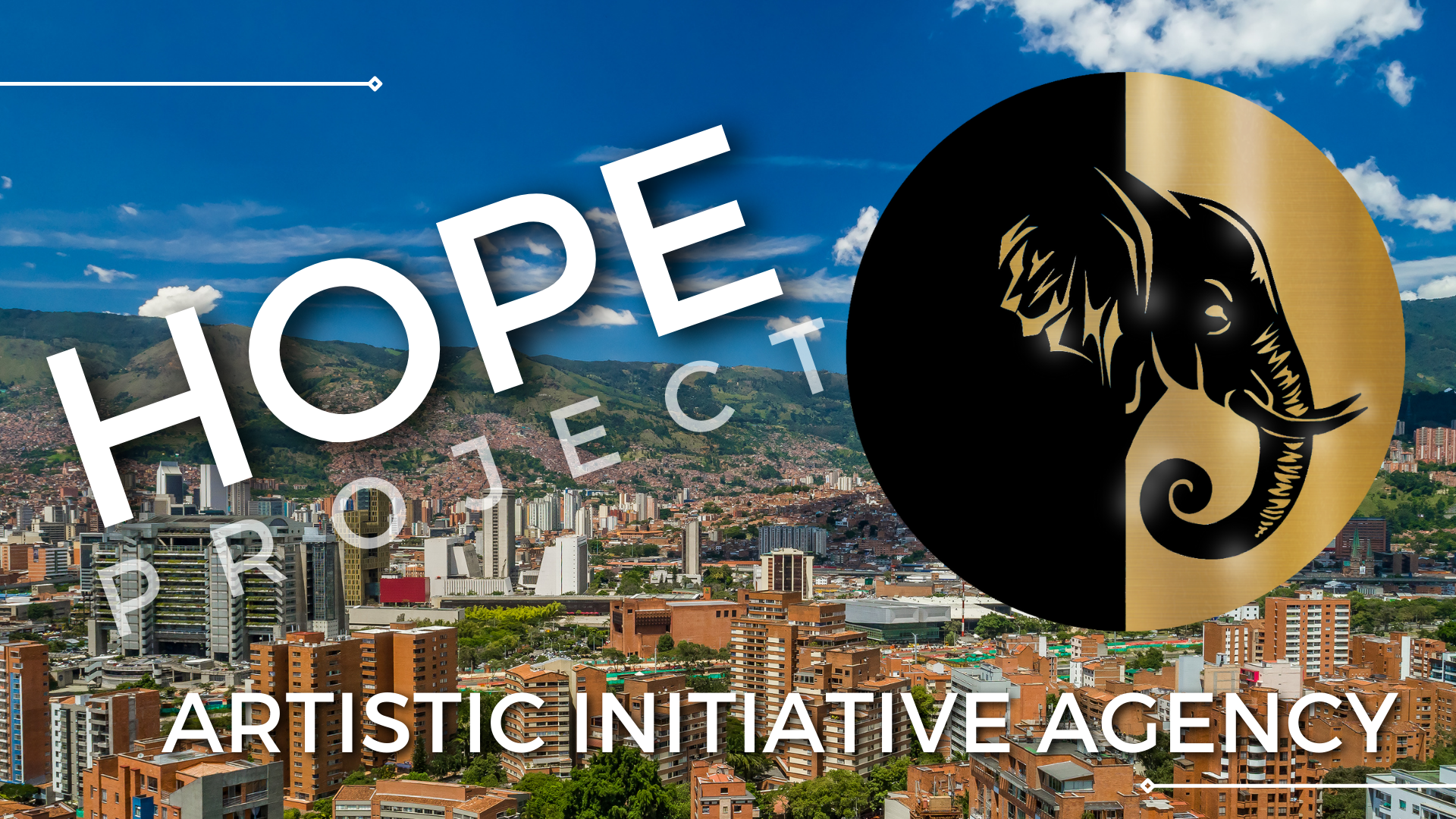 The Sunday before Christmas, a representative of Artistic Initiative Agency walked over the concrete stage of El Limonar 2’s public amphitheater, south of Medellin, Colombia. Minutes earlier, it rained over the entire city, like almost every afternoon over the past two months.

As the rain slowly started to cease, kids from the neighborhood began flocking to the concrete galleries of the amphitheater, some of them climbing into the stage. They had heard word that some American company, whose name was a tongue twister for them, had brought gifts for the kids in the community.

With the help of the representative of Artistic Initiative, one member of Corporación Legados, a local cultural and artistic NGO, started piling gift boxes against a mural of Grandmaster Flash at the back of the stage. As the two men laid the gifts down in preparation for the first Artistic Initiative HOPE Project gift drive, some curious kids attempted to see what was inside through the tissue paper, with the care of not touching the boxes.

“It’s a surprise,” the representative of Artistic Initiative said to the kids in Spanish, with a full-lipped smile on his face. “You will have to wait to see what you get.”

“It doesn’t matter what is,” replied one of the boys, of around 10 years of age. “One must always be thankful.”

On the evening of December 19, 2021, Artistic Initiative Agency, one of the fastest-growing social media marketing agencies in the U.S., organized a Christmas gift drive in Medellin, Colombia, in partnership with Corporación Legados. The American marketing agency and the Medellin-based NGO united forces to give hundreds of kids from the community of El Limonar 2 a gift this Christmas.

“As our company began to grow, we realized that we have the moral duty to give back to the community,” declared the founder of Artistic Initiative Agency in a statement after the gift drive. “I am a believer that you must provide to those in need when you have the opportunity to do so.”

The founder of Artistic Initiative and the members of the agency’s division in Medellin expressed their immense joy at the success of the first Artistic Initiative HOPE Project gift drive, where the unerasable smiles of the kids of El Limonar 2 were the protagonists.

In the early afternoon hours, the inclement wheatear throughout Medellin had threatened with dampening the event. However, as the clouds slowly dissipated around 5:00 p.m., kids began coming out of their houses at the call of the speakers announcing that Christmas had come earlier this year. Slowly, dozens of kids as young as 2 years of age and some of their parents conglomerated below the stage’s roof at the amphitheater of El Limonar 2.

Two members of Corporación Legados brightened up the gift drive with a clown performance. The uncontrollable laughter of the kids as they danced at the rhythm of Christmas songs echoed over the amphitheater.

The kids lined up by age groups to receive their gifts one by one. As each kid stepped in front of the line, they playfully displayed the seal that one of the members of Corporación Legados had stamped on them to identify they were about to receive a gift.

With statements of muchas gracias, mi Dios le pague, and Feliz Navidad, each kid expressed their gratitude as they received their gifts, immediately sprinting to unwrap them and play with their friends.

Dozens of more kids came running down the galleries of the amphitheater at the sight of the gifts. As the sun hid behind the mountains and the night came on, the piles of dolls, action figures, toy trucks, and books gradually vanished until no one single gift was left to give away.

By 7:00 p.m., after an emotionally charged afternoon full of gratitude and laughs, the Artistic Initiative HOPE Project gift drive had come to a close.

Definitely, “the best part was that we had the opportunity to give enjoyment in such an important community as El Limonar 2,” said the director of Corporación Legados at the end of the gift drive. “We had an amazing time with the kids of our community workshops, with the help of Artistic Initiative.”

For Artistic Initiative, it was a privilege to provide a spark of joy in the lives of hundreds of kids in vulnerable communities in the south of Medellin.

“Luckily, our team in Colombia brought to my attention the needs of the community up there, and I immediately took the decision of helping out,” said the founder of Artistic Initiative.

Thousands of marginalized communities in Medellin daily endure the effects of decades of warfare, gang violence, and economic inequality, which were exacerbated during the COVID-19 pandemic.

El Limonar 2 is an illustration of the resilience of the people of Medellin amidst the historical political violence and economic needs. This neighborhood was developed during the early 90s, one of the most violent periods in Medellin history, to relocate thousands of families living in city areas with a high risk of landslide. Since then, El Limonar 2 has welcomed thousands of more rural families displaced by the half-a-century-long Colombian armed conflict.

“When we decided to participate in this campaign that was going to give gifts to hundreds of kids in a community with such needs, picturing that number of smiles was staggering to me,” said the founder. “It shows you that there is a lot of people out there that we must extend a hand to.”

With the creation of the Artistic Initiative HOPE Project, the agency desires to partner with more NGOs like Corporación Legados and support more similar causes.

The four pillars of Artistic Initiative’s social mission are Happiness, Opportunity, Peace, and Education. Through the Artistic Initiative HOPE Project, the agency aspires to spread happiness, create opportunities for growth for the most vulnerable, promote peace in communities hit by violence, and help educate the next generation of artists and creatives.

“Next year, I am committing to increase our donation to give over 2,000 gifts to the children of Medellin,” pledged the founder. “This is just the beginning of the Artistic Initiative HOPE Project, and I want to expand our aid to more people in Colombia and other regions.”

“I cannot express how grateful I am for having been part of this beautiful campaign to give joy to communities that deserve it,” concluded the founder. “They don’t just need it; they actually deserve it.”

Related Topics:Artistic Initiative Agency
Up Next

Rootine Is the Customized Multivitamin You Didn’t Know Existed