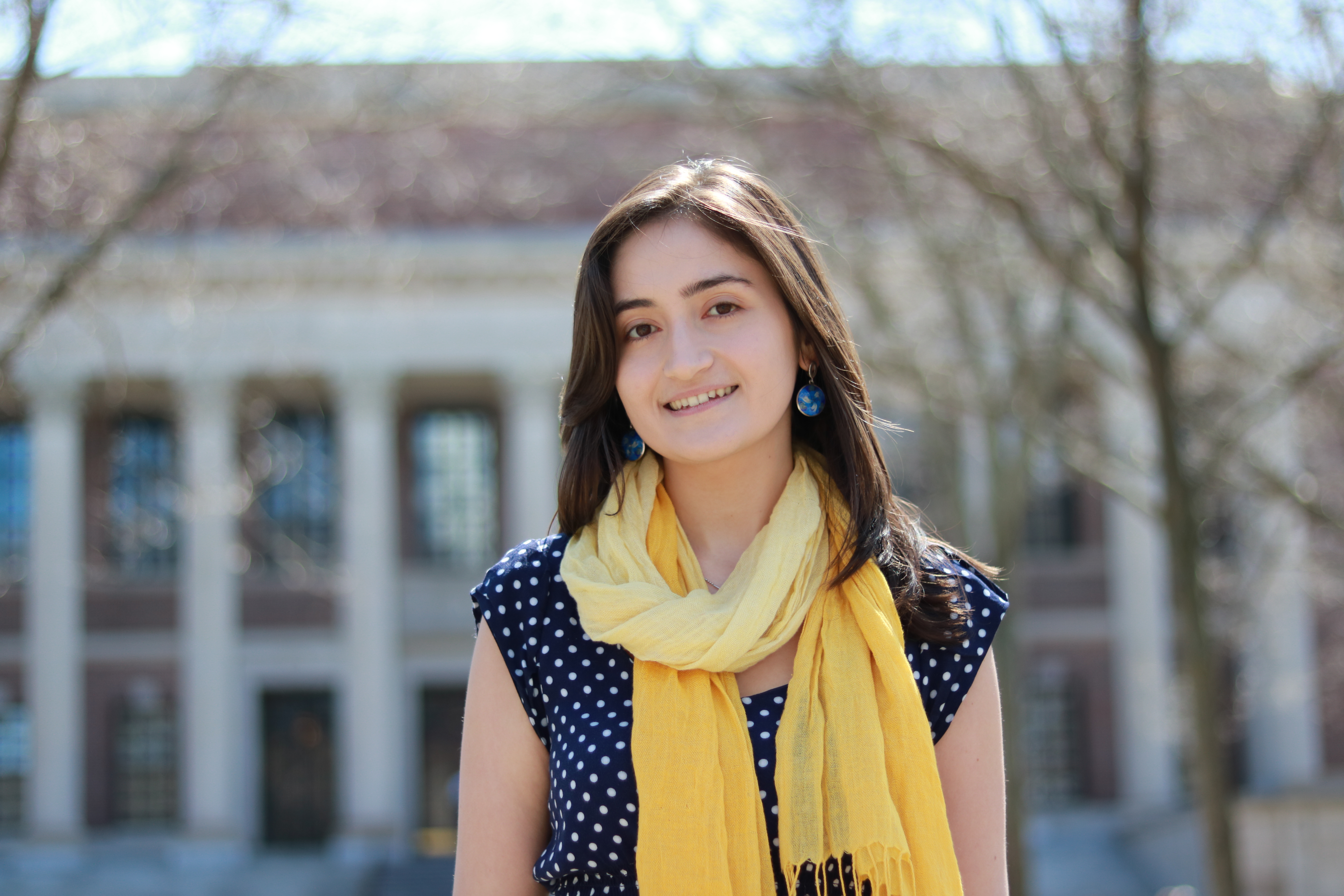 It is incredibly illuminating to talk to historians, especially to contextualize American and global history and shed light on events shaping the lives of people around the world today. And where would you go looking for up and coming historians other than the Harvard History department, which has been graduating world-renowned experts for centuries? We sat down with Sama Mammadova, a Ph.D. candidate in History who studies the history of late Medieval and Renaissance Italy, to talk about what it is like to be a historian, and how her research shapes her insights into current events and ongoing conflicts around the world. Sama’s story is also a story of an immigrant making it in the US. Her family moved to the United States from Azerbaijan in 2010, settling in Brooklyn when she was a 10th grader in high school, and she went on to get a full scholarship to Harvard University, where she pursued a joint degree in History and History of Art and Architecture. She is currently pursuing a Ph.D. in History at Harvard.

Sama Mammadova, a Ph.D. student at Harvard and political activist

Why History, Sama? And please tell us about your research at Harvard.

History is really my greatest passion in life. It teaches you to constantly see things from very different perspectives, analyze historical events from a variety of sides. History helps you develop empathy and put yourself in other people’s shoes without judgment, which ultimately makes you a better person. I am currently working on the history of the Jewish population in Italy in the 14th-16th centuries. My research analyzes how religious and social movements of the time affected the Jewish community and eventually caused their expulsion from Central Italy.

Do you feel that being a historian and the research you do has changed the way you look at the history of the country where you were born – Azerbaijan – and its region?

Absolutely. At the core of my research right now are the questions of co-existence, tolerance, and acceptance of the other, which are key for the solution of Nagorno-Karabakh’s situation – the ongoing conflict in the region. Having studied forced expulsions, I constantly think about hundreds of thousands of Azerbaijani refugees, who have been cast away from their homes for 30 years, unable to enter their homeland. At the same time, coming from Azerbaijan – a country that is known for its inclusion and tolerance, and a great number of ethnic and religious minorities, I can’t help but use it as a model, when I analyze other places.

What is the most challenging thing about being a historian? Do people turn to you for an explanation of events that are happening today because of your background?

It is a huge honor to be given this kind of responsibility, but also quite a burden. For instance, I often have to present both sides of the story by doing each as much justice as possible, which is tough. And aside from that people often turn to me asking if history is on their side. For instance, Azerbaijanis often ask me that if we are historically in the right here, why is this thing not moving along, not getting better? It is always hard to explain that history shows that sometimes being factually right is not enough to push things forward. With so many injustices happening everywhere in the world – like Black Lives Matter in the US for example- history alone is not enough to provide a solution, although it can offer an explanation.

What insight do you have into the current conflict happening in Nagorno-Karabakh?

We could begin our discussion by tracing the history of the population of Armenians who were moving from Iran and the Ottoman Empire in the 1700s under the jurisdiction of Peter the Great and later under Catherine and other tsars. The part I want to highlight is what happened in the 1990s. Up until the fall of the Soviet Union, Armenians and Azerbaijanis had been living in Nagorno-Karabakh in peace. Nagorno-Karabakh was and is still officially recognized as a territory of Azerbaijan. There were many ethnic groups living within the territory of Azerbaijan, including Armenians, Jews, Lezgins, Talysh. But the two major groups in Nagorno-Karabakh were Azerbaijanis and Armenians, living in peace for centuries. When the Soviet Union broke up, Armenian nationalists – radical elements in the Armenian community in Nagorno-Karabakh – started forcefully and violently expelling the Azerbaijani population. The Armenian military committed acts of ethnic cleansing, like 1992’s  Khojaly massacre – where 1,630 people were killed and 1,200 are still missing.

Nagorno-Karabakh is a disputed territory, internationally recognized as part of Azerbaijan

What was the reaction of the international community?

The United Nations Security Council’s Resolutions 822, 853, 874, and 884 in 1993 recognized Nagorno-Karabakh and 7 adjacent regions also occupied by Armenians, as Azerbaijan’s territory, declared occupation illegal and demanded immediate withdrawal of Armenian military forces out of the region. However, since then Armenia has still not complied with international law, the Geneva convention, or the 4 resolutions mentioned. For the past 30 years, Azerbaijan has nevertheless tried to resolve this conflict peacefully through negotiations. The United States, Russia and France formed the OSCE Minsk Group and have been mediating this conflict for 30 years. Unfortunately, the negotiations have always stalled. The situation became even worse under Armenian prime minister Nikol Pashinyan, who refuses cooperation with the Minsk Group, and who has even made comments about entering other Azerbaijani territories.

What would be the best possible resolution of this conflict?

Azerbaijan’s President Ilham Aliyev keeps offering to continue negotiations with Armenia. The proposal on the table is to have 7 regions of Azerbaijan returned to Azerbaijan, but to give Nagorno-Karabakh high autonomy, so that its Armenian population, who are Azerbaijani citizens, can live there comfortably, in peace without fear of discrimination or violence, but with a condition that the expelled Azerbaijani population can safely return as well. But for all of that to happen, the Armenian military needs to withdraw, and Armenia as a country needs to end interference. One of the major issues is that Armenia continuously speaks, unproductively, of Nagorno-Karabakh as an independent republic. But the independent Republic of Nagorno-Karabakh has not been recognized by a single sovereign nation in the world, not even Armenia itself.

What are the reactions to the conflict in the US? How do Americans/your fellow Harvard students perceive this conflict?

My peers at Harvard and elsewhere have been watching the Armenian military’s missile attacks on the Azerbaijani population happening these days in cities that are hundreds of miles away from the border. Seeing that, it is hard for anyone to support Armenia in this conflict. But still, there is so much misinformation in the media. A huge issue is that Armenian media, and as a result American and European media tends to describe this conflict along religious lines. A juxtaposition is created between Christian Armenia and this Militant Muslim Azerbaijan that is out to get everyone. And that is a false binary: Azerbaijan is a secular state that doesn’t have an official religion. Hundreds of thousands of Azerbaijanis of different religions live together in harmony, among them 40,000 Armenians even today. The Armenian church in Baku is still standing, and there are others in other cities. Armenians and Azerbaijanis continue to live together side by side. So to create this false dichotomy between Christians and Muslims and make it the highlight of the war is simply incorrect. This is not a religious conflict. That is something I have to continuously explain to my American friends, the majority of whom are Christian.

What more can the United States do to support Azerbaijan’s legal claim to its territory?

The US has always supported Azerbaijan’s territorial integrity, and Azerbaijan is thankful for that. However, the Armenian lobby has been prominent in the US for over a century, while Azerbaijanis have only been moving to the US since the fall of the Soviet Union, but really principally within the last 10 years. As a result, on a local and state level, there is a lot of support being poured into Armenia. What we would love US politicians on all levels to do is to promote a two-sided dialogue. Also, safety is a big issue for people speaking about this. Azerbaijani demonstrators in LA and even at Harvard have been attacked. My friends and I have been receiving threats and online harassment. So it would be very important for us to have some kind of institutional support from the US to help ensure our safety as this conflict keeps unraveling.

For those who would like to learn more about Azerbaijan, the conflict, and history in general, what do you recommend?

As a historian, I am trained to think critically and to constantly critically analyze my sources, and distinguish between something that is factual and can be verified, and something that is more provocative, something that is clearly fake. Unfortunately, not everyone is a trained historian, and it is often troubling for me to see a lot of people not being able to distinguish between what is true and what’s being promoted. And the Armenian media has been quite prominent in the US and around the world pushing stories for the last 30 years that could be easily verified and proven to be factually incorrect. But it takes so much effort on our part to be constantly debunking things that pop up in the media. My historian’s advice is to turn to official sources. Look at the UN website, look at statements of heads of states. Also reach out to people of different backgrounds like myself, and other academics who are not necessarily Azerbaijani, but have studied the history of the region and this conflict for a while now.

How This Young Entrepreneur Built a 7-Figure Business on His Own Terms and You Can Too!

Menstrual Health Matters. Say It Louder For The People In The Back.