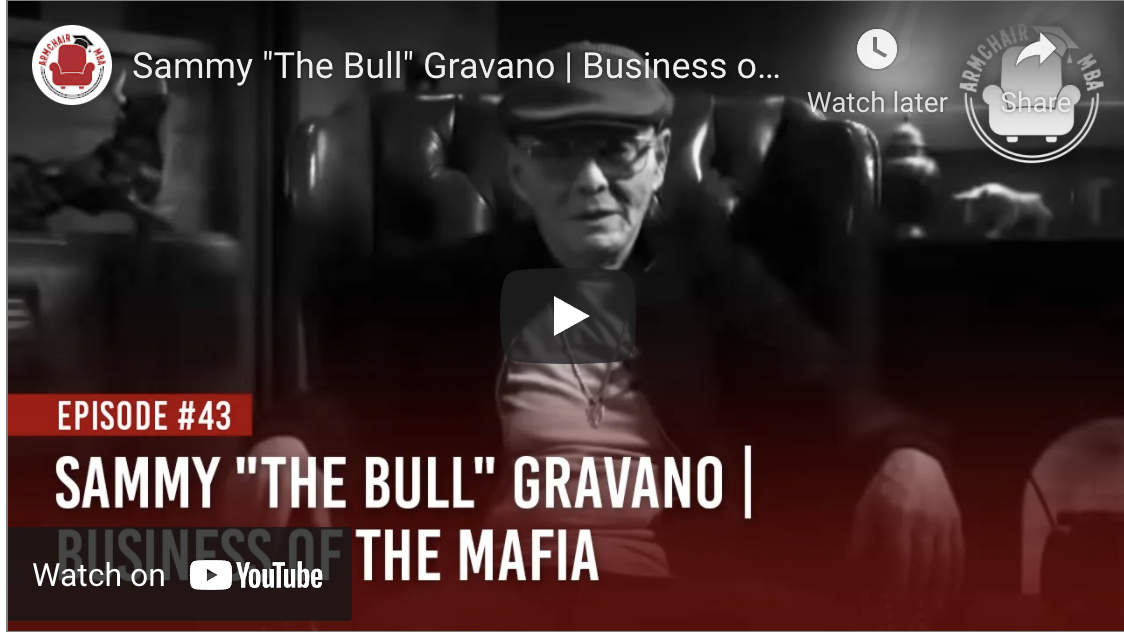 I had the opportunity to interview Sammy “The Bull” Gravano who was the underboss of the Gambino Crime Family during the second half of the 80s.  He later informed  and testified against his boss John Gotti which resulted in a life sentence.  Sammy later went into the Witsec program but later opted out in order to be with his family.  When he agreed to the interview I was a little nervous as I wasn’t sure what angle to take as well as I didn’t want to ask him questions that were already asked.  My podcast focuses on the business aspect of crime as I went with that line of questioning.  I was surprised that Sammy offered some valuable business and management lessons.  After all, he was the number two man in a 400 man organization, plus thousands of associates, who was believed to make over $500 million a year (in the 80s!).

The Armchair MBA Podcast was launched with the goal of trying to extract and unpack business lessons from various sources.  Sammy was naturally a great example of someone who went the wrong direction in life, but nevertheless, was successful in business despite leveraging illegal means to get it done.  I found him to be extremely knowledgeable when it came to reading people.  He appears to utilize lessons learned in “the life” as he now runs a growing media company.

Sammy has over 500,000 subscribers as people from throughout the world are eager to hear his stories of life in the mafia.  Recently many other informants with podcasts, but nothing comes close to Sammy as he was considered both a gangster and racketeer.  I was searching for a correlation between how “successful” illegal mobsters and legitimate business people operate.  Is business all the same or do criminals have some distinct advantage?  Many people believe that if you take away the gun, knife or threat of violence from organized crime, they are thugs in suits and not business people in any way.

You watch the full interview here on the Armchair MBA Podcast (Click Below):

The Armchair MBA is hosted by Tom La Vecchia, MBA (formerly of the New Theory Podcast) covers business, organized crime and everything in between.

Please drop me a line or comment and let me know what you think of the interview!

Related Topics:Sammy The Bull
Up Next