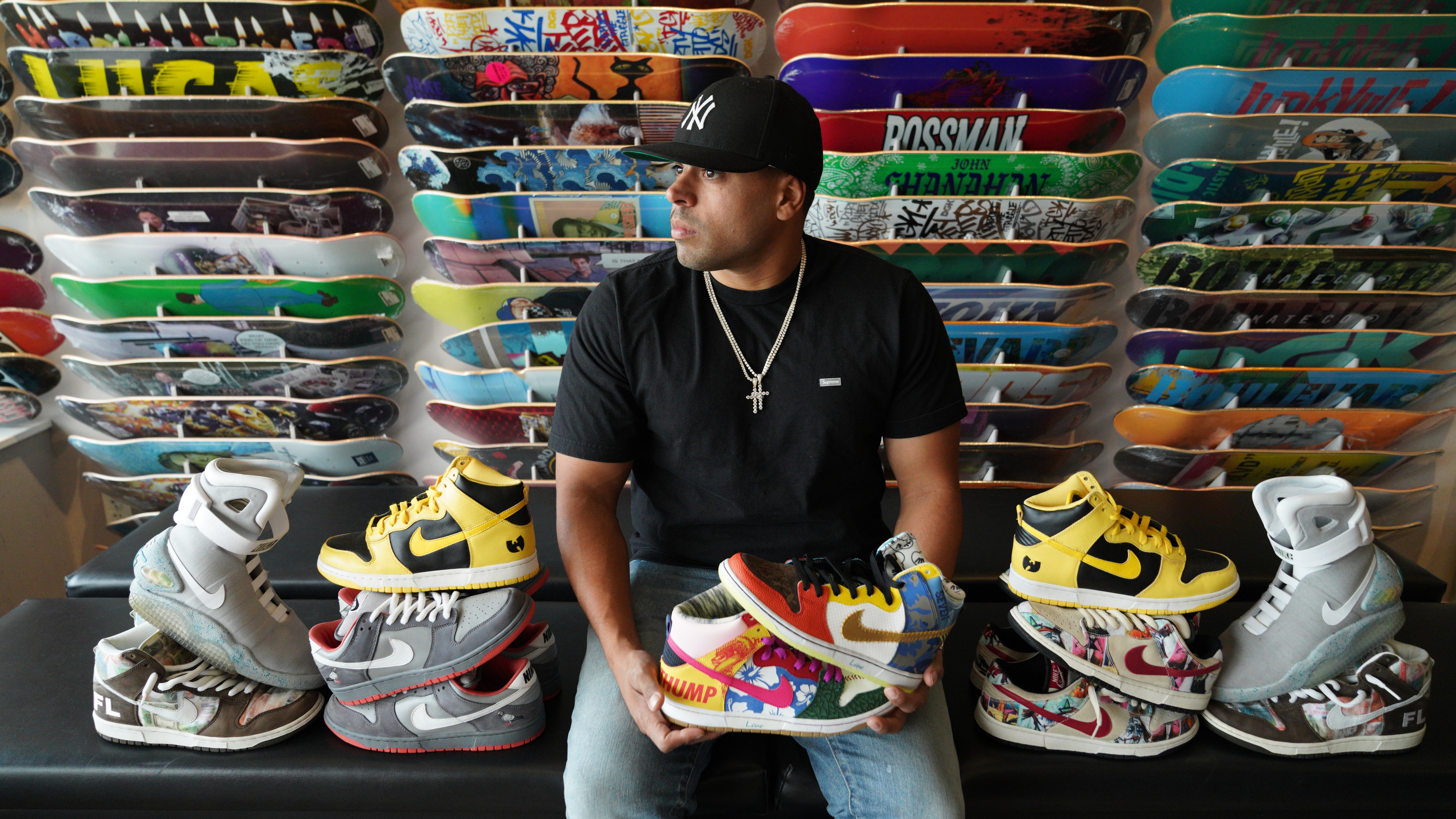 Chris Robinson, known as SBCollector, is a renaissance man of the modern age. A sneaker collection worth multiple millions, the owner of his local skate shop and a bright future in the music world. I “sat down” with Chris (he’s in New Jersey, I’m in Chicago, but the internet closed the distance) and discussed his career, hopes and dreams. To understand the music of SBCollector, I have to dig into his past. A past paved by sneakers.

I asked Chris to walk me through his space, walls stacked high with shoe boxes, and display cases lined with rare and colorful sneakers. As he showed me around, he talked about his early days. “The first pair of Nike’s I ever purchased was when I was 16 working at McDonalds and I got my first paycheck. I went right to A&J Sneakers in Asbury Park, NJ and purchased a pair of White with a navy blue check Air Force One low-top, put them on, and wore them out of the store. It was one of the most satisfying things I’ve ever experienced.” I asked if he still had the shoes. He laughed, “I wore those things into the ground. My mom made me throw them out because they were totally falling apart.” But Chris doesn’t seem to have any regrets. He could wear a new pair of shoes every day for years.

After our shoe room tour, Chris took me into his studio. A back room equally as packed, but less with shoes and more with musical instruments, drum kits and big, bassey speakers. I asked Robinson to describe his sound for me. “It’s a blend. Old school hip hop made with newer technology, then run through analog systems.” He points to his gear. “I get obsessed with things. From shoes, to music stuff, the more that surrounds me, the more I’m inspired.” And inspired he is. I listened to his singles before our interview, and was struck by the fullness of the sound. Something new artists typically struggle with. I asked him about it. “Being in the sneaker world, I’m surrounded by culture” he says, “and I’ve gotten to know a lot of very talented musicians. I help them get a rare pair shoes, and they’ll give me tips on my music. I love to learn, and I just love making music.”

It’s easy to see where SBCollector’s influences come from, but, like everything he touches, he makes it his own. I ask him what his future holds. He looks out the window of his studio, reflecting for a moment. “I want my music to be a soundtrack to someone’s lives. I want some kid to get his first pair of AF1’s on his McDonalds job money and I want him to walk home in them, listen to one of my tracks, and feel like a million bucks.” I end by asking Chris if he remembers what he was listening to when he got his first pair of sneakers. He laughs, and says something, but the connection cuts out. I didn’t hear the song, but based on the look on his face, it was as influential as the shoes on his feet. You can find Chris’ debut singles on Spotify, streaming now.

Hard Work and Persistence Have a Cumulative Effect