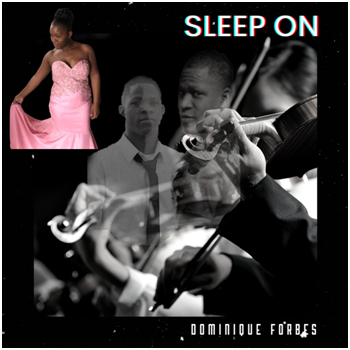 Sleep On is a professional song that stemmed from the death of a loved one, Devon Brown. That was written, sung and released in 2021 by Mrs. Dominique Forbes, a native of The Bahamas.

“When I sent the rough draft of my song to a Nigerian producer, the song, Jealous by Labyrinth came to his mind instantly.

He got to work immediately and completed the instrumental as though he had picked the instruments directly out of my brain while adding some of his own styles to the project! I am well pleased with the first version of this song!” Mrs. Forbes exclaimed.

I told him I wanted the sound of an orchestra on this first version of “Sleep On.” The vocals were recorded by Todd at Empower Media In Nassau, Bahamas.

“Sleep On Remix Island Style” was released earlier in 2021 and was produced in Argentina. From there, this project was completed in Brazil,” the natural Bahamian storyteller shared.

As for the song itself, here is the effect that it had on Dominique as the artist the very first time that she sang it in front of her family members:

“I could not make it past the third line! I wept, and there was not a dry eye in the room! Some people ran through the front door while others ran through the back door. Several family members escaped to different bedrooms while my Aunt Maxine encouraged me to ‘Do this for Smokey!’

The cries of my family could be heard throughout Dumping Ground Corner in the community of Bain & Grants Town. I did not even realize what God was doing through this song at the time!” said the stay-at-home-wife-and-mother.

“The song made me weep also. Just thinking about that, I mean… WOW! It’s like that song brought deliverance. It made you cry your soul out! Asking God… why?” were the words of one of my Uncles.

“On the night of Devon’s death, I wrote this song. His life was taken by the hand of a gunman. His death has brought an even stronger sense of awareness to me. We have no right to take anyone else’s life! Devon was headed to greater heights. His death did not go in vain by the power of the almighty God!” the Singer/Songwriter emphasized.

“Our entire family still mourns as of today, yet I feel like we are blessed because we could have buried multiple family members as a result of that incident! Several of my cousins were caught in the crossfire. As a result of this, I give God even more praise!” added the wife and mother of five in the person of Mrs. Dominique.

“They all have to walk by the scene of his death and probably even walk in that spot daily. Could

You imagine?” added the author of two children’s books. The chorus of the song goes like this:

“Let’s lift the heavens with our praise, Although he’s gone

Remain steadfast in the faith And be strong

He’s asleep in the grave Until TheSaviour says,

I am ready to collect my sheep Sleep on”

Mrs. Forbes continues, “The song is a paradox; thanking God in times of trouble! The song is built on the biblical foundation of Job 7:9-10 NIV, which says, “As a cloud vanishes and is gone, so one who goes down to the grave does not return. He will never come to his house again; his place will know him no more.”

In this scripture, I believe!