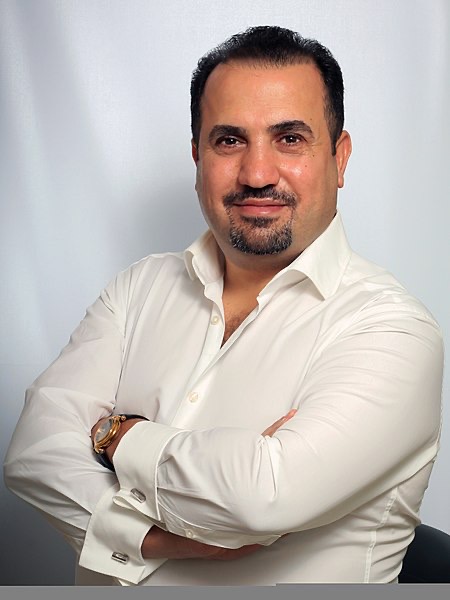 I spent most of my youth on the move between the countries of the former Soviet Union and, later, different parts of the Russian Federation.This is not the most typical developmental path for a boy who was born in 1972 in a refugee camp in Gaza and was the eldest son of a large family. For me it is a great responsibility to be a representative of my people, wherever I am, and it generates a sense of purpose. In 1990, I came to the USSR, and the first thing I did was to study the language in Tbilisi (Georgia), because without a language a doctor remains not only dumb, but also blind. By distribution, he studied in the city of Vinnitsa in Ukraine for one year, after the collapse of the Soviet Union in 1992 he moved to live in Moscow and entered the Faculty of Medicine of the Moscow Medical Dental Institute, which he graduated with honors.

By that time, the chaos that was taking place in a huge country, including in the medical field, had subsided a little, and I was able to come to grips with what I had always dreamed of – urology and pediatric surgery, “says Dr. Matar. In 2002, Asaad Matar defended his thesis and received the degree of candidate of medical sciences in his specialization.In the future, he, like any modern doctor, will constantly improve his level: postgraduate studies in the Department of Urology and Neurosurgery of the Moscow Research Institute of Pediatrics and Pediatric Surgery of the Russian Federation, constant participation in Russian Congress “Modern technologies in pediatrics and pediatric surgery”, membership in the International Society for Hypospadias and Sexual Disorders, Head of the Department of Pediatric Urology-Andrology at the Moscow Research Institute of Pediatrics and Pediatric Surgery, Nikolay Bogor’s medal for his contribution to the development of surgical andrology and in 2012 the title of professor.

Asaad Akhmadovich is a member of the Russian and European Association and urologists, a member of the International Andrology Association, and a member of the International Association for Sexual Medicine. In 2017, he was President of the First World Congress on Hypospadias (Pediatric Urology – Andrology) with the participation of colleagues from 48 countries, which took place in Moscow.Dr. Matar is fluent in the technique of performing microsurgical and plastic surgeries, both on the genitals and on the organs of the urinary system – he has already completed more than ten thousand successfully performed operations in the Russian Federation and abroad. During the period of his practical activity he attended large international conferences and congresses, as well as completed internships in Italy, France, Great Britain, Germany, Greece, Turkey and in Arab countries.

“Today, the main thing that worries me is the health of my little patients.

Probably the most important words with which I want to address parents is a huge request to seek highly qualified help at the very moment when your baby was found to have some or developmental pathology in the field of urology.

If the child is initially provided with high-quality surgical treatment, then the success rate of the operation will be high. Otherwise, it is much more difficult to predict the results of treatment. If the child is brought to me after several unsuccessful operations, I have to work with mistakes and complications, actually correcting them, so the operation may be difficult to solve, “- continues the surgeon.