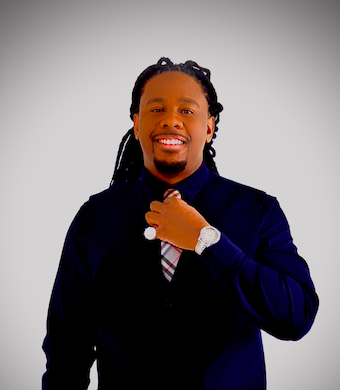 Sometimes people find their true passion by chance. Often people think that there is a path for them to follow, but once in it they are forced another way and find out that there was something else meant for them.

This is the case of Tavion Maulstby (aka Tee The Barber), who was working as an electrician but after being laid off, he had no other viable option but to work in the salon and barbershop with his Mother and Father. This was the turning point for him, as he slowly began to fall in love with barbering.

More than a hustler, Tee The Barber has been an inspiration for many, showing that working hard definitely pays off. Coming from a barber/hairstylist background, Tee has mastered his technique to the point where he is considered one of the most famous barbers in the West Coast.

“I was motivated to get started in this business from watching my parents as they worked hard to provide for us. Actually my determination is because I wanted to be able to provide for myself initially. I strongly believe that establishing my business is the key to unlocking freedom that I may eventually be able to spend quality time with my family” Tavion shares.

The biggest challenge for Tee was staying consistent with his efforts, as well as being patient with the business and being able to learn how to adapt. When he first started his business, he was inconsistent with things that are vital to building a business, such as marketing and building interpersonal relationships with clients.

“I found that developing a track of consistency is a vital component of developing any business that most do not fully grasp.” Tee says. “Also, learning how to adapt to new standards is also a challenge when starting a business–what worked 10 years ago may not necessarily work today.”

For Tavion realizing this and being able to take constructive criticism was vital in order to expand and scale his business. For this, mindset is also extremely important. Tee The Barber actually believes that without the proper mindset, there is no business.

“My advice for those trying to start their own business is to get started now! There are people out there who consume tons and tons of content without using that content for action. People make excuses as to why they cannot start a business and instead do nothing. Analysis paralysis is one sure way to slow down your progression.” Tavion claims.

What Tee The Barber thinks is that there will never be a perfect time to start your business, so it’s best to just start now. For Tavion this eventually meant moving from Florida to California, which was the biggest obstacle he has overcome so far.

“At a barbering event in Orlando, Florida, I met Dave Diggs, a barbershop owner out of San Jose, CA. Having seen his success from social media, I sparked a conversation with him to pick his brain on how I could reach greater levels of success as well. Shortly afterwards, this conversation led me to eventually dropping everything I had in Florida and moving to The Bay Area to reach new success in the Barber industry. Imagine telling your long time clients, friends, and your family that you’re leaving to the other side of the country to work with somebody you hardly know.”said Tavion.

A lot of people were supportive of his decision, but still some were not. He was terrified but excited about what was to come–it was a scary decision but the best decision he has ever made.

“It turned out to be a decision to not only propel my career but to also motivate and inspire others from back home and world wide to not settle for right now, and to give proof to others in the hair industry that anything is achievable .” Tavion confesses.

Three years after that decision, Tee The Barber had already been able to establish his own hair product line and quadrupled his income. This is partly because Tee The Barber is different from his competition in many ways: he is a master of his craft and still spends countless hours on a daily basis (still to this day) on perfecting is craft.

Tee The Barber’s next projects include continuing to promote his hair product line “Favored Essentials”, which was released to the public last year. He also wants to continue to grow in the entertainment industry and create even more large opportunities for other barbers and stylist throughout the country.

To find out more about his work or get a haircut, go here!

Related Topics:Tee The Barber
Up Next

Hard Work Always Pays Off: Katie London And Her Journey To Happiness