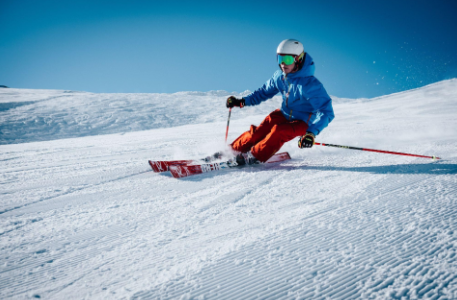 For most people, the typical idea of a holiday is a chance to unwind, relax, and try to forget all the hustles and bustles of everyday life. For some, a perfect holiday would be somewhere in places like the Maldives, the Caribbean, or South Pacific; these are some places where you will find picturesque views and glorious sunshine.

For others, it could be somewhere within a city, like Paris, Barcelona, or Rome. Finally, some would prefer a walking holiday, like visiting the Peak District in England.

However, these holidays may sound boring to some people, who would rather spend their time on mountaintops skiing or snowboarding. In many colder regions around the world, especially in European nations, skiing is quite a popular activity.

While it is mostly seen as a leisurely pursuit, it has also become quite a competitive sport. Skiing has been a competitive sport since the early 1800s. When the first-ever Winter Olympics took place in 1924, skiing was one of the official sports. Since then, there have been various forms of skiing taking place ever since.

In this article, we will discuss some of the top male and female skiers.

Who Are Some of the Best Skiers of All Time?

Some of the top skiers of all time are:

Lindsey Vonn is regarded as one of the most successful female alpine skiers. She was the former World Champion for the US Ski team and had more World Cup Crystal Globe titles than any other skiers, male or female.

She was originally born in Minnesota but relocated to Colorado as a teenager because her parents wanted her to focus on skiing. Overall, she has also won three Olympic medals and four World Cup titles from 2002 till the 2018 Winter Games.

Bode Miller is a famous skier in both the Winter Olympics and World Championship. The gold medalist also had a successful run in the 2005 and 2008 World Cup Championship, which makes Bode one of the top male skiers in the US. He is also known for his inspirational quotes.

Bode Miller’s 33 victories made him the best World Cup skier in the world. He also won a lot of alpine skiing – all five disciplines of alpine skiing more than five times. Miller has also won six gold medals at the Winter Olympics, which is more than any other skier from America.

Another legendary name in the world of female skiing is Janica Kostelić. Hailing from Croatia, her family has been involved in skiing for many years – for instance, her elder brother is also a skier, and her father is a skiing trainer. As Janica competed, her family traveled to different parts of the world.

Janica Kostelić participated in the Nagano games when she was just 16 years old. She won her first World Cup title at the young age of 19 years. Janica won six medals at the 1998, 2002, and 2006 World Cups; four were gold medals. At the 2002 Winter Games, Janica was the only woman to win three gold medals in alpine skiing.

Ingemar Stenmark is another top name in the alpine skiing world. He came from Sweden and started skiing at the age of five years old. He won his first National Championship when he was eight years old in 1964. He also started training for the Swedish Junior National Team at 13 and won his first World Cup Race at the age of 18 years in 1974.

Mikaela Shiffrin is one of the most formidable names in the world of skiing. Born in Colorado, she is the daughter of former skiing champions. She started her journey into skiing as a teenager and showed great talent at slalom. The 2018-2019 season was her best – Mikaela won 17 World Cup races, thereby setting a world record.

Shiffrin also participated in the 2014 and 2018 Olympics; she won three gold medals here. With a personal goal of at least five gold medals, Shiffrin hopes to keep winning at the Winter Games.

Alberto is a skilled and charismatic skier known for being the first alpine skier to win three medals at three different Olympic Games. He was born in Bologna and looked into many different sports before choosing skiing as his final career choice.

Alberto became particularly known for his aggressive style of skiing, earning him the nickname Tomba La Bomba. He also debuted at the Calgary Winter Games in 1988 and won the slalom and giant slalom events. At the peak of his career, Tomba was one of the most dominating names in the world of skiing and secured the World Cup Championship in 1995.

When it came to women’s alpine skiing in the 1970s, Annemarie Moser-Pröll was a prominent name. She grew up in Austria and became a part of the Austrian ski team as a teenager. She won her first World Cup in 1971 and has been an unstoppable force.

Moser-Pröll was quite a dominant skier and set a record of 11 consecutive wins between 1972 and 1973. However, she still did not win a gold medal – she won two silver medals in the 1972 Olympics. And she missed the 1976 Olympics because she had to take care of her father. Then, she won her first gold medal in 1980 at Lake Placid.

Lasse Kjus is a skier known for overcoming incredible odds to become one of the top skiers in the world. The skier almost got derailed after tearing a nerve on his left deltoid muscle in 1991. Due to this accident, his left hand almost became useless, which made it difficult for him to ski.

Tina Maze is one of the most famous skiers of today. She is a decorated alpine skier from Slovenia. She started her skiing journey at the young age of three years and made it to the Women’s B Ski Team while she was in high school.

Soon enough, Maze became a famous name as a slalom specialist. She earned the Super-G at Vancouver and silver medals at the giant slalom events. She also won the best Olympic Finish. Tina Maze also has 26 World Cup titles and double gold medals at the Winter Olympic Games in Sochi in 2014.

Marc Girardelli is a famous alpine skier who gained fame in Luxembourg by participating in three Olympic Games. While he officially is from Austria, he represented Luxembourg during his skiing career, thereby earning his name – the Austro-Luxembourger.

Marc’s career was at his highest during his youth, especially when he won the Topolino Race, considered one of the most competitive skiing events for young skiers. During the 1980s and 1990s, Marc showed his skills during the Olympics, the Alpine Skiing World Cup, and the World Skiing Championship.

Another top-notched female skier, Anja Pärson, was the first to win at all five disciplines at the World Cup alpine ski race. Sweden’s most successful female skier, Anja, was coached by her father, which Ingemar Stenmark, her childhood hero, also frequented.

Thanks to her rigorous practice sessions, Anja achieved success very early. She won her first World Cup race at the age of 17 years. Next year, she won a gold medal in the slalom even at the World Championships. She also took part in the Winter Games of 2002, 2006, and 2010, winning a total number of six medals.

The world of skiing is full of talented individuals. All these skiers have worked hard to become the most famous names in this sport. These are all top-level athletes and have participated in and won several medals in various esteemed sporting events like the Winter Olympics, etc.

If you know of any other male and female skiers that should be included in this list, you can let us know in the comment section.