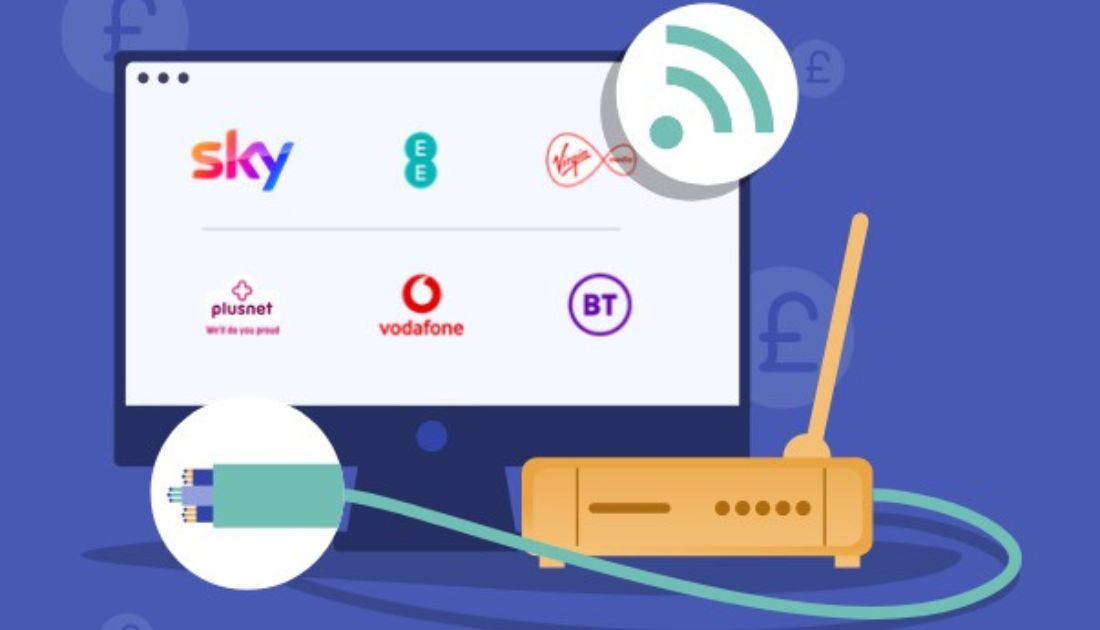 Admittedly, finding the best broadband deal in the UK is quite a task – first, one needs to define what ‘best’ actually means. In this instance, ‘best’ means having the most features for your money.

However, even with this in mind, finding the right broadband plan can still be quite tricky. It is important to consider all the different things that you may need in order to find the best deal, such as the amount of data used by your family, and whether you need the Gigafast or the Superfast option.

Read on to find out more about how I weigh up the ‘best’ broadband deals from the Big Three – BT, Sky and Vodafone.

After all, most Britons will be using one of these providers already, so it makes sense to focus on them only.

Vodafone’s Full Fibre – How Fast Is It?

Vodafone has been a big player in the telecom’s world for a long time. It made the UK’s first mobile call in 1985 and is currently one of the biggest companies in the country. It owns networks in 22 countries and offers mobile phone contracts and broadband to more than 19.5 million customers in the UK and elsewhere.

The two biggest names in the UK broadband industry, BT and Vodafone, offer broadband packages that are both affordable and highly functional.

Vodafone’s Fibre One broadband deals start from £22 a month, for an 18-month contract. However, introductory offers and discounts are available on several price comparison websites. For example, we found some broadband comparison websites are offering £150 cashback on this plan if you use them.

The BT Complete package offers a complete Wi-Fi network that can be used throughout your home. It also comes with a £100 money-back guarantee. There is also an Apple TV option, which provides a cloud-based television service for use with an Apple TV set top box.

Both companies provide competitive fibre broadband deals, which can be used for anything from online gaming to Netflix streaming. If you’re an existing Vodafone mobile customer, then you can save up to £380 a year when you combine your family’s broadband and mobile plans. And with the announcement that Vodafone is increasing its 5G network to all UK airports, the idea of switching everything to Vodafone starts to make sense.

The Vodafone Fibre 1 will provide a decent connection for most users, though you won’t be able to handle 4K content, and the average upload and download speeds aren’t that great.

While it might not be the fastest fibre broadband available, the BT Fibre 1 offers a lot for your money. It includes useful extras, such as a free router. It also has no traffic management, meaning that you can get a fast broadband connection without the hassle of a fair-use policy.

However, you won’t be able to download as much as you could on the cheaper BT Superfast 2 package.

While the BT Complete package might be the most expensive, it’s still a good value. In addition to the Wi-Fi discs, you’ll receive a £100 money-back guarantee, along with up to fifteen licences. You’ll also get a comprehensive Wi-Fi Xperts support system, which helps to troubleshoot any issues that may arise with your Wi-Fi.

The Virgin Media Fibre 1 deal isn’t as impressive as its counterpart, but it’s still a decent option. It delivers average download and upload speeds of 35Mbps and 38Mbps, respectively, and is more than capable of supporting iPlayer streaming and Netflix browsing.

The BT Fibre 2 plan isn’t as fast as the Vodafone Superfast 2, but it’s much cheaper. You can also opt to sign up for the BT Complete deal, which includes a £100 money-back guarantee, a free router, and a full set of Wi-Fi discs. You’ll also have access to a range of other useful extras.

The Vodafone Fibre 1 is the cheapest fibre broadband deal available from Vodafone, but it’s not the quickest. The company’s fibre to premises technology delivers a full fibre connection straight to your home. Unlike most fibre-to-the-cabinet packages, you don’t have to pay for extra set-up fees, nor do you need an engineer to visit your property. It should be a smooth and simple process, although it might take a little while to activate.

Superfast – What does it mean and how do I get it?

Generally, Superfast means any connection with at least 30 Mbps. There isn’t an ‘official’ definition of Superfast, so this one is good enough for me.

There are many superfast broadband deals available to home users in the UK. However, some providers offer better speeds at lower costs than others. Vodafone is one of these, and they’ve recently launched a few new packages. The company has been around since the early 1980s and is now one of the UK’s leading telecoms companies, with a network covering 22 countries and 444 million customers.

The company offers its customers a range of services, including mobile phone contracts, broadband and TV. It’s one of the largest communication companies in the world, and it’s also one of the largest providers of superfast broadband. Its superfast fibre broadband connections are available to 96 per cent of homes in the UK, but the coverage doesn’t extend to purpose-built flats.

Vodafone offers several different packages, ranging from entry-level fibre broadband to the most advanced Ultrafast FTTP services. The company also offers an Apple TV service that is delivered via an Apple TV set top box. All these features are designed to deliver high-speed internet for affordable prices. Its Apple TV offers access to cloud-based Vodafone TV, which includes Netflix and BBC iPlayer. Its broadband packages are aimed at home users, and it also offers a whole family broadband solution.

The cheapest of the superfast broadband deals from Vodafone is its Superfast 1 package. It costs less than some ADSL offerings and provides average download speeds of 35Mbps. It doesn’t come with a home phone line, so it’s suited to a smaller household of users who stream or work from home. It’s also compatible with online gaming, but you’ll need a good internet connection to make the most of this service.

The Vodafone Superfast 2 package is a little more expensive, but it comes with a few extras. It’s faster than the Superfast 1, and it can handle high-speed streaming and gaming. It doesn’t come with a Home Phone line, but it does include a standard rate for calls. The package includes unlimited broadband usage, a 1-year Apple TV Plus subscription, and six months of free F-Secure SAFE antivirus software.

Vodafone’s Superfast fibre is delivered through the BT Openreach network. The company has a deal with CityFibre, a company that provides ultrafast broadband to a large area of the UK. It’s also got a partnership with Virgin Media, and the two companies combine their broadband networks to create Hyperoptic. This fibre-to-the-premises technology delivers full-fibre Internet directly to your property, making it faster than standard cable and ADSL services.

It’s not the fastest in the country, but it is faster than the other major FTTP providers, including rival Virgin Media.

Going Gigafast – Do you need even more speed?

Vodafone is one of the UK’s largest telecoms providers, with over 19.5 million customers. The company provides a range of home broadband services. Its fibre optic Gigafast broadband deal is now available in parts of the UK – but not all, so check your postcode.

Gigafast offers super-fast download speeds of a frankly ridiculous 900Mbps. It uses a separate network from BT’s Openreach phone line – delivered over a fibre-to-the-cabinet connection and is available to 96% of the country’s homes. However, a fibre-optic connection requires laying several fibre-optic cables, and this can increase set-up costs and times.

This is a good choice for those who do not have a fixed line. The company’s GigaCube service boosts the Wi-Fi in your home when the connection is slow. The system is particularly useful in locations with poor ADSL reception. A free six-month trial is included. The GigaCube also includes rewards and exclusive deals, so you can upgrade your plan when you want.

When signing up to a new broadband deal, you’ll be given an installation date. This can take up to ten days, and some engineering tasks may mean that it will take longer.

During this time, you’ll be asked when you’d like your broadband and other home services to be connected. If you can’t connect your services at the time you’re told, you can claim a refund.

The high-end Gigafast package from Vodafone has average download speeds of up to 900Mbits/sec. It’s a service that’s in line with rival services from BT and EE. It comes with extra features, such as Amazon Alexa. It’s also a great choice for gamers. You’ll be able to stream HD video content, and you’ll also get access to Vodafone’s 4G network.

It is important to note that the Gigafast broadband connection is not for everyone. Most people will be better off with a 100Mb or less, and those who do a lot of downloading or streaming will likely be better off with a faster broadband connection. The Pro Gigafast broadband package is the fastest option from Vodafone. It comes with 500Mbits/sec of download speed, as well as a range of Pro extras.

While most of Vodafone’s broadband packages are fibre-to-the-cabinet, some of its fibre-to-the-home (FTTH) options can be very affordable. In fact, they are a far more affordable option than BT’s fibre broadband deals. This is especially true if you’re interested in competitive gaming.

How can I reduce my broadband costs?

With the cost-of-living crisis rumbling on, broadband costs are also putting additional strain on household budgets. Thankfully, a government initiative called Social Tariff allows those on certain benefits to reduce their broadband costs by up to 50%.