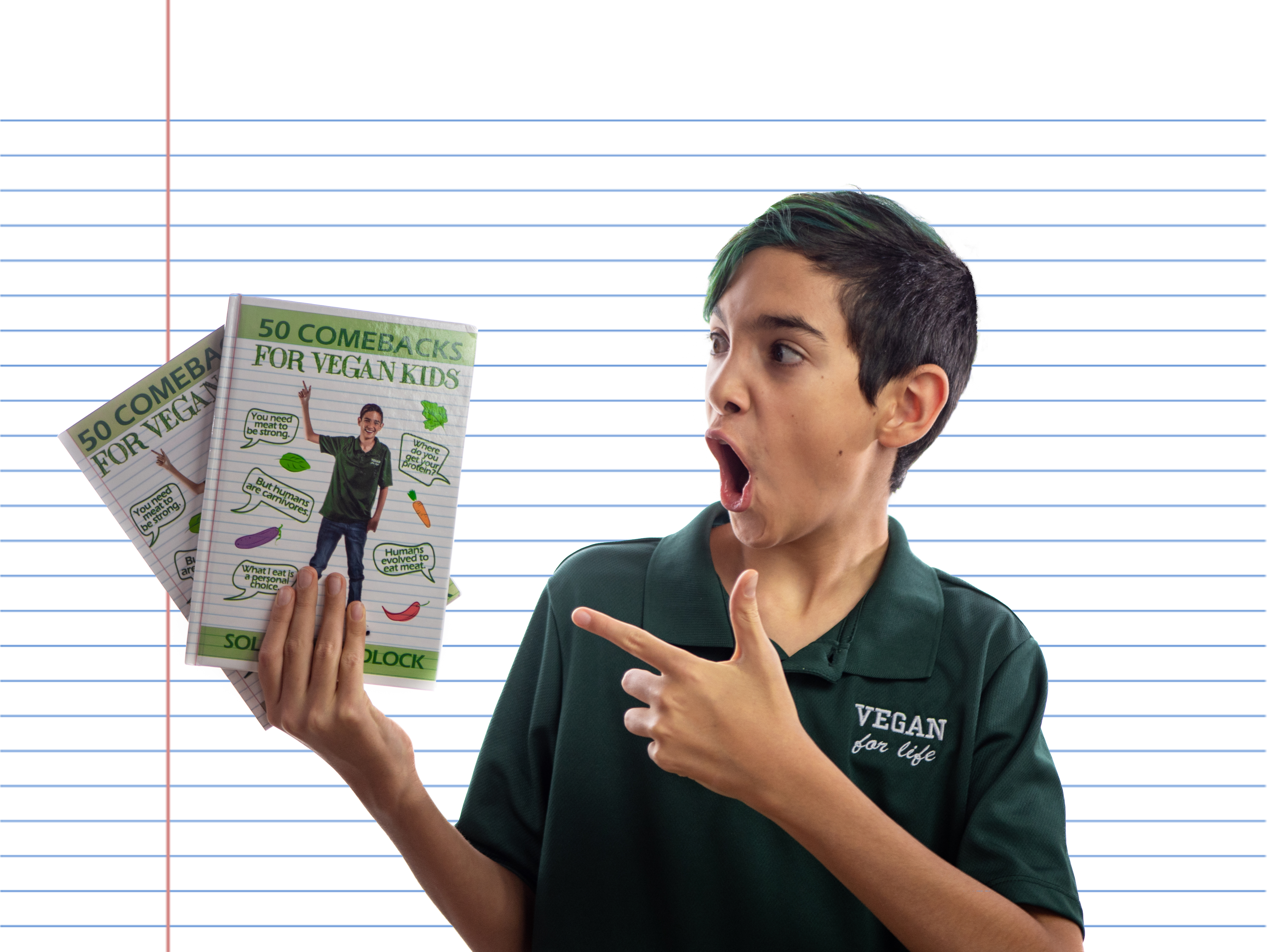 Solomon Tadlock understood the importance of health and veganism early on. The son of best-selling author and autoimmune disease reversal specialist, Dr. Brooke Goldner, Tadlock has just launched his first-ever book for vegan kids, entitled, “50 Comebacks for Vegan Kids.” This book (coupled with video series on Youtube and Solomon’s website) gives insightful and witty comebacks for children backed with a scientific explanation and Solomon’s unique perspective and charming humor. Tadlock’s foray into healthy eating isn’t new, however: his journey and learning began at a young age. For this reason, he understands that there is no age too early to start being cognizant of what you eat.

Where Tadlock’s Interest In Eating Green “Stemmed” From

Health and health benefits have always been paramount for Tadlock, stemming from childhood. He understood that serious diseases require serious life changes, perhaps earlier than most children, due to his mother’s diagnosis of lupus.  “I always felt like I was the most loved kid in the world,” Tadlock noted. “My mom was able to overcome Lupus using her vegan nutrition protocol, and I knew that after what she went through, she would never want me to be as sick as she had been. Especially after the doctors predicted that she would never be able to have children. I was her little miracle, and she always made me feel like I was.”

Even with the obvious benefits of eating more healthy and vegan, Tadlock often felt he was the victim of bullying as he often stood out from other students in the cafeteria. “It’s not always easy to be different. Kids will sometimes pick on you because you look different or eat differently, or really any reason that makes you stand out. In the past, some kids have tried to tease or bully me about my vegan diet, but it has never worked because I always had something to say back that made them back off,” mused Tadlock. “ I wanted to help other vegan kids be able to stand up to bullies and feel good about themselves. I decided a vegan comeback book would empower the kids who didn’t have something ready to say back. I’ve seen comeback books before, but I’ve never seen a vegan comeback book. The idea of helping kids around the world excited and motivated me to write this book!

Tadlock has his fair share of comebacks for children which escalated into adulthood.  One comment was:  “I saw that meat has B12 and vegetables don’t, so that means you need meat to be healthy.” The comeback is: “B12 doesn’t come from meat, it comes from the bacteria in poop. Vegans are on a no-poop diet!” And here is more the scientific way of describing it: B12 is produced by bacteria that live in the intestines of animals. In nature, when an animal stops to eat from a plant, he will fertilize that plant by pooping on it. Then when a person eats that plant, they will get some B12 from the poop left behind. Now that we wash our vegetables we’ll, we don’t get our B12 that way anymore, and we get our B12 from nutritional yeast or supplements rather than animal poop. Meat is contaminated with poop from when the animal is killed, so meat-eaters tend to eat more poop. Tadlock’s thoughts? Yuck, pass the vitamins.

It’s important for kids to be conscious about what they eat for a plethora of reasons. First of all, explains Tadlock, there are so many kids that are obese or sick with diabetes or high blood pressure or even cancer. Kids eating a healthier diet are going to be healthier kids. It’s also easier for children to eat healthier as adults if they were already used to eating that way as kids. Eating a vegan diet will not only help kids be healthier, but they are potentially saving the lives of thousands of animals as well–and hey, kids love animals! Most kids really care about the planet, after all, we want to enjoy the planet when we are adults as well! By eating a conscious plant-based diet, children will dramatically reduce their carbon footprint and the pollution caused by eating a meat-based diet.

Tadlock acknowledges that sometimes it may be difficult for a child to commit to a fully vegan diet. His tips for countering this are 1. Start simple. Kids don’t need different complex vegan meals every day. “My favorite things to eat are apples and avocado sandwiches and I happily eat them every day,” he said.  “You really just need one breakfast, one lunch, and a few dinner ideas and you are off to a great start! “2. Take it slow. You don’t need to change everything overnight. You can replace one food at a time until your kid is one hundred percent vegan. Celebrate every step in the right direction. You’re doing great! 3. “Tell them about all the animal lives they will save and the benefits for the planet,” he continues. “While thankfully most kids are not dealing with severe health issues yet, we all love animals and most of us are very interested in the environment, so reminding them about all they’re good they’re doing for the animals and the planet is a great way to keep kids motivated.”

Being a Woman CEO in Mental Health Tech, A Founder’s Story with Maggie Rose Macar

Tips To Improve Your Chances Of A Healthy Pregnancy