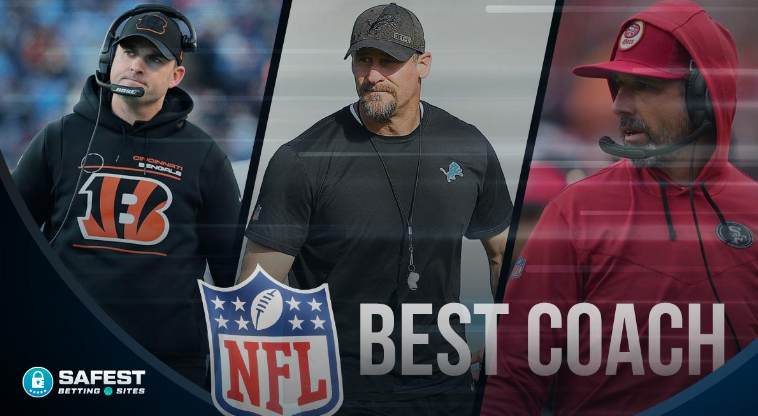 They lost 19-16 to the Cincinnati Bengals in an AFC divisional round game.

The Titans finished their 2022-2023 NFL season with a 7-10 record. They came in second behind the first-place Jacksonville Jaguars.

The NFL Coach of the Year award went to AFC teams for the last three seasons. The top three contenders this season all come from the NFC.

Odds associated with NFL Coach of the Year get listed in various sportsbooks. You may have to sign up and register an account. (You’ll find Super Bowl betting odds there as well.)

In the middle of January 2023, here are the top contenders for NFL Coach of the Year:

These odds depict a close race between the top three coaches.

When is NFL Coach of the Year announced? The winner gets declared on February 9 at the NFL Honors ceremony. A total of 50 members from the Associated Press cast their votes for the award.

With 20 years of coaching experience, Brian Daboll became head coach of the Giants in 2022. Before that, he won five Super Bowl rings as an assistant coach with the New England Patriots.

The Giants finished their 2021-2022 campaign in last place in the NFC East. They went 4-13, including 1-8 on the road and six straight losses to end the season.

The Giants went on to earn their first playoff appearance since 2016. They clinched a Wild Card spot to face the Minnesota Vikings in Minneapolis.

Kyle Shanahan won the AP NFL Assistant Coach of the Year in 2016 with the Atlanta Falcons. In the following year, he became the head coach of the 49ers.

Since then, he’s maintained an above-500 win percentage in the regular season. He’s gone 5-2 in the playoffs.

During their 2022-2023 season, the Niners soared into first place atop the NFC West. They won their final 10 games by an average of 16 points per contest.

Shanahan reached the postseason in three out of six years with the 49ers. The team lost in the NFC Championship to the Los Angeles Rams last year, 20-17.

In their Wild Card game this year, the 49ers won at home against the Seattle Seahawks, 41-23. They’ll keep their home-field advantage when they face the Dallas Cowboys.

With Shanahan, the Niners may reach their second consecutive NFC Championship game.

Eagles head coach Nick Sirianni started the 2022-2023 season with eight straight wins. That set a franchise record, in his second year with the team.

Sirianni went 9-8 in his first season with the Birds, including a 3-5 record at home. There was a massive improvement this year, as the Eagles went 7-2 at Lincoln Financial Field.

They scored the most points in their conference and second most in the NFL. For points against, the Eagles had the fourth-best defense in the NFC.

The last time the Eagles won the conference was in 2017; they went to the Super Bowl. They defeated the Patriots, 41-33, for their first Super Bowl win in franchise history.

At 41, Sirianni is the youngest head coach of the top three contenders. He’s led the team through controversy, strategic changes, and an injured star quarterback.

For those reasons, Sirianni remains favored to win this year’s NFL Head Coach of the Year.

Head coaches of the Jaguars, Bengals, and Lions each have a chance to win NFL Coach of the Year. The Bengals began with a rocky start to their season. They turned it around to win a tough division.

Likewise for the Jags, after a horrible season with a dysfunctional head coach. And with resiliency, the Lions ended four straight losing seasons to finish 9-8.

Skeptics might say that the best coach doesn’t always win the NFL Coach of the Year. It usually goes to teams in large markets for the sport. So, that makes Pederson, Taylor, and Campbell longshot bets.

The 11 Best Skiers Of All Time (Both Male & Female)

Blowout Feature, Game-Changer of Video Gaming World, is All Set for Launch