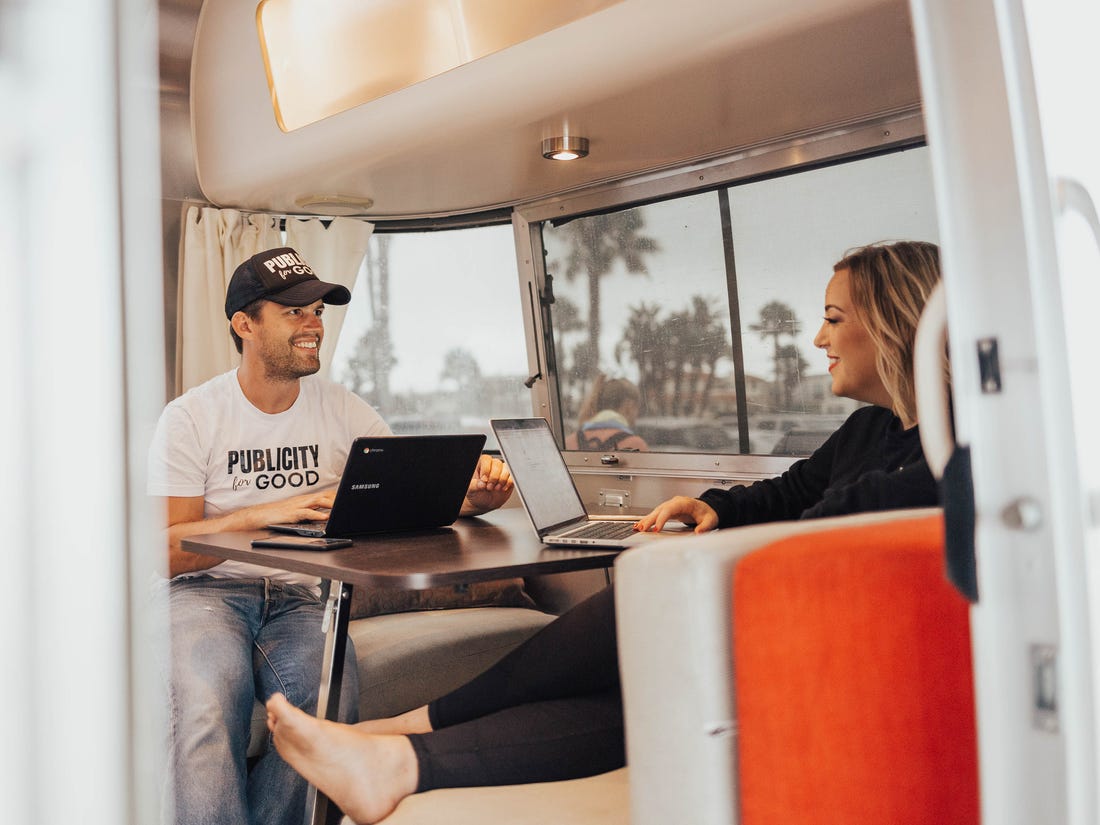 People around the world are struggling to adapt to the new normal: working from home if they can, often in the constant presence of their partners or roommates, stuck inside under lockdown.

Now imagine all that, but in a 23-foot Airstream trailer.

Such is the reality of Heather DeSantis, 31, former Miss Ohio International, and her fiancé, Austin Holmes, 32, who decided to leave life as they knew it and hit the road in a secondhand Airstream back in September.

The goal was to travel to 48 states to find a 100-acre farm somewhere in order to settle down before their December wedding.

Now, with travel bans in place, state and national parks closed, and RV parks and campgrounds deemed nonessential businesses in some states, van lifers — as people choosing to live and travel in vans, RVs, and trailers are known — are struggling to find a safe spot to shelter in place.

“With all of the state parks being closed and a current travel ban it’s been a very interesting journey,” DeSantis said.

DeSantis and Holmes are currently staying in an RV park in Asheville, North Carolina, having had to book their spot for a full month in order to be allowed to stay there.

The two of them say they spent a year and a half watching every TV show and YouTube video possible on tiny homes and van life, “weighing the pros and cons to the lifestyle” they were thinking about committing to before making the jump.

Before that, DeSantis was building a virtual PR agency out of her tiny, $1,500-a month apartment in San Diego at the time, and Holmes was just getting out of a seven-year stint in the Navy, where he was an explosive ordnance disposal technician.

“We had flexibility and freedom since I was my own boss,” she said. “We knew that [Holmes] getting a traditional nine to five job wasn’t going to cut it, especially when we want to be able to work really hard but have freedom. Freedom to go on a hike on a Friday, or when we have kids in the future being able to be present for them.”

She said that most people tend to live where their parents are, or where their job keeps them, but that they didn’t want to do that

DeSantis is from Ohio and Holmes is from Florida, but they wanted to choose a new place to settle based on their first-hand experience of it.

“What are the taxes, what are the people like, what’s the culture like, is it a growing community?” she asked, adding that they have a spreadsheet filled with research on places. “Really, our intention going on the road full-time in an Airstream was to find our 100-acre plot because we really want to get back to the basics of literally being able to feed ourselves and build our own homestead.”

Treya, as they affectionately call their Airstream, has a full-size bed, a bathroom with a sink and shower, a kitchenette with a mini fridge, stovetop, and microwave, and a dinette table

They bought the 23-foot Airstream secondhand in Ohio and made one single change to it: the addition of a standing desk.

DeSantis and Holmes were traveling the country, in a new place almost every three days, before hunkering down in Asheville in the midst of the coronavirus pandemic. DeSantis said the shower house is closed, and there are only around three other people there. It is also costing them almost $1,000 for the month, she said, which sort of defeats the purpose of downsizing. “It’s extremely stressful,” she said.

They’ve tried to make the trailer homier now that they spend so much time inside it: They splurged on a coffee maker, added some string lights, and even got a diffuser.

Since they only have a mini fridge, they go grocery shopping twice a week, but try to be savvy about their purchases to minimize errands. They buy staples such as milk and eggs, save room by buying wraps instead of loaves of bread, and stock up on long-lasting vegetables that don’t need to be refrigerated, such as sweet potatoes.

“Honestly, the biggest stress is reliable internet. That’s number one. Number two is we’re in a 23-foot confined space, living, working, doing everything,” she said.

Not being able to go to the gym, or have space for at-home workouts, is also getting to them. They also used to work in coffee shops and co-working spaces for a change of scenery, but can no longer do that, either.

“Those are the basic things that we want for happiness,” DeSantis said. “If we could have access to a gym once a week, work from a coffee shop, life would be great. But now we’re just super confined to our Airstream with unreliable internet, with not having clarity of what our next steps are because we don’t know when this is going to end.”

DeSantis and Holmes are also in business together

DeSantis founded a virtual PR agency, Publicity for Good, which works primarily with food and beverage companies as well as health and wellness influencers.

They run this agency together, alongside a software company that allows brands to pitch themselves directly to the media. They are also planning on launching a media company for positive news, and own real-estate units that they rent out to diversify their income.

DeSantis has been running a remote team for 4 years. She currently manages 11 people that live all over the US, and even the Philippines.

DeSantis, who said she has been promoting working from home for years, says transparency is very important and that her team has a daily huddle, as well as Monday meetings in which they share their agendas for the week.

“People that work from home get more done,” she said. “That’s going to catch on tremendously with everything going on. So we’re kind of excited to see that shift.”

She and Holmes also have a habit of “daily alignments,” where they review their intentions for the day every morning. “Living and working full time with your partner, I think alignment is key,” she said.

These “coffee thoughts” as they call them are both business and personal.

“We’re very open and transparent and we share if we were uncomfortable, or maybe I did something yesterday that was selfish and it hurt his feelings,” said DeSantis. “We share what our intentions are for the day so we’re on the same page.”

She says knowing what’s on everyone’s plate, and understanding their stressors is key, “so you understand where your partner is coming from instead of getting agitated.”

Having worked from home for years, DeSantis advises creating boundaries

Heather DeSantis Runs A PR Firm From Her Airstream

According to DeSantis, it’s important to not get stuck in a rut of just working 24/7. She suggests creating a specific time by which to log off every day, or even creating phone settings that will suppress notifications after a certain hour.

“It’s so easy to be on your phone all the time because you’re at home. What else am I going to do? Definitely set boundaries around social media,” she said.

“You can work late at night, you can work early in the morning,” she said, adding that it’s important to “just set boundaries and expectations that ‘this is the life I’m living.'”

She also suggests keeping a tidy, designated workspace to make it easier to focus.

Holmes said that he finds not having any separation between the physical location of work and home difficult. He combats this by being very intentional with his time and setting a schedule of what he wants to get accomplished and by when every day.

Pandemic or not, van life can be difficult

“We’ve made a lot of sacrifices to live this way. I think one of the things we miss the most is the community aspect of just having our friends to go out on date night with,” she said, adding that most people they encounter on the road are much older.

“You feel lonely, to be super transparent. It can feel lonely building a business and living in an Airstream, but we wanted to have this experience while we were still young, and go on hikes and see the amazing things that this country has to offer,” she said.

Another downside to van life is time spent planning your next move, packing up, and driving. They estimate usually spending around an hour or two a day planning their next stop.

“One of the sacrifices that you make having this lifestyle is you give up some of your time for logistics and moving around,” Holmes said. “Your schedule is definitely not the same as it would be. Weekends are less of a thing.”

However, they stress that van life is what you make of it. “Just like every other area of life you can choose to do pretty much whatever you want. I mean, you can sit in the Airstream all the time, which, you know, we’re experiencing right now, but you can take the active approach, you can take the foodie approach. It doesn’t have to be one thing or the other because it’s just a world of options.”