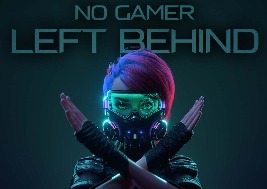 The gaming industry might be two decades old, but its boom has just begun. The idea of gaming was conceived by two students solely for the purpose of entertainment. As time went on, people became more invested and brought in new ideas to connect gaming with other industries, mainly with other multimedia platforms.

Today, its outreach in the world is unmatched. People are gradually realizing that the surge in the gaming industry is not just due to its entertainment factor but also because it entails more, such as social connections, health benefits, and most importantly, monetary growth.

Andrew Faridani, one of the co-founders of GAIMIN, believes that the gaming industry will only continue to grow. He says, “The gaming community embraced the value of emotional currency, online gold, digital tokens, in-game items, and other digital assets a decade before the rest of the world. It is anticipated gamers may well be at the vanguard of mass crypto adoption, since the gaming industry, in general, is one of the leading industries in adopting block chain technology.”

Keeping the facts clear in his head, Faridani, along with his friends and co-founders, came up with the idea of providing gamers with a platform to monetise the computational power of their PC, forming GAIMIN, one of the most advanced gaming companies across the world today.

Andrew Faridani along with Martin Speight, Clive Aroskin, Calvin Adamus, Robert Van Schaik and Buki Ben Nathan, who have known each other for more than twenty years, came up with the idea of creating a platform where gamers would be able to utilize their excess computational power and resources of their PC (while gaming or AFK) in return for gaming rewards. Working together in several countries across different continents, the team excels at solving problems and creating solutions together. That is how GAIMIN came into existence.

In 2017, the founding members established the UK- and Swiss-based gaming company, GAIMIN, aimed at helping PC users monetise the computational power of their PC.

To explain further, GAIMIN built an application that utilises the GPU/CPU when a PC is powered on, being used by the gamer or sitting idle. This application leverages the availability of underutilised PCs, creating a distributed data processing network and providing passive monetisation capability to users, allowing their devices to participate in the GAIMIN distributed data processing network. The application also provides users with a complete environment to receive rewards to enhance their gaming experience, including the purchase of games and gaming assets via the integrated marketplace and community.

One of the best features of GAIMIN is that the platform and monetisation application is free to download and does not require any credit cards to operate. After it’s downloaded and installed on the PC, the GAIMIN.IO platform automatically connects the gamer’s PC to its “Monetization Network”. This allows gamers to passively contribute their PC’s unused processing power.

The GAIMIN.IO platform has a built-in “AI engine,” which then directs the processing power to various monetization opportunities, such as video streams that require large amounts of computational power, rendering services or confirming and validating blockchain transactions. The mechanism utilised varies with device specification, performance and monetisation requirements at the given time.

Each monetisation mechanism has its own revenue generation capability, allowing GAIMIN to collect revenue from monetisation activities and return up to 90% back to the users. The GAIMIN AI Engine continually monitors the available devices and service requirements and automatically creates the appropriate monetising data processing network.

The users then receive GMRX tokens, GAIMIN.IO’s native tokens, as a reward for contributing their processing capacity. These tokens are generally used within the Gaimin.gg community and marketplace to purchase games, gaming assets and NFTs, and for P2P, or peer-to-peer, transactions, which include buying, selling, and renting.

There are many reasons why gamers opt to use GAIMIN to monetise their data, the major reason being its hassle-free working model. GAIMIN connects the world’s largest decentralized processing power supply, i.e., 1.5 billion gaming PCs in the global gaming community!

How Parlay Paul is Redefining The Sport Analytics Industry