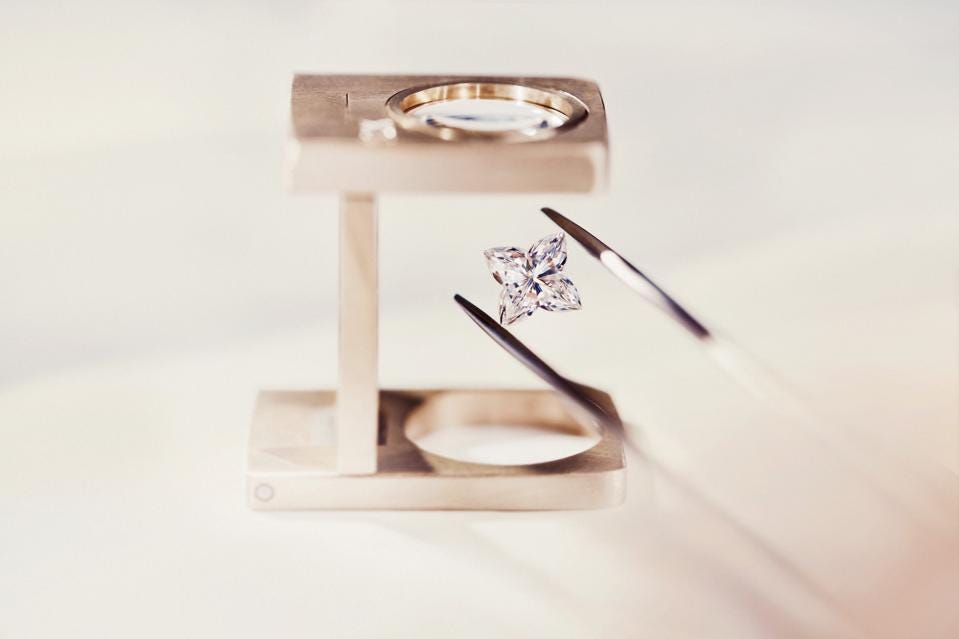 French fashion brand Louis Vuitton has released a much-awaited diamond collection called, LV Diamonds. These diamonds are designed by Francesca Amfitheatr, Louis Vuitton’s artistic director of watches and jewelry. It is based on the monogram flower, one of the brand’s most important symbols.

The centerpiece of this collection is a new and specialized cut called the LV Monogram Star diamond, with 53 facets and pointed ends. The diamond reprises the star-shaped monogram flower created by Georges-Louis Vuitton in 1896 in a range of rings, earrings, and pendants.

This collection enlists 22 rings, unisex bands, earrings, and pendants that pay tribute to the brand’s signature aesthetic debuts Monday (today) as part of a global pre-launch in the United States. The pieces are exclusively available at Louis Vuitton’s boutiques in New York Fifth Avenue and Los Angeles Rodeo Drive. The jewelry collection will launch internationally sometime in 2023.

Rings in platinum rose gold or half-pavé diamond settings pay tribute to the Art Deco style in which Gaston-Louis Vuitton adorned his suitcases in the 1920s and 1930s.

Each Louis Vuitton jewel with a central diamond comes with the “LV Diamonds Certificate,” a document that lists the diamond’s weight, color, clarity, and cut. It also tracks the source and handling of the diamond by using blockchain technology, which is the luxury brand’s way of promoting that its diamonds are sustainably sourced.

This special release comes as the company continues to look for a successor to Virgil Abloh for its menswear collections following his untimely death on November 28, 2021. According to our sources, after numerous exploratory leads, both have drawn up a shortlist of candidates and are close to making a final decision.

Seven months have passed since the death of its creative director, during which Louis Vuitton has presented two menswear collections riding on the legacy left by Virgil Abloh. Some believe that the house may take some time before making a decision. After all, LVMH did let a year go by before appointing Maria Grazia Chiuri as head of Christian Dior after the departure of Raf Simons.

However, on the other hand, expectations are high and, according to our sources, the group has looked at a dozen candidates. As CEO Michael Burke himself admitted to the press in early June, after Louis Vuitton’s last Spring/Summer 2023 show, the house should “take the next step.”

According to various reliable sources, a handful of potential names have remained in the running, with Martine Rose leading the pack. The English designer of Jamaican descent has been at the top of the list ever since the Paris label’s CEO was spotted in the front row at her fashion show in London in June, Vogue Business revealed.

Related Topics:DiamondsFashionLouis Vuitton
Up Next