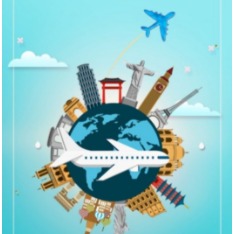 Over the past few years, traveling has become one of the most popular hobbies of many. One such citizen is Adam Vaughan, an air force veteran. He was introduced to the world of travel when he joined the airforce in 1998. He was deployed shortly after 9/11, where he began his global voyage. Joining the air force allowed him to travel to many places of different circumstances, conditions, cultures, and lifestyles. Looking back at his experiences, he mentions, “throughout all my deployments to worst parts of the world, I have developed an appreciation for those who had far less, those that were affected, and those that had nothing like we had.”

Vaughan was born in the suburbs of Omaha, Nebraska, where he spent the early years of his life playing baseball and pretending to be on a battlefield in the forest areas near his house. As an 11 years old boy, Adam was quite fascinated by the stories and myths surrounding countries like Germany, Japan, and Thailand. After joining the airforce in 1998, Adam was exposed to the world of travel, leading him to develop the urge to explore the culture, history, and many countries he had only heard the stories about. Vaughan developed an appreciation for different cultures and ways of life through his travel experiences.

Through his experiences, adam realized how vast and diverse the world was. His exposure to global inequality drove him to pour his attention into investing his time in the global community. For Adam, it was a captious experience and made him travel and explore all the world had to offer and adapt to the different cultures and lifestyles. Being an Air Force officer, Adam was allowed to travel to exciting and variegated parts of the world. He traveled to places he had never thought of traversing, like Sri Lanka, Germany, Malaysia, Singapore, and Ireland. Vaughan states, “throughout all my deployments to the worst areas in the world. I grew an appreciation for those who had far less, those who were affected, and those who had nothing compared to what we had.” Adam developed a subtle relationship with the global community through his experiences in parts of the world that he had not previously understood. Vaughan states that he would never opt for a career that doesn’t have travel as an integral part.

Managing the Global Operations at Meta

After retiring from Air Force, Vaughan started working at Meta as a Global Operations manager, allowing him to travel frequently worldwide to consort with the team members on various projects. As an Air Force officer, Vaughan learned that he has an infinite hunger to travel the world and get exposure to new cultures and lifestyles. At Meta, he realized he wanted to share his passion for traveling with the world.

Citizen Of The Earth

On his Instagram, his bio is written as “Citizen of the earth.” He hopes to inspire more people to travel as much as possible to discover the world far from their land and explore assorted cultures and lifestyles globally through his travel vlogs. His travel experiences in different parts of the world allowed him to believe that fundamental human rights and basic civil liberties should be guaranteed to everyone regardless of gender, age, or sexual orientation. Adam is keen to do something that can make a significant difference and positively impact the world. With his travel blogs, Vaughan believes in displaying the problems and the wonderments around the world, and he believes that through his traveling experiences, he can make a substantial positive impact on the planet. He considers his visual storytelling will lure people into traveling, discover what the world has to offer, and invite them to experience cultures more personally and in a meaningful way.

Spring Into a New Season With These Fitness Resolutions

The Bani Foundation: An Epitome of Peace, Divine Spirituality, And Utter Determination