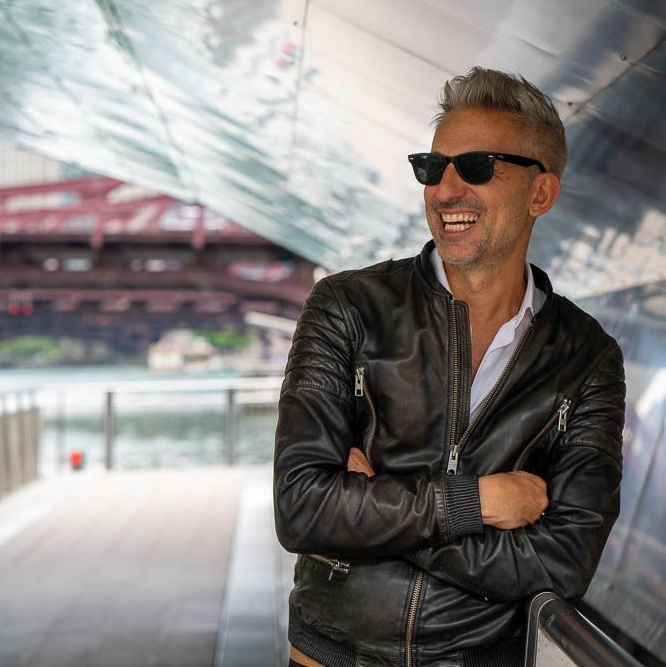 Andrea Angioli is a renaissance man. He is an advocate, husband, producer, photographer, and business owner. Yet, above all, Andrea is a storyteller, whether it is behind a camera lens, in a lecture hall, or at a dinner table.

And he does it well. Behind him stands a mountain of diverse movie titles that he produced, awards attributed to him and his work, and a list of the most renowned artists, publications, and companies that, at some point, have relied on Andrea’s expertise. Finally, behind him stands a legacy – a family history of three generations of storytellers that simply demands him to continue…

Andrea Angioli was born in Rome in the 1970s, where he inherited his boundless love for cinematography. Andrea is proud to belong to the family of a three-generations of professionals in the cinematography. His father, Remo Angioli, was an award-winning movie producer and distributor. His godfather Tomas Milian was a famous Italian actor, and his daring stepfathers, a gay couple, were costume designers, set decorators, and art directors. One of them, Veniero Colasanti (21 July 1910 – 3 June 1996), was nominated for the Academy Award in Best Art Direction for the film “El Cid” and won the Academy Award for the movie “Quo Vadis” as a set designer. Andrea grew up in a shadow of the giants that injected him with the audacity to be himself.

Andrea grew up in Cinecittà Studios, a 400,000 square meters of haven for movie production located in the very center of Rome. There, his not that childish task was to help his grandfather on a set. For Andrea, at an early age being involved in a movie production became a simulation of building a sandcastle in a playground. He loved it! After high school, Andrea began to pay his dues by officially starting to work in the movie industry. Andrea did it all. He worked as a boom man, sound engineer, runner, and secretary of production. He fondly remembers when during filming on Christmas night, his father made him work all night long on a set helping grips and electricians. Although, at that time these seemingly tiresome tasks seem not fair, they enriched Andrea with a 360-degree understanding of any movie production. Instead of being afraid to be unique, Andrea couldn’t wait for it.

Andrea’s father, Remo Angioli, taught him that no matter what the goal is always to make the best possible film, rather than money. He thought that only hard work and sacrifice could give Andrea the role that he deserved and that he needed to be familiar with the work and efforts of all crew. According to Remo Angioli, only mutual understanding could create a solid atmosphere on the set, which was an essential ingredient for a good film.

In the seventies, Remo Angioli decided to import the Bruce Lee movies and all the superheroes movie saga to Italy. It was unprecedented, and Andrea witnessed it from the first row (literally.) In the eighties, his father once more succeeded with the production of the cartoon Candy Candy, which was a success in Italy and worldwide. At that time, Andrea started learning film editing by practicing with his father’s old slow-motion technology in the following years.

At only 18 years old, Andrea started to produce his first movie, “Dark Bar,” shot in Zurich. The film was not only sold internationally, it was also shown in movie theaters. While another Andrea’s movie “Hunting Flies,” won the Solinas Award for the screenplay, and the Mystery Award for the Best Actress at the “Noir Festival.”

Among various roles that Andrea inhibited, being a producer has dominated his professional life, as it is his ultimate passion as a producer, Andrea chooses scripts or synopsis, he creates teams, picks locations, sets the production schedule and finances, and develops the overall theme. Following his father’s steps, Andrea prioritizes the process of choosing every single crew member and building the team. “The secret of success is harmony”, Andrea remembers’ s his father’s teachings. “With harmony- he continues, -you can achieve your goal and spread your message by simply communicating it.

As if movie production was not enough, Andrea started experimenting with documentaries, music videos, and photography. Later on, he also became a recognized photography producer. Andrea managed over 10 international photographers and worked with celebrities for magazines such as Vanity Fair, Hearst, Mondadori, GQ, Elle, and Hello. According to Andrea, the process is the same: to produce and create something different that would stimulate the viewer. Thus, hungry for a new experience, Andrea knocked at the doors of Conde Nast and Mondadori with a solution: the photoshoot production. “Give me the guidelines and the celebrity you want, and I will set up everything for you,”- he said. As result, he quickly took charge of creating a storytelling set for each photoshoot with a sole intent to show the realness of the world renowned professionals through the photography. Such international production was intense and challenging as it incorporated the most known artists of our generations, such as: Paz Vega, Owen Wilson, Nicole Kidman, Roberto Bolle, al Pacino, Dustin Hoffman, Natalie Portman, Courtney Love, James franco, Tilda Swinton, Zoe Kravitz, ralph Fiennes, Laura Pausini, Willem Dafoe, Ethan Hawke, Bianca balti, Christian bale, Elisa Sednaoui, Juliette Binoche, Monica Bellucci, Eva Herzigova, Andrea Bocelli, Eros Ramazzotti.

In 2013, Andrea founded PrimopianoTv Florida, which was based in Miami. It specializes in TV shows, photo campaigns, documentaries, photo shoots, music videos, and events. In that capacity Andrea produced commercials for such international powerhouses as AT&T, Hitachi, and Mcdonald’s. The same year, in Italy, he started a tv series production called “Italian Star Project,” a three-year series of 48 episodes that taught how to set up a movie, a photoshoot, or a music video. Each episode involved a celebrity and the necessary steps one needed to take to complete a set project.

One year later, Andrea created the TV series titled “Follow Me.” In each episode, well known artists brought the viewers to the city where they were born, revealing their habits, schools, parents, and friends. The President of the network signed for the series, demanding Andrea be personally involved as an actor because of his in depth understanding of the production.

Unfortunately, in July of 2016Andrea’s life took a different turn. While visiting the Bahamas to find a location for his upcoming movie production, Andrea got into a serious car accident. Andrea’s driver fell asleep, and the car crashed against an electricity pole starting the fire. At that point, Andrea realized that he couldn’t move his hands, legs, or limbs. That day, a terrible ordeal made of surgeries and hospitals began. According to the treating medics, Andrea was not supposed to walk again. It took him multiple months of endless physical therapies and an imaginary visit of Cinecittà Studios where he grew up in a shadow of three generation giants to finally walk again.

Needless to say, the accident changed Andrea. His faith increased as made his wish to do something good – to make a difference. He wanted to give back. In 2018, Andrea started to actively support “No More Tears” (www.nomoretearsusa.org), a non-profit organization fighting against human trafficking. Andrea admits that he gets asked a lot, of why he is so involved with this nonprofit, to which Andrea responds by sharing that he was touched by a traumatic accident that showed him firsthand that in a close proximity, there is a parallel world next to us that is much darker and more painful. Thus, today Andrea is determined to advocate for the trafficked victims by using the only weapon in his possession: make a movie or a documentary informing people that human trafficking exists and how people can help fight this terrible plague.

Andrea’s real love is movie production. He says it is the only thing that makes him feel good. For a period of three years, Andrea has been working on three cinematographic projects: Maria Callas, the series depicting an introspective trip into a young Callas’ life and all the horrible things she passed through before becoming a famous. Andrea wants to highlight the challenge of becoming a prominent female artist in a field dominated by males. Andrea’s second project “The B side of the vinyl” also focuses on supporting females while promoting a world of inclusivity.. This project is more than a documentary film, it’s a movement to celebrate women in music and give voice to women in an industry dominated mainly by men. For Andrea, the time is here to speak out and recognize the glory of incredible talents. It’s time that women stand together in the music business. As Gloria Steinem once said: “We have always been an equal part of the past. We just haven’t been a part of history.” So let’s make history!

Some production and distribution titles:

The Woman of Crime

Candy Candy, Can I Do It… ‘Til I Need Glasses?

Flight 90: Disaster on the Potomac

From a whisper to a scream with Vincent Price

Tears in the Rain with Sharon Stone