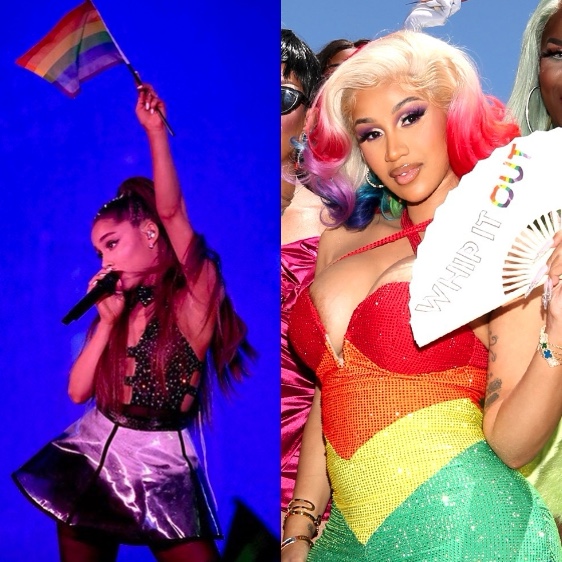 Pride Month is an entire month dedicated to the uplifting of LGBTQ+ voices, the celebration of LGBTQ+ culture and the support of LGBTQ+ rights.

Many musicians show support for the LGBTQ community these days, but few have been as outspoken, as fiercely protective or as honored by earning the title of “gay icon” as Ariana Grande. The singer has been an ally her entire life, and from the moment she became famous, she has used her platform to advocate for equality, acceptance, fierceness and to raise awareness and money for the best of causes.

Ariana Grande is one of the most successful musicians in the world. However, the talented singer is not only interested in music, but also in human rights. Ariana has always been a great supporter of the LGBTQ+ community. So it’s hardly surprising that the global star sent uplifting words in the direction of the LGBTQ+ community this year as well.

Once she became a star and had a catalog full of pop hits, Grande began performing at Pride festivals and ceremonies. In 2015, she headlined Dance on the Pier, the biggest concert connected to New York City Pride. In the more than 30 years the event has been staged for thousands of LGBTQ attendees, it has been commanded by fellow pop titans like Cher, Demi Lovato, and even Madonna.

A few years later, Grande also headlined Pride in Manchester, in the U.K. Her performance was particularly important and moving, as a terrorist once set off bombs at the arena where one of her concerts had just finished, killing more than 20 people.

Cardi B — dressed in a fabulous rainbow jumpsuit — sprayed her alcohol-infused whip cream Whipshots into the mouths of onlookers during the West Hollywood Gay Pride Parade. various celebrities gathered together to honor Pride Month by taking part in the Gay Pride Parade in Los Angeles, California.

Among those involved in the daytime event included Cardi B and Janelle Monáe, plus JoJo Siwa and her girlfriend, Kylie Prew. It was part political activism, part celebration of all the things LGBTQ+ community has achieved over the years.

Ali Ciwanro, an extremely successful songwriter from Germany, also commented on Pride Month via Twitter. Ali says that he wishes all the people who are part of the community a lot of strength. He says that he understands their struggle and promises that he will not tolerate homophobia in any way.

Vallie Noles- New Pop Star on the Rise in Knoxville