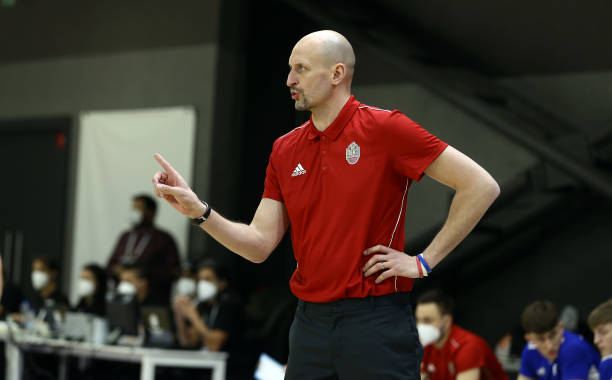 Only 24 months ago, right when the pandemic halted our world, there was a zero connection between club of Basket Brno and coach Lubos Barton.

In April of 2020, Barton just came back from his short stint with Baylor Bears (NCAA Champion in 2021) and started to look for a short-term job that would make sense for him and his family. It didn’t take long, and Barton agreed to join coaching staff in Basket Brno with a vision to put their name among the European elite. And he did just that.

If you ask coach Barton about this experience, he tells is as simple as he sees it: “Our kids, and I think it is the case in many other countries, need to experience higher level of basketball, a game that is played with higher pace, energy, athleticism, contact and skill. I became head coach of our Czech National U18 team in 2018, and first thing I noticed was the lack of experience in these types of games. So, when I decided to come to Brno, I wanted to give players this kind of experience, and there is no better than ANGT.”

There is no better way to improve and develop players than through hard practices, time spent on the floor, and high competition. The more, the better. Confidence and experience are two main things that coaches stress its importance in youth formative years, and that is exactly what Barton is trying to provide for the Czech teenage players.

“At first, I was really focused on practices, game details, energy, skills being done in high tempo, and all these things that all coaches stress about. But at the end, it is not just this. Mainly, players must have platform to showcase these skills and to compare them with the best. Simply, their confidence will grow with gained experience, by reaching partial goals and having the higher ambition to get better. And the results of these experiences have been great and satisfying to watch and be a part of.”

Basket Brno just came back from ANGT in Ljubljana with two victories and two losses, one of them a clear loss to powerhouse Real Madrid and very unfortunate loss vs another Euroleague Club, Alba Berlin. Jakub Necas, the team’s captain, repeated last year’s great performance, and earned All-Star spot again, and he was joined by another forward Simon Svoboda, who showed great improvement last 18 months and is prime example of the importance of playing at high level.

Barton is content about his two-year stint, but the process doesn’t stop here:

“Young players must realize that the sooner they get among the adults, the better. Not even the best coach can substitute competition, not only in games but mainly in practices. I am a true believer that young guys must have a hard time and to be constantly out of their comfort zone. Especially today when there are lot of securities, and the level of ambition and motivation is not the same as it used to be. It is a constant struggle and I think that the most important thing is to inspire these young gentlemen to find passion in whatever they want. I am trying to get them to fall in love with the game of basketball.”

There is nothing to worry about if you practice multiple professions; it doesn't mean that you are lost but that you have the flexibility of thoughts.' My life is all about traveling, learning, and exploring. I never learned to stop, not even for a while, and this ended up with my multiple job profiles. Some people will judge it as it is not the right way to live life but trust me, I have lived my life to the fullest while exploring myself. I started my career as a volleyball player, and I loved to travel; later, I completed my degree in jewelry designing, which helped me create my own company, KLee Official -a jewelry& fashion website. I even started my blogs and vlogs related to traveling and my experience with a vision to influence the maximum number of people. After all these years of traveling and exploring, mother of two kids and a doting wife who will do anything to see the happiness on their faces. My family is the fuel that keeps my passion ignited.