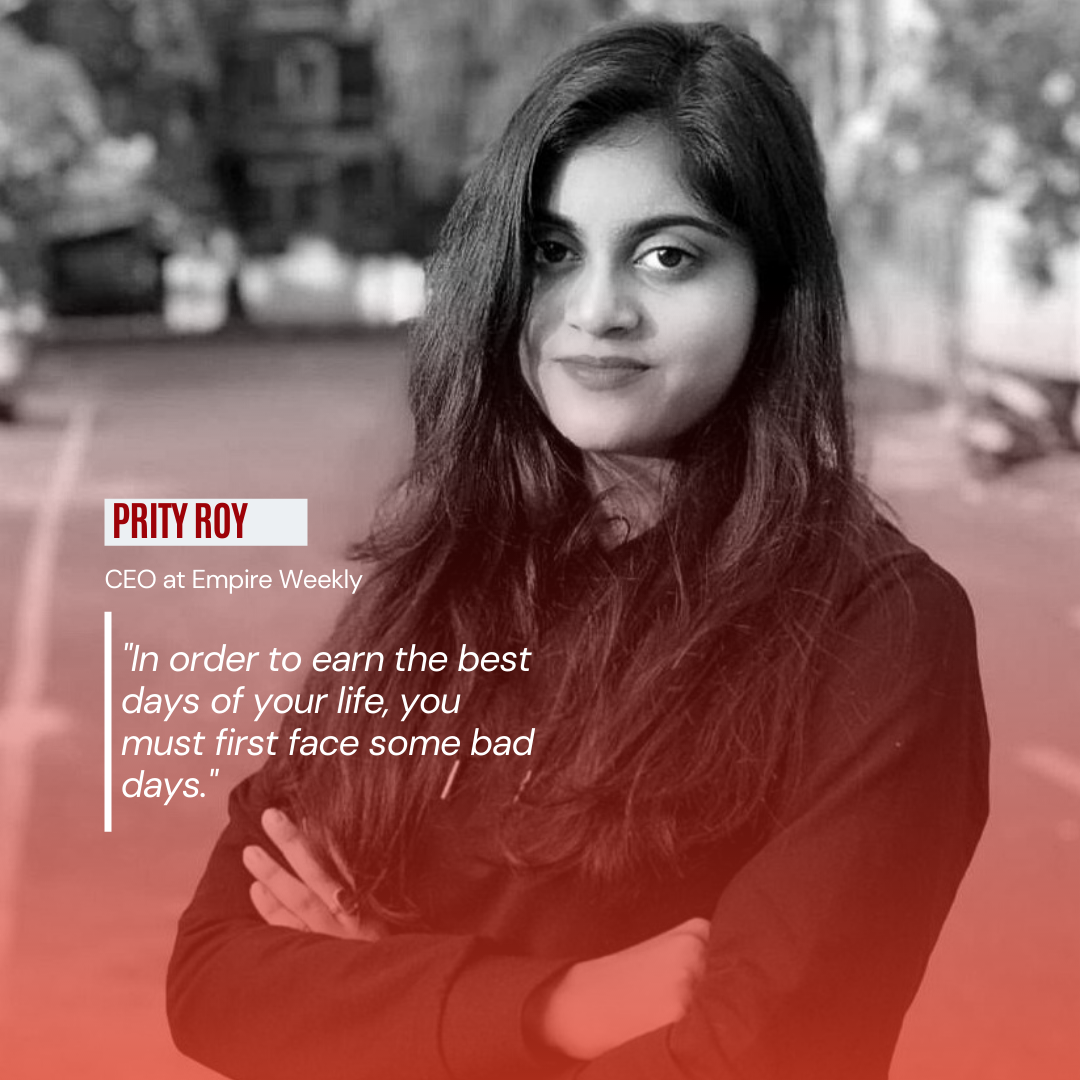 Women who never settle for the less are the women who do not bind themselves with the limits. Here is the story of one such young woman entrepreneur, Prity Roy, who is currently the CEO at Empire Weekly.

Prity is currently a final year student of GIBS Business School, pursuing her bachelor of business administration. From an early age, she had an interest in writing. Like most parents, her parents always wanted her to become a doctor. But in her later years, she realized that it was more important to follow her passions and dreams than to run after the rat race.

She believes in living a life on her terms. Soon, she started working with some of the publication houses where she published her anthologies. Her anthologies are available on Amazon as well. After her internship, she started working as a ghostwriter for several agencies. Her articles appeared on renowned websites of the world, which inspired her to aim for something that would give her recognition.

Prity started her career at Classicpreneur News and Media. She worked with her team to make the workplace more efficient. Her work motivated her to join as a Chief Human Resource officer at Uzi World Digital, an award-winning digital marketing solution company. It was that time when Ujwal Sharma, the founder of Uzi World Digital, noticed her work and guided her to the right path that was a turning point in Prity’s career. As a result, she began to focus more on her work and pick up new skills necessary to run a startup efficiently.

With her dedication, immense effort, and guidance from the founder of Uzi World Digital, Prity managed to become COO of the company. Well, the story does not end here as she is the CEO of Empire Weekly.

Prity’s intuition is a constant when it comes to doing something extraordinary from a young age, and she ensured that she used it to the fullest extent. Born in a small village of Hooghly district, West Bengal, her parents ensured that she had all the education and freedom a girl deserves.

Prity believes in never settling for less when you have the power to build an emperor. “Women have the potential to break all barriers to opportunities and achieve anything in the world when they want it bad enough. It is just a small spark that can change the entire story. No one in my family thought that I would come this far, but it was their support and my hard work which made to stand different from others.” Lessons learned from her past have always motivated her to move forward.

Apart from her professional life, Prity is a member of the World Youth Alliance and alumni of International MUN. She is a nationally selected kabaddi player and has participated in many other sports in her school times. She is also a member of the Management Fest Society and the placement committee head at her college and has organized various events with her team members.

Prity recently had the opportunity to coordinate a National Level webinar and Panel Discussion with distinguished professors, corporate leaders, and innovative minds from India. The college management appreciated her dedication to progress.

How To Combat Stress As A Mom In Today’s World