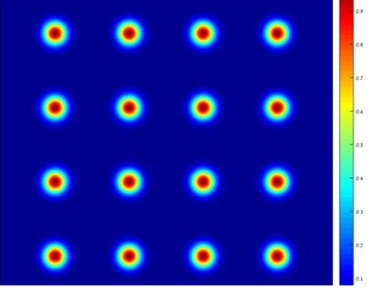 Broadband hybrid diffusers are optical elements that can perform optical transformations. They are a special type of optical beam shapers that combine the characteristics of diffractive and refractive beam shapers to obtain a beam shaper that can operate on a wide spectral range and with the great versatility provided by a diffractive optics.

To start with, a broadband diffuser is basically a variant of a micro lens array that is meant to be used as an optical beam shaper. The difference between a conventional micro lens array and the broadband diffuser is that in the latter the individual radii, cell shape and size of the lenslets composing the array can be made to vary from element to element. This provides a rather handy degree of freedom that can be used to obtain much better and complex optical transformations.

A broadband hybrid diffuser is obtained by taking the broadband diffuser one step further.  In this case, a fine modulation structure is added to the finished broadband diffuser. That is why this type of beam shaper is referred to as hybrid, since it combines the structure of refractive and diffractive optical elements.

The benefits of a broadband hybrid diffuser arise from harnessing the properties of both types of beam shapers. A simple broadband diffuser has the very useful feature that it can operate with minimum variation on a wide spectral range. This is due to the fact the chromatic dispersion is only due to the variation of the bulk material refractive index with wavelength. But at the same time, the kind of optical transformation that can be accomplished with a broadband diffuser is limited, even when considering the aforementioned extra degree of freedom provided by the varying curvature among the lenslets.

The addition of the modulation structure, which is a diffractive beam shaper, results in much tighter control of the output beam. This added diffractive structure ensures a better control over the divergence angles and this in turn yields a more homogenous output beam and non-symmetrical shaping possibilities.

Broadband hybrid diffusers can be used on a great variety of applications in which beam homogeneity is needed across a wide spectral range. One such application is in digital cinema projection. As is known, an imager, such as a liquid crystal panel or MEMs device, has to be illuminated with three different spectral sources, namely the red, green and blue light sources. Using a single broadband hybrid diffusers can ensure the homogeneity and the efficiency required for this application.

You can find more information about broadband hybrid diffuser here