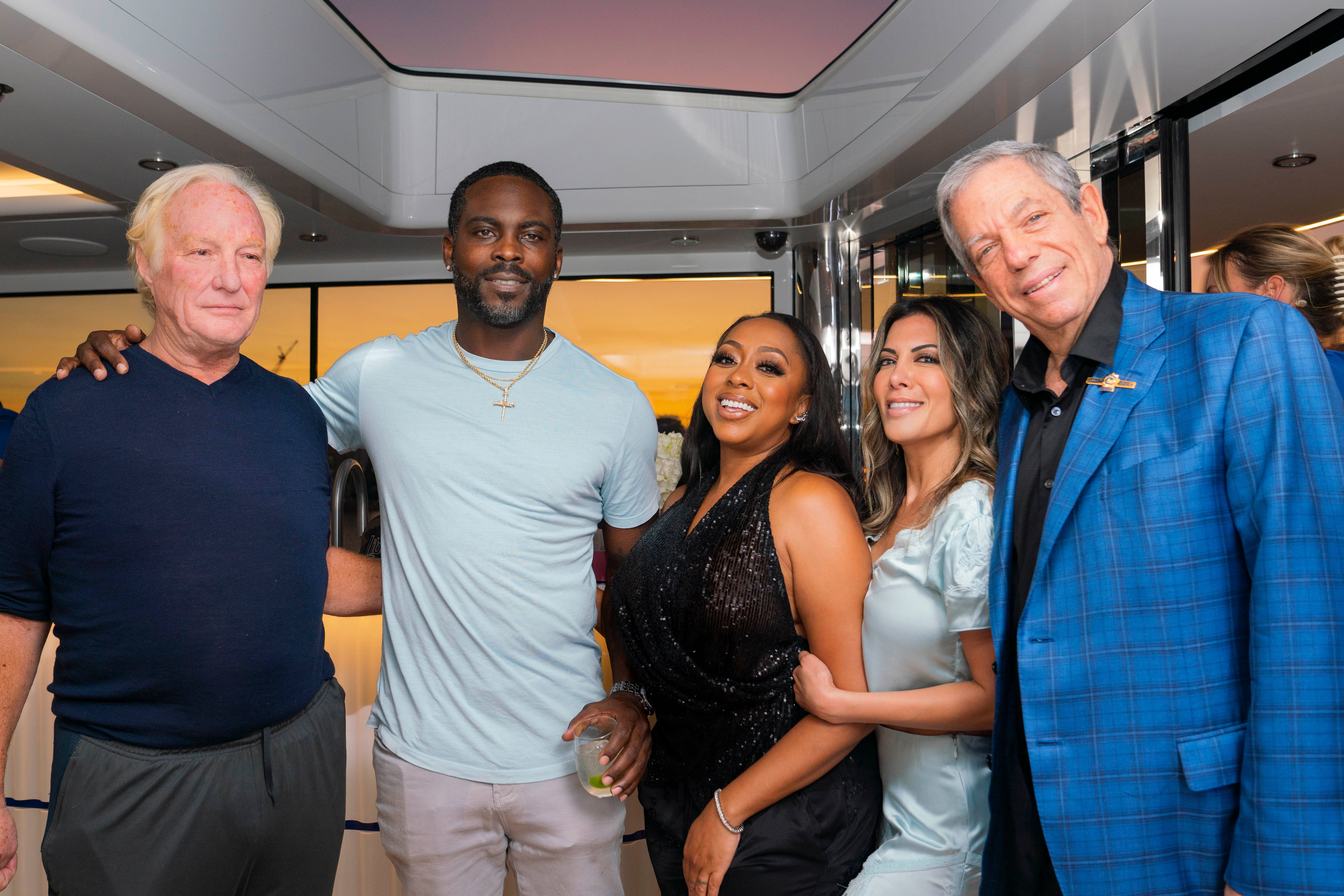 Is Fort Lauderdale going to become the next celebrity event destination like what happens to Miami during Art Basel? If the recent Ahoy Club x Sip Channé Monaco Megayacht Experience is an indication, we think yes! The celebrity studded sunset soiree held this past Wednesday, October 26th was the ultimate affair. Upon entering the CORAL OCEAN, the largest Megayacht at FLIBS, those who were lucky enough to secure an invite were transported to an ultra-luxurious experience inspired by the enchanting Mediterranean lifestyle, home of the 238’ Megayacht.

The sultry sounds of DJ Katie Ox and international musician LE//ON on the saxophone infused the ambiance as guests sipped on seductively crisp Channé Rosé, an award-winning rosé true to Provençal tradition, refreshing Location Venture Spritzers made in collaboration with Channé Blanc, an elegant white blend, an exclusive preview of the not-yet-released Sip Ahoy, an award-winning Australian Gin, and Tequila Tepozán. To hydrate between cocktails guests were seen drinking Dr. Perricone Hydrgen Water.

The Ahoy Club x Sip Channé Monaco Megayacht Experience was a true collaborative event hosted by TV personality and founder of Sip Channé Kavita Channe, founder of Super Luxury Group Alvaro Nuñez, founder of The Pontes Group Lais Pontes Greene, and Ahoy Club including CEO Ellie Malouf. Kavita Channe shared, “Years ago in Monaco, I had the pleasure of meeting the team from Ahoy Club. When I found out they were coming to FLIBS I instantly knew we had to do something together.  We created this experience to welcome the largest MEGAYACHT to Fort Lauderdale in true Sip Channé fashion bringing together the best people, drinks, caviar, canapés, music, vibes… you name it.”  Alvaro Nuñez added, “We were able to create a unique experience with an amazing turnout, and everyone had a really great time.”

The 63rd annual Fort Lauderdale International Boat Show brings in boats of all sizes to charter and purchase for over 100,000 people from around the globe to peruse. Yet, the best of the best can be found in the Superyacht Village including the venue host of the event. CORAL OCEAN, known initially as CORAL ISLAND, was built in 1994 and is one of the most iconic Lürssen superyachts ever built. The 73-meter yacht can accommodate up to twelve guests across six beautiful staterooms and was built to the designs of Jon Bannenberg; the convention-breaking legendary Australian designer universally acknowledged as the godfather of modern yacht design. CORAL OCEAN is currently available for charter for a cool $650 thousands Euros per week.

The Honey Trap Sensation: A Journey On Unravelling The Flip Side Life

Freelance writer covering start-ups, socially responsible brands, and the newest trends in the world around us. Have a cool story or product? Connect with me: melissamoraeswrites@gmail.com