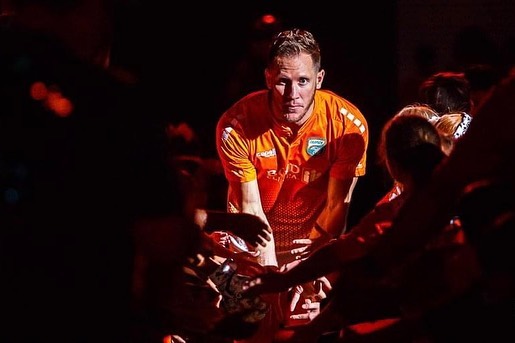 Major Arena Soccer League Defender of the Year for 2021-22, Chad Vandegriffe is a relatively new major asset of the Florida Tropics, with 44 appearances since his transfer to the team in 2020. Since joining the team, he was won Elite Six 2021-22, Regular Season Champion 2021, and All-Third Team 2021.

The 6-foot-1, 180-pound Vandegriffe has been playing professional outdoor/indoor soccer for ten years. He’s done well since starting his career with the St. Louis Ambush in 2013, winning All-Rookie Team 2013-2014.

His strengths as a player increased in 2016-2020 when he joined the Milwaukee Wave, scoring 19 goals and becoming Major Arena Soccer League Champion 2018-2019. Here, his capabilities as a defender began to truly shine and caught the eye of many fans and coaches alike.

Now with the Tropics, Vandegriffe led the league last year with 54 blocks in addition to five goals. Since joining, he’s never been stronger.

Before turning pro, he played for Chaminade College Preparatory School (Missouri), earning himself many accolades, including Defensive Player of the Year and a four-year letter winner.

Chad is known for the intense consistency of his play. His coach Clay Roberts has said that there’s not a single game he’s looked back at Vandegriffe’s play and thought he was the wrong choice. His consistency extends from his gameplay to his spirit as a leader, inspiring the team every game. He’s always elevating the play of everyone around him.

Coach Roberts was excited to pick Vandegriffe up a year after Drew Ruggles, both from the Milwaukee Wave. Ruggles won Defender of the Year in the 2019-20 season, so you could say Vandegriffe is following in his footsteps.

That said, Roberts has noticed that Drew goes for offensive opportunities more, while Chad is the better mainstay on the backline, which is the first point of emphasis for Tropics players. So, their styles are different, but equally strong.

Known for this superior defense before joining the Tropics, Chad has earned himself 32 goals over his career, making him a formidable offensive player in addition to his defensive strengths.

Still, his defensive play earned him his stripes, scoring blocks on some of the most unstoppable scorers in the league, including Vini Dantas of Baltimore Blast and Franc Tayou of Ontario Fury.

His combination of defensive play and consistent results led league broadcasters and media members to name him Defender of the Year in the 2021-22 season. With the Florida Tropics, he’s now alongside some of the best in the league. Each of them burning with a passion for taking down the longtime dominators of the league, the San Diego Sockers.

When asked about next year, Chad said he’s looking forward to the season and believes the team is on the right track to earn their first championship against the Sockers for fans across Florida.

For now, he’s enjoying his time at the top, and Coach Roberts has spoken of how much he deserves the honor after his fantastic year.

Naaman Taylor: Soldier, Father, Entrepreneur. This Entrepreneur Is Proving That You Can Do It All