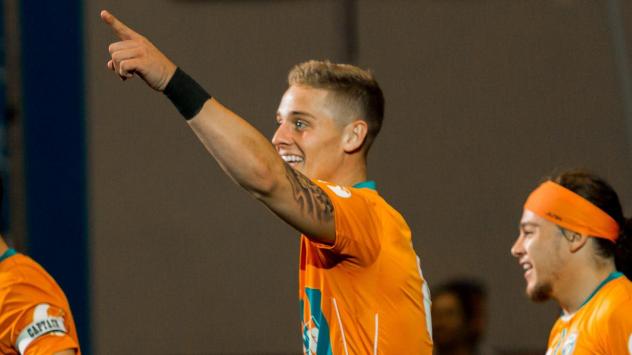 Major Arena Soccer League Rookie of the Year in 2018/19, 27-year-old Wisconsin native Zach Reget pushed himself to even greater heights with the Florida Tropics in the 2019/20 season with 36 points and is now continuing his ascent to 43 points in the 2021/22 season.

Reget got his start playing for Trinity International University as a starter. In his college years,  he was team captain, Offensive Player of the Year four years running, three-time MVP, and third overall on the list of all-time goal scorers.

Comparing his experiences between college and pro-ball, Reget has said that the professional in pro-ball is a big change. Preparation also plays a much larger role, as he finds you have to pay much closer attention to your nutrition.

In the off-season, he can be seen giving guidance to young athletes for their sports careers and their personal lives.

This leads to his second piece of advice, which is always to work harder than those around you. It’ll show if you’re hungrier for it than the next guy.

You need to jump at every opportunity you get; others will recognize it. Making opportunities for yourself is also crucial, like talking to your coach and networking. Always ask your coach for the areas where you can improve. You never know where your blind spots are. Then, do the work on your own.

While at first, soccer was purely fueled by passion for Reget, his interest in the game has matured through college. Going to a religious school, Zac began to see soccer as something more than just a game – it was his way of life. That realization actually better integrated it with the rest of his life, rather than making it even more of an overwhelming obsession.

Recently, Reget was chosen to compete in the 2021 FIFA World Cup for the U.S. Men’s Futsal National team and has been invited for tryouts this summer for the 2022 U.S. Soccer national side.

His biggest rivalry is with the San Diego Sockers, who beat the Florida Tropics two games to zero in the 2021/22 season.

Every year he feels himself and his team closer to overcoming them, but they haven’t won yet. It’s something he feels he needs to see through. He’s had a brilliant and successful career so far, but his face-offs with the San Diego Sockers have been his biggest obstacle to reaching the summit.

Finally, one thing Zac wishes he could tell his high school self is that nutrition can be your leg up on the competition. Not many high school athletes focus on nutrition, but it becomes important for everyone in the pro scene, so people will be impressed if you’re eating right. Also, to try to keep a clean social media – if you do make it big, branding will become huge, and you don’t want too many black spots on your record.

Elisabeth Hoekstra’s Transformation – Inspiring Others to Do the Same

Chad Vandegriffe’s Climb to Defender of the Year Is Inspiring