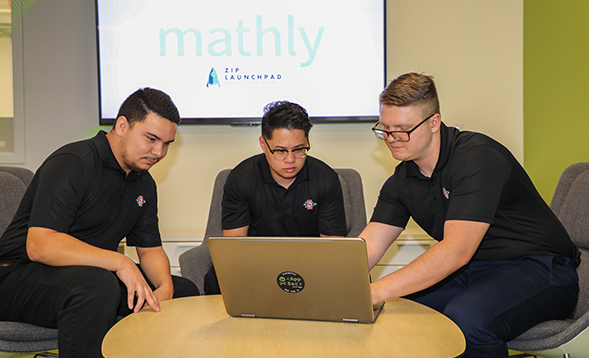 College student Robert Carpenter is the founder of mathly, an education app that aims to make learning fun, immersing, and rewarding for middle and high school students.

In this article, we learn the story of how Robert came from being an ordinary college student to changing the current online education system.

Have you ever wondered why most students dislike mathematics in universities and high schools? Well, mathematics is a subject that involves a lot of cognitive work, and students don’t really enjoy putting in that kind of effort.

Unlike other students, Robert loved math in high school. So much so that he tutored his colleagues. When he coached his colleagues, he noticed the lack of interest his students exhibited.

Basically, he found it challenging to get someone to love maths the way he did. It was at that moment an idea popped up in his mind.

Eventually, Robert met individuals who loved maths the way he did. He and his newfound friends met at Southwestern College in Chula Vista.

They all had the same problems with their students and immediately began discussing plans to launch a platform to help curb this problem.

This mindset has birthed a multitude of successful individuals- the need to fill in the gap and solve a problem.

Robert and his friends, now turned business partners, transferred to San Diego State University, and it was there they were given the opportunity to bring their vision to life.

While at San Diego, they were introduced to the ZIP Launchpad. The ZIP Launchpad is a business incubator that helps San Diego State University students build their own companies.

Robert and his partners took this opportunity and submitted their application.

A total of 76 teams applied for the programs, and only 13 teams pulled through and got to the first phase – Roberts team was part.

It’s been two months since then, and Robert and his partners have come a long way in the race. They’ve learned how to put together convincing business proposals that describe real-world problems and give adequate solutions to them.

Today, most online learning platforms like the prestigious khan Academy only teach students how to solve their maths problems, and that’s all. There’s no fun in the process, nothing to entice these students into learning more about maths.

Robert shares, “I’ve gone to Khan Academy to figure out trigonometry, for example, but it wasn’t out of a driving passion for learning, more because I had to master it, Mathly will have a user-friendly interface that engages and rewards students with positive reinforcement.”

Mathly aims to fill in the gaps in this market. Learning math can be fun!

Roberts’s team member sheds more light on the app, “Mathly solves the root problem of kids not being interested in math, who also don’t have the economic means for tuition.”

Unlike other online learning platforms, Mathly aims to be easy to use and come at a very affordable price.

Right now, the Mathly team is undergoing grassroots research at area schools, asking parents what challenges they face and what incentives they would be willing to offer their children.

They are also doing everything in their power to make their dream a reality.

“You need to have a passion for the problem, or you’re not going to put the work in.” -Robert.

In December, Robert and his team members will go in front of a review board to have their progress accessed. This will be the deciding factor on whether or not they will advance to the next round.

How Bagio White Became an Iconic Creative Director in the College